Please ensure Javascript is enabled for purposes of website accessibility
Log In Help Join The Motley Fool
Free Article Join Over 1 Million Premium Members And Get More In-Depth Stock Guidance and Research
By Rich Smith - Jun 1, 2021 at 11:48AM

Brazilian airplane manufacturer Embraer (ERJ 4.22%) shook up the air travel industry this morning by announcing it has formed an independent company called Eve Urban Air Mobility Solutions. The company said Eve will develop electric vertical takeoff and landing (eVTOL) aircraft for use as air taxis, and that it's already found a buyer for 200 of them. 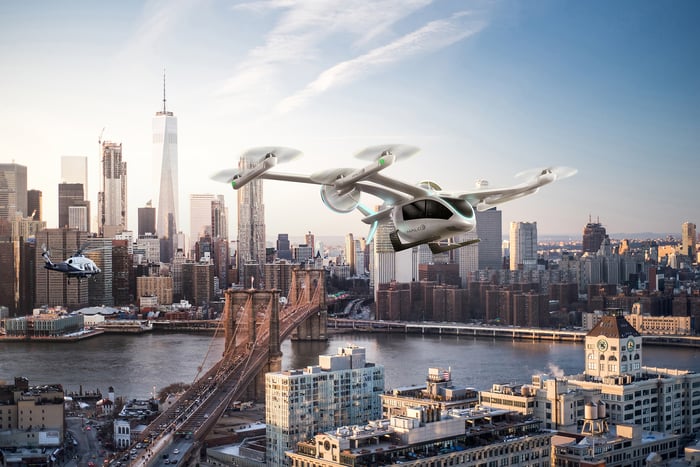 On Tuesday, Embraer and Halo -- a provider of helicopter travel services in the United States and the United Kingdom -- agreed to form a partnership. Eve will produce the eVTOL air taxis, Halo will acquire and operate 200 of them, and the two companies will collaborate on continued development of Eve's Urban Air Traffic Management system as well as fleet operations.

Halo will thus become the first customer for Eve's new product, with deliveries expected to begin by 2026. Halo will operate 100 of the electric aircraft in the U.S., and another 100 in the U.K.

The companies added that Halo is the brand name of the service, a joint effort by Halo Aviation in Britain and Associated Aircraft Group in the U.S. According to data from S&P Global Market Intelligence, both helicopter-transportation companies are private, and both share privately owned OneSky Network as their parent company.

According to all companies involved, creation of this partnership will make Eve -- and by extension Embraer --  a global leader in eVTOL aircraft.