Please ensure Javascript is enabled for purposes of website accessibility
Log In Help Join The Motley Fool
Free Article Join Over 1 Million Premium Members And Get More In-Depth Stock Guidance and Research
By Sam Swenson, CFA, CPA - Jun 3, 2021 at 6:05AM

Based on its upward moves this year, the surging meme stock is tempting a lot of traders.

AMC (AMC -8.40%) shares have surged by 400% thus far in 2021 while the S&P 500 index has risen 12% over the same period. Time to load up on AMC, right? Most likely not. For a number of reasons, the entire S&P 500 index will likely be the superior investment if held over the long term, while AMC stock may not be worth much of anything in a few years.

AMC: A fun story but not much more

Through Memorial Day weekend, AMC had returned nearly 1,000% in 2021 -- a fun statistic to read, no doubt. The stock's performance was largely driven by retail investors attempting to capitalize on the heavy short interest in the stock. In other words, hedge funds and other institutional traders had levied large bets that AMC's stock price would decline. This led to a Reddit-inspired share buying spree intended to force the price higher, pressuring those large short-sellers to buy shares so they could close out their short positions. This worked, which pushed the stock even higher and put further pressure on the remaining short-sellers, creating the vicious cycle known as a short squeeze.

However, the reality of AMC's business paints a pretty grim picture: The in-person movie-viewing experience is in extremely deep trouble. AMC's revenue was down 85% year over year in the first quarter, and the fundamental shifts occurring in the movie industry (including reduced seating capacity in theaters and the ubiquity of streaming video services) will make it difficult for AMC to regain any sort of solid footing without a complete re-imagining of the company's business model.

Anyone seriously considering AMC stock as a long-term holding is likely experiencing recency bias. In other words, they assume that because the stock has done well recently, it must be a great buy. The reality is that the best investments have strong potential for sustained future returns, not necessarily track records of stellar returns. Yet stocks that have done well in the recent past tend to stand out as more appealing. 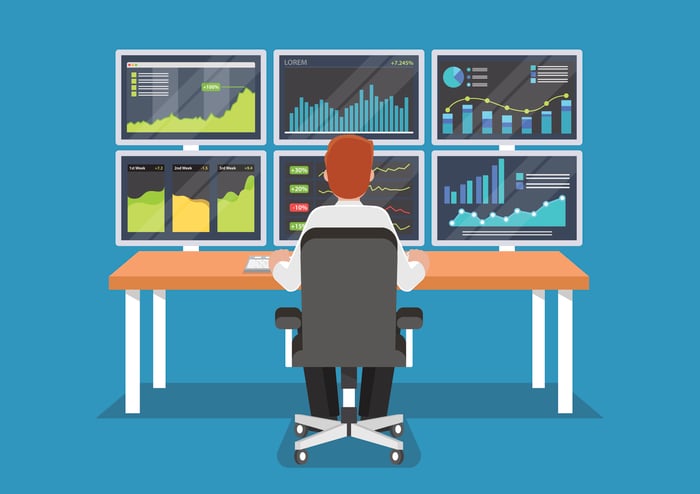 Those who consider themselves long-term investors will be hard-pressed to find a vehicle better suited to reasoned, tax-efficient growth than a simple index fund like the Vanguard S&P 500 ETF  (VOO -1.40%).

The S&P 500 comprises 500 of the largest U.S. corporations by market capitalization. Index funds based on it diversify investors away from company-specific risks. Even if a few of those major businesses do poorly or even completely fail, those negative results will be outweighed by the larger mass of companies that continue to generate revenue and, over time, grow their earnings.

The S&P 500 is also self-cleansing. A company like Enron or Kodak might be flying high at a certain point, but then fail miserably. If it loses its status as one of the nation's largest companies, it will soon be replaced in the index by a growing enterprise. The self-cleansing nature of broad market index funds makes them appealing options for nearly anyone -- depending on your risk tolerance and time horizon, of course.

A five-year examination of AMC vs. the S&P 500 index, based on a $10,000 initial investment in each, illuminates how different their performances have been. The broader market average has grown slowly and relatively steadily over that period, while AMC has gyrated in seemingly random fashion, with -- until very recently -- a generally downward direction. 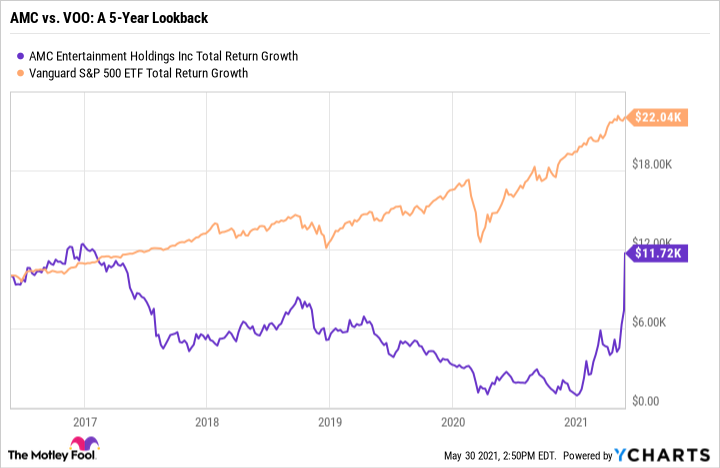 As a long-term portfolio holding, there are a lot of reasons to like an S&P 500 index. But if you can't seem to get away from the allure of an apparently hot stock, you might consider making a larger investment in an S&P 500 index fund and opening a small position in AMC. If you bet all of your cash on individual stocks like AMC, you might become the next meme-stock millionaire -- or you might be left with pennies on the dollar from your initial investment. So be sure to diversify your portfolio, whether it's by using index funds or by buying enough different stocks to make your portfolio resilient.