Please ensure Javascript is enabled for purposes of website accessibility
Log In Help Join The Motley Fool
Free Article Join Over 1 Million Premium Members And Get More In-Depth Stock Guidance and Research
By Rick Munarriz - Jun 3, 2021 at 8:05AM

The world's most visited theme park is ready to bring back a popular seasonal event.

It will be treats -- and not tricks -- on display at Central Florida's leading theme parks this Halloween season. Disney (DIS 3.30%) announced this week that it will start selling tickets on June 15 for Disney After Hours Boo Bash, a separately ticketed event that will take place across 23 different nights at Disney World's Magic Kingdom.

Purists will argue that it falls short of the long-running Mickey's Not-So-Scary Halloween Party that it had to cancel last year. The new price point is also something that only a shareholder will love. However, this is an important step back to normalcy, as Disney World and Comcast's (CMCSA 1.52%) Universal Orlando return to cashing in during the tourist-hungry Halloween season after having to pare back on the monetization last year. 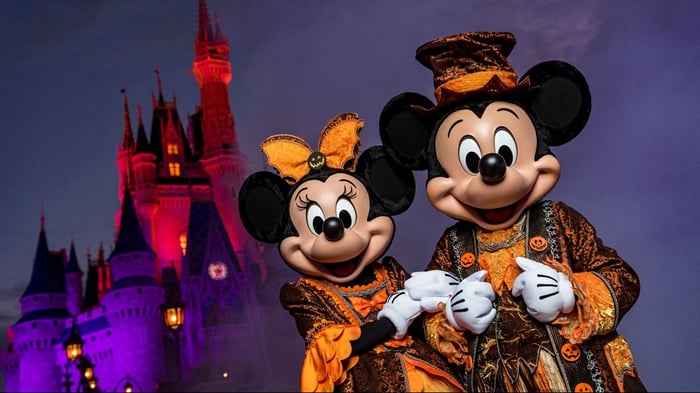 A lot of Disney After Hours Boo Bash will seem familiar. Guests will be allowed to don costumes, hit up candy stations for generous handfuls of treats, and take in photo ops with characters rarely scene in the parks. Many of the theme-park rides will also be available, typically with shorter lines as Disney caps event admissions to roughly 20,000 guests, a little more than a third of the pre-pandemic daily average.

Some things will be different. Instead of themed character parades that can clog up park pathways for chunks of time, Disney is going with the shorter cavalcades throughout the evening. There's also no mention of fireworks signature live shows, but that may change between now and when the event kicks off on Aug. 10.

Another big difference is that Disney After Hours Boo Bash will be just three hours long, shorter than its predecessor. However, the biggest difference will be felt in your pocketbook. Adult tickets for Mickey's Not-So-Scary Halloween Party fetched between $79 and $135 a night in 2019, the last year that the event took place. A special $299 pass was available that included access to all but one of the three-dozen nights.

When tickets for last year's family-friendly Halloween event went briefly on sale in the springtime of last year, 2020 prices peaked at $149. This year, admissions start at $129, going as high as $199 on Halloween itself. Disney is throwing in complimentary ice cream bars and soft drinks to help offset the sticker shock and shorter hours. It's not much of a trade unless you really like Mickey Mouse novelty bars, but tickets will sell briskly.

Disney fans have had to wait two years for a hard-ticketed Halloween event. The economy's also bouncing back quickly, backed partly by vacation money that wasn't spent last year.

Disney After Hours Boo Bash and Halloween Horror Nights at Comcast's Universal Orlando will be wildly popular this year. Guests will pay up for the creature comforts of creature discomforts -- and shareholders will be happy to see their travel and tourism stocks earn their keep again.