Please ensure Javascript is enabled for purposes of website accessibility
Log In Help Join The Motley Fool
Free Article Join Over 1 Million Premium Members And Get More In-Depth Stock Guidance and Research
By Will Healy - Updated Jun 4, 2021 at 3:12PM

Two stocks would likely experience a massive, direct benefit from such a change.

As the original cryptocurrency, Bitcoin (BTC -0.38%) has received increased attention as it delivers massive returns to long-term investors. Some have speculated it could replace or at least compete with the U.S. dollar, and in some respects, that has come true. Many who live in economically unstable countries turn to Bitcoin instead of the U.S. dollar for storing value, making purchases, and tracking spending.

Although the Treasury Department has shown no inclination toward dropping the U.S. dollar in favor of Bitcoin, Coinbase (COIN -2.41%) and Square (SQ -1.26%) would almost certainly benefit from such a replacement. 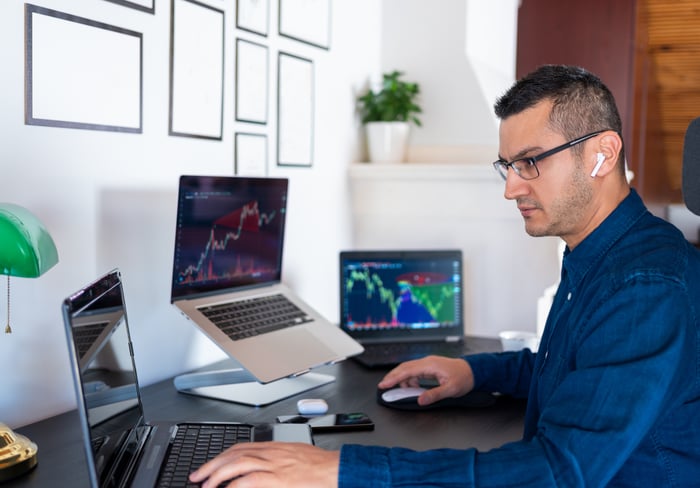 Coinbase "powers the cryptoeconomy." It has run an exchange for crypto since its founding in 2012. Admittedly, Coinbase is not the only crypto exchange in existence. However, it achieved first-mover status in the industry. This gave it a head start and name recognition that most competitors have not attained.

Also, Coinbase is the only pure-play crypto exchange trading on the stock market today. This means that the company competes with few others for the attention of stock investors.

Additionally, Coinbase offers an easy-to-use platform, lowering the likelihood its customers will turn to the company's peers. Today, about 56 million verified users in over 100 countries trade crypto on Coinbase's site.

Now, the massive increase in crypto interest in the last year has accrued to Coinbase's top and bottom lines. In its first earnings release, it reported total revenue of $1.8 billion in the first quarter of 2021, an increase of nine-fold from year-ago levels.

Also, net income came in at $771 million, 24 times higher than the Q1 2020 profit of $32 million. Since operating expenses climbed by just over fivefold, net income outpaced the revenue growth rate despite a 75-fold increase in income tax expenses.

Admittedly, with Coinbase trading at 22 times its book value, the stock appears expensive. This may partially explain why Coinbase stock has fallen steadily since its April IPO. Crypto prices have also come off their highs during that time, likely adding to pressure on the sock.

However, if Bitcoin became the official currency, conditions would almost certainly turn in Coinbase's favor. With Bitcoin becoming indispensable for the general population instead of just crypto investors, its importance to the economy would probably make the bull case for Coinbase by itself.

Bitcoin exchange has also become a significant revenue source for Square. Square's stock shot to record highs in 2020 as the pandemic induced more consumers to embrace fintech solutions. Nonetheless, Bitcoin became one of those favored revenue sources for Square's Cash App as more than 3 million users traded on the platform in 2020.

Since Square designed Cash App to disburse and collect funds, it serves as the perfect segue for a Bitcoin-denominated economy. Moreover, it has built a substantial lead on PayPal's Venmo, a competing virtual cash platform that did not accommodate crypto transactions until earlier this year.

That capability has expanded further with the launch of Square Bank. The bank allows Square to loan money without the involvement of a third party. Also, Bloomberg recently reported that this bank will soon offer business checking and business savings accounts. This places traditional banking and fintech under one umbrella for business finance.

Accounting rules force Square to log the value of Bitcoin traded, and that skews results. Nonetheless, Bitcoin revenue came in at $4.6 billion in 2020, a nearly ninefold increase from the $516 million reported in 2019. Moreover, in the first quarter of 2021 alone, Bitcoin revenue grew to $3.5 billion, more than eleven times the $308 million from the year-ago quarter.

Finally, the fact that Q1 2021 revenue amounted to 76% of full-year 2020 revenue shows Bitcoin's rapid growth despite holding no official status. If Bitcoin became the official currency, Square's financial ecosystem combined with Bitcoin trading abilities would arguably make it the most essential fintech stock.