Shares of Array Technologies (ARRY 2.82%) were crushed after the company reported earnings on May 11. The solar project technology company's stock dropped 46% the following day. For the full month, shares of Array were down 42.1%, according to data provided by S&P Global Market Intelligence.

The negative sentiment came from a combination of items in the company's first-quarter earnings report. The manufacturer of products for utility-scale solar power projects slightly missed analyst profit expectations, with CEO Jim Fusaro noting "higher than expected logistics costs." But investors were spooked further when CFO Nipul Patel added "we are not able to affirm our previously provided guidance for the full year" until the company reassesses open contracts to adjust for rising steel and freight costs. 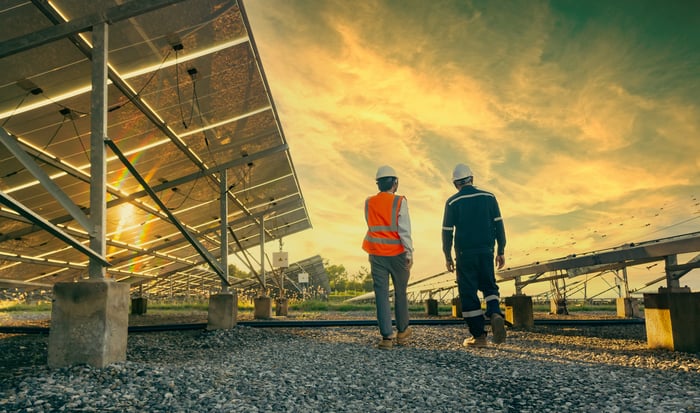 The company utilizes a large amount of steel for the framing of its large-scale ground-mounted solar systems. Steel price futures as measured by the Hot-Rolled Coil Steel Index (CRU) continue to hold record highs at about $1,650 per ton. That's about 225% higher than just one year ago. Patel said with its review of open contracts, Array will determine what costs it will pass along to customers. He concluded that the company would provide further guidance once "commodity and shipping prices remain stable for a long enough period of time to give us confidence in using them to develop a forecast for the remainder of the year."

The company is also taking proactive measures to address steel costs. On the same day it released earnings, Array announced it forged a supply agreement with North America's largest steelmaker. The agreement with Nucor (NUE -0.32%) aims to benefit both companies.

Under the agreement, Nucor will supply the solar company with torque tubes and rolled steel, which are needed for Array's production of several parts and components used in its solar systems. Nucor COO Dave Sumoski said in a statement, "Both Nucor and Array recognize that the transition to a clean energy future begins at home, and we're honored to be both a supplier and a customer for the U.S. solar energy industry."

The agreement likely gives Array more visibility for costs related to its steel needs going forward. But it doesn't take away from the fact that the costs have increased dramatically in the last year. Until new guidance is issued, investors who don't like uncertainty will probably steer clear of Array. Longer-term investors who believe in the growth trends in solar projects might find the May stock drop to be an intriguing entry point, however.

Why Array Technologies Stock Crashed in 2021