As energy stocks go, Tellurian (TELL 5.50%) has always been considered a high-risk, high-potential reward sort of company, with a great deal of uncertainty about whether the risk would pay off. In May, the company announced solid progress in its natural gas export plan, causing the stock to gain 96.8%, according to data provided by S&P Global Market Intelligence.

Tellurian's business is built around a plan to export liquefied natural gas (LNG). In theory, it is a huge potential opportunity: North America has ample supplies of low-cost natural gas, and when liquified, that gas can be shipped in large quantities to markets where it is in demand. Cheniere Energy has had success exporting LNG, and Tellurian, which was established by one of Cheniere's founders, is attempting to build its Driftwood LNG export facility on the west bank of the Calcasieu River, south of Lake Charles, Louisiana. 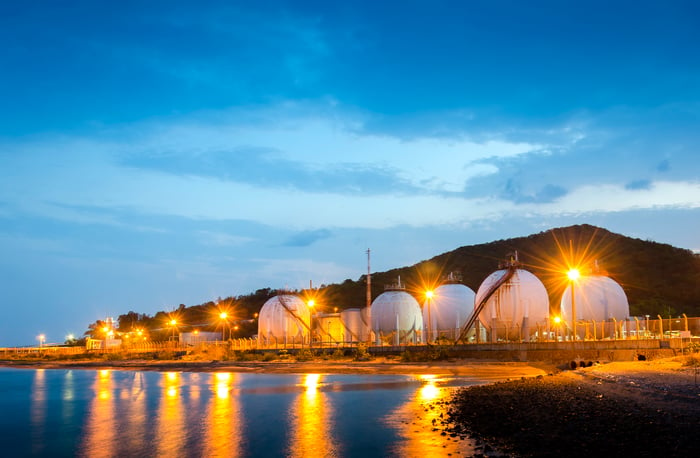 The problem is building a new export facility is expensive, even without concerns such as a pandemic, and Tellurian needs commercial support to make Driftwood a reality. The company got a much-needed boost in May when it announced an agreement to supply Gunvor Singapore with 3 million tonnes per annum (mtpa) of LNG over a 10-year period. That agreement covers more than 10% of the facility's proposed 27.6 mtpa capacity.

The agreement is the second major milestone for Tellurian, following a 2019 deal with Total to sell 1 mtpa of Driftwood LNG to the French oil giant. Total also agreed to invest $500 million in the project.

The deal with Gunvor Singapore is a huge step in the right direction, but investors should be mindful that it is only one small step toward the goal. The company has said it is working with four to five LNG buyers on contracts representing 12 to 15 mtpa of LNG. Those contracts are vital to making Driftwood a reality.

Tellurian is off the mat, but it still has a way to go. Even after nearly doubling in May, the stock is still down 32% since the beginning of 2020. Investors had all but lost hope last year during the pandemic, but with each new agreement that hope is slowly being restored.

Down Around 40% From Its High, Could Tellurian Stock Still Be a Long-Term Winner?