Please ensure Javascript is enabled for purposes of website accessibility
Log In Help Join The Motley Fool
Free Article Join Over 1 Million Premium Members And Get More In-Depth Stock Guidance and Research
By Jason Hawthorne – Jun 5, 2021 at 9:19AM

As hospitals address the major backlog of pandemic-postponed elective surgeries, medical device makers -- and their stock prices -- could benefit.

At various points during the pandemic, many states mandated that hospitals temporarily stop performing elective surgeries -- a policy decision made to preserve intensive care beds, personnel, and vital medical supplies, and to reduce the chances of patients becoming infected with COVID-19 in hospitals. However, from a financial standpoint, these restrictions added to the strain on healthcare systems, as many of the procedures that were put on hold are big moneymakers for hospitals. And in the medical devices segment of the industry, revenues fell because hospitals had less need to buy the equipment used to perform those surgeries.

That's why keeping an eye on the trends in elective procedure rates can help investors gauge just how fast the companies that sell those medical devices will recover. For Stryker (SYK -1.43%), Johnson & Johnson (JNJ -0.71%), and Zimmer Biomet Holdings (ZBH -2.40%), there are finally rays of hope. The medical device segment could be a laggard on the road to economic recovery, but that lag offers investors an opportunity to pick up shares before these companies' sales and profits rebound. 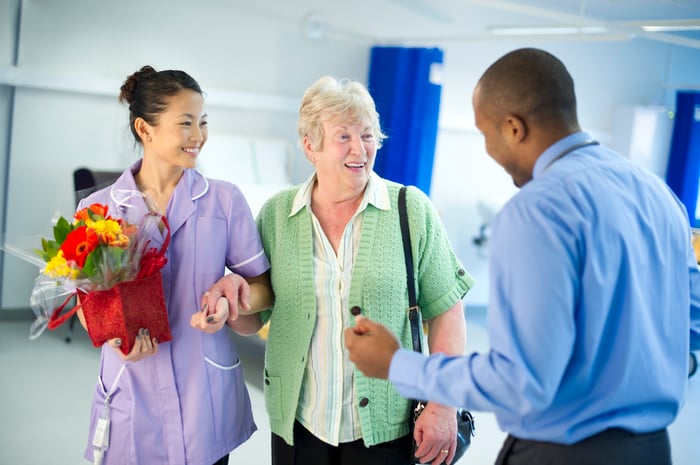 The first quarter was still sluggish

All three of these companies' CEOs had plenty to say about their organizations' sluggish start to 2021. Even though daily new case counts in the U.S. are now down by 96% from their peak, that peak occurred in mid-January. For that reason, their first-quarter numbers still left a lot to be desired.

Stryker CEO Kevin Lobo said the delays in elective procedures affected hip and knee surgeries most of all. In the U.S., its net sales in the knee and hip categories were $480 million in the quarter, down 8% from the same quarter last year. That was still an improvement compared to the 13% drop for the combined categories in 2020 versus 2019.

Relatively speaking, Johnson & Johnson had a strong first-quarter performance in the orthopedics category with a 3.7% gain. Strength elsewhere was offset by weakness in knee surgeries. CEO Alex Gorsky described those procedures as perhaps the most elective of all surgeries. It showed. For the period, Johnson & Johnson's revenue from knee surgeries, at $317 million, was down 7.6% compared to Q1 of last year. On the other hand, hip surgery revenue actually climbed 5.8%.

Zimmer Biomet saw results similar to Johnson & Johnson. Its first-quarter revenue from knee surgeries was down by about 2.3% to $614 million, and sales in that category fell 5.1% in the Americas. Hip surgery related sales rose 3.3% to $447 million. But there too, growth was weaker in the Americas region at 1.1%.

Despite those gloomy numbers, the companies offered positive comments about the trajectories of elective procedures. As U.S. COVID-19 vaccination rates surged and new case rates plunged, restrictions on hospitals were lifted, and knee and hip surgeries got back on track by April.

Spring brought a return to normal

Despite the caveat that it was only one month, Stryker's Lobo highlighted significant improvements in April. He didn't specify between knees and hips, but did say revenues for both were up by mid-single-digit percentages year over year. J&J's Gorsky didn't offer specifics either, but said that the trends at the end of the first quarter offered good reason to expect the second and third quarters to be strong.

Projections from Zimmer Biomet were less sanguine. The company exited March with sales still down compared to last year, and expects to exit the second quarter with revenues in line with their 2019 levels. That speaks directly to the state of elective procedures: Unlike diversified healthcare giant Johnson & Johnson, about 60% of Zimmer's business comes from hip and knee surgeries.

After a long period of postponed procedures, there's a backlog of demand among patients. Hospital system HCA Healthcare (HCA -2.07%) is already confirming the resurgence. In its first-quarter earnings call, management noted that year-over-year outpatient revenues were lower in January and February, but grew 30% in March thanks in large part to doctors catching up on delayed procedures. That could create systemic issues as the year goes on. Just this week, hospitals in Australia were forced to delay some elective procedures as their volumes were interfering with the treatment of patients who had more pressing needs.

The next surge: elective surgeries

It will be hard to avoid problems in a U.S. healthcare system that is already stretched thin. One estimate from the consultancy McKinsey & Company sees a backlog of a million spinal fusion and joint replacement surgeries alone. However, preparations are underway to deal with the influx of those patients. And that's good news for the companies selling surgical equipment and supplies.

HCA has more than 10 new ambulatory surgery centers under development. Further, the company believes it has learned from its experiences during the pandemic. It streamlined its discharge processes and case management in ways that freed up capacity by helping patients leave hospitals faster. Just as recessions can drive changes that strengthen great companies, the pandemic forced hospital systems to get leaner and find ways to better allocate their resources. Those institutions that were able to do that well could experience outsize benefits as the wave of patients whose surgeries were delayed hits.

The medical device companies are also expecting to benefit from the surge. After a year of revenue declines, Stryker is expecting sales this year to come in about 5% above their 2019 levels. Sales at Johnson & Johnson were essentially flat last year, and management expects revenue for 2021 to be 10% higher than 2019. Of course, because it's a highly diversified company (with a COVID-19 vaccine), elective procedures don't do as much to move the needle at J&J.

Zimmer Biomet's figures, on the other hand, are perhaps the best indicators about what's happening with all the surgeries that were delayed. After its revenues fell 12% in 2020, the company is projecting this year's top line will be 2.5% higher than 2019's.

Those may not be impressive growth numbers, but after a year of postponed procedures and declining revenues, they're a welcome change. Given that the recovery in elective surgery volume may just be getting started, this could be the right time for savvy investors to add shares of these companies to their portfolios, before sales and profits rebound.