Please ensure Javascript is enabled for purposes of website accessibility
Log In Help Join The Motley Fool
Free Article Join Over 1 Million Premium Members And Get More In-Depth Stock Guidance and Research
By Brett Schafer - Jun 6, 2021 at 6:15AM

This is a growing industry with a long runway ahead of it.

As more and more of our time is spent online and transacting through digital methods instead of cash, corporations are having a harder time preventing financial fraud. One of the best ways companies can combat fraud is by employing identity solutions software, which verifies customers are actually who they say they are.

The identity verification market is expected to grow at a 13.4% compound annual growth rate (CAGR) and reach $17.8 billion in global spending by 2026, making it one of the world's fastest-growing industries. Two small-cap stocks, Intellicheck (IDN 1.62%) and Mitek Systems (MITK 0.37%), are riding this identity solutions wave and could be strong investments over the next decade. Here's why. 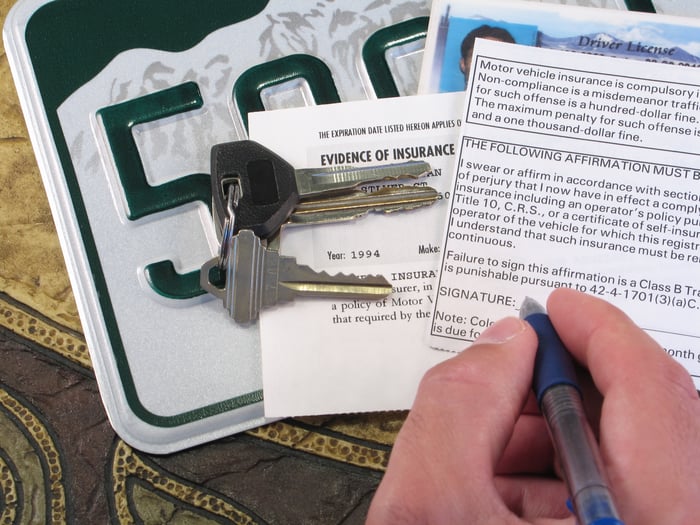 Intellicheck went public over 20 years ago, but after a few years turned into a broken IPO. Shares are still down over 90% from when they first started trading. The company has a long-running relationship with the American Association of Motor Vehicle Administrators (AAMVA), which runs all the departments of motor vehicles in Canada, the United States, and Mexico, to verify new driver's license types are legitimate and follow the proper format before being distributed. This relationship gives Intellicheck an advantage over competitors because it can truly authenticate an ID card, with a 99.9% success rate. Other companies without this exclusive AAMVA relationship are forced to make educated guesses based on historical data, bringing their success rates down.

With the AAMVA data, Intellicheck built a software solution that it sells to all types of retailers that are at risk of accepting fake or stolen identities. When a customer signs up for a membership program or is making a big purchase with a retailer, the cashier scans the customer's driver's license, and then Intellicheck routes the relevant information to its database to determine whether the ID is fake or stolen. This is a huge value added to retailers that are at risk of getting duped by fraudulent purchases, especially for expensive items like cars or jewelry.

The problem is, while Intellicheck has arguably the best identity solution, it has historically been atrocious at marketing and managing the product. This all changed when CEO Bryan Lewis joined the company around three years ago. Lewis started marketing Intellicheck's software through major financial institutions that would then pitch the fraud detection product to the companies that bank with them (financial institutions are typically the ones on the hook when fraudulent activity occurs, so they have a major incentive to stop it from happening).

This marketing switch has led trailing-12-month revenue to grow from only $4 million in the second quarter of 2018 to $10.5 million at the end of last quarter. Intellicheck also has a best-in-class gross margin that consistently sits above 90%. It is not yet profitable as it is spending lots of money to build out its salesforce. Last quarter it hired three additional salespeople, bringing the total on staff to nine. This sales team is landing large clients. On the conference call last quarter, Lewis said the team was beginning to roll out its software to the "largest home improvement retailer in the United States." Though it didn't identify the company by name, it appears Home Depot is now using Intellicheck's software in its stores.

At a market cap of $143 million, Intellicheck trades at a trailing price-to-sales ratio of 13.6 and does not yet have an earnings multiple since it isn't profitable. While expensive relative to its historical financials, if you are going to invest in Intellicheck, you're betting that the company can continue growing sales at a high rate over the next few years as it tries to win new customers in the identity solutions market.

While Intellicheck is mainly focused on in-person transactions and verifications, Mitek Systems focuses on stopping identity fraud online. Its legacy business is powering mobile check deposits for banks. This is a fairly stagnant market, as checks have become less popular forms of payment over the last decade. However, due to the increasing adoption of mobile deposits among people who still use checks and Mitek's pricing power with banks, mobile deposits grew revenue 16% last quarter to $17.2 million.

Mobile deposits are a steady but low-growth business for Mitek, but its digital identity products are where it should get the most growth over the next few years. Last quarter, this segment, which helps businesses confirm identities on online platforms, grew revenue 35% year over year to $11.6 million. Mitek's customers for digital identity include fast-growing platforms like Airbnb, Instacart, and DocuSign. It doesn't have as high a success rate as Intellicheck, which potentially could pose a threat to Mitek if it starts meaningfully growing its online solution, but the lock-in it has with these large digital platforms should give Mitek steady growth over the next few years and beyond.

Mitek's market cap is currently around $720 million. It has a high gross margin like Intellicheck, but is actually profitable and trades at a reasonable multiple of 23 times its trailing-12-month operating cash flow. There are some risks to part of the business with the decline in check usage and the fact it may have gotten a one-time boost for online verification in 2020 due to the side effects of pandemic lockdowns. But if you believe businesses are going to spend more money fighting online fraud, Mitek Systems is one of the market leaders and trades at a reasonable valuation.