Please ensure Javascript is enabled for purposes of website accessibility
Log In Help Join The Motley Fool
Free Article Join Over 1 Million Premium Members And Get More In-Depth Stock Guidance and Research
By Jeremy Bowman - Jun 6, 2021 at 6:05AM

There are signs the company could smash its guidance in its upcoming earnings report.

Stitch Fix's (SFIX 2.22%) earnings report is always a good one to watch.

The stock has been highly contentious since its 2017 IPO, and it almost always moves by double digits on its earnings reports. It's a popular short seller target, with 22% of its float sold short, but others believe the online styling service has disruptive potential thanks to its unique approach to selling clothes, using data science and algorithms to help curate its selections.

The company will report earnings tomorrow after market hours. Analysts are expecting revenue to jump 37.3% to $510.5 million, as it laps the lockdown-affected performance of a year ago, and sees a per-share loss of $0.27, slightly better than the $0.33 loss from the quarter a year ago.

Let's take a look at three questions investors should be asking ahead of the report. 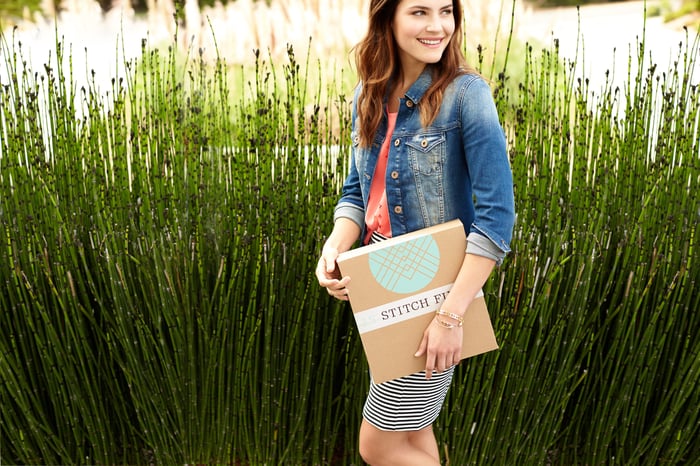 1. Can it top revenue guidance?

In its last earnings report in March, Stitch Fix stock plunged 28% as revenue of $504.6 million came up short of its guidance at $506 million to $515 million. The company blamed the shortfall on shipping delays from pandemic-related constraints and the boom in e-commerce, but that excuse was not enough to satisfy investors as the stock came into the report with high expectations.

This time around, it's key that Stitch Fix not miss the mark twice in a row. For its fiscal third quarter, which runs from February to April, the company forecast revenue of $505 million to $515 million, representing 36% to 39% growth, and an adjusted EBITDA loss of $5 million to $9 million.

Stitch Fix's guidance seems conservative, calling for only slight sequential growth from the second quarter. That seems odd considering that the third quarter is seasonally stronger than the second quarter, as warmer spring weather drives spending and the company doesn't benefit from the holiday season the way most clothing retailers do. That guidance also came out before President Biden approved the $1.9 trillion relief package that included $1,400 stimulus checks for most Americans. Those stimulus checks have fueled spending across the apparel industry , and likely did the same for Stitch Fix.

Additionally, the company likely gained from the economic reopening -- clothing sales rose with increasing vaccinations as Americans prepare to return to work and social events. Peers like Revolve Group reported a boom in sales in March and April for just this reason.

All of those factors offer reasons to believe that Stitch Fix would beat its own guidance in the third quarter, but the company's model differs from those of direct sellers, so it may not have gotten the same tailwinds that companies like Revolve did.

2. Is the direct buy expansion on track?

Regardless of what happens in the third quarter or even with the company's guidance in the fourth quarter, the biggest thing to watch with Stitch Fix is the direct buy rollout, which is scheduled to expand to new clients at the end of July.

Stitch Fix surprised investors in April with news that Elizabeth Spaulding will take over as CEO from Katrina Lake on Aug. 1, which seems largely for Spaulding to make a pivotal shift in the business.

By opening the direct buy platform to new clients, Stitch Fix is fundamentally changing its business model from a company that selects and ships clothing to clients to one that uses its algorithms to curate an assortment of clothing for new and existing customers that they then choose themselves. Stitch Fix is essentially taking the training wheels off its data science-backed model, and the move will significantly expand the company's addressable market. If direct buy takes off with new customers, it could be a huge driver of the company's growth.

3. How is the reopening affecting the business?

Stitch Fix management has said several times that the pandemic presented an opportunity for the company to gain market share, and that it would benefit from the economic reopening thanks to secular tailwinds across the apparel industry.

According to the Census Bureau, sales at clothing stores jumped from $16.6 billion in February to $24 billion in March, a bullish sign for Stitch Fix. On the last earnings call, Lake said: "As the country begins to reopen and the broader environment normalizes, we believe overall demand for apparel will increase and will be incredibly well positioned to win."

While its third-quarter performance will be key to watch, its fourth-quarter guidance will also be telling. The company's full-year guidance currently calls for only a modest sequential growth in the fourth quarter. If the company is benefiting from the reopening, investors should expect a bump in full-year guidance.

The next few quarters will be crucial for Stitch Fix's long-term trajectory. The company needs to capitalize on the economic reopening the way the rest of the apparel industry is, and the opening of direct buy to new clients will also be the biggest test yet of its data science model.

After years of being a battleground stock, Stitch Fix's fate could be determined by the end of the year.