Please ensure Javascript is enabled for purposes of website accessibility
Log In Help Join The Motley Fool
Free Article Join Over 1 Million Premium Members And Get More In-Depth Stock Guidance and Research
By Billy Duberstein - Jun 6, 2021 at 11:30AM

Shares of AMC Entertainment (AMC -0.37%) skyrocketed 160.4% in May, according to data from S&P Global Market Intelligence. The largest movie theater company in the world became the latest poster child of meme stock mania, as Reddit message board WallStreetBets fueled a massive spike in this beaten-down, highly shorted stock as the economy inched closer to a full reopening.

The massive move came in spite of a first quarter earnings report showing a huge cash burn of $325 million, more dilutive equity sales to keep itself afloat, and the company's largest shareholder for the past nine years selling its entire stake.

With all of that going on, you might have expected the stock to go down. But of course, this is 2021, the year of the meme stock! So what the heck is going on? 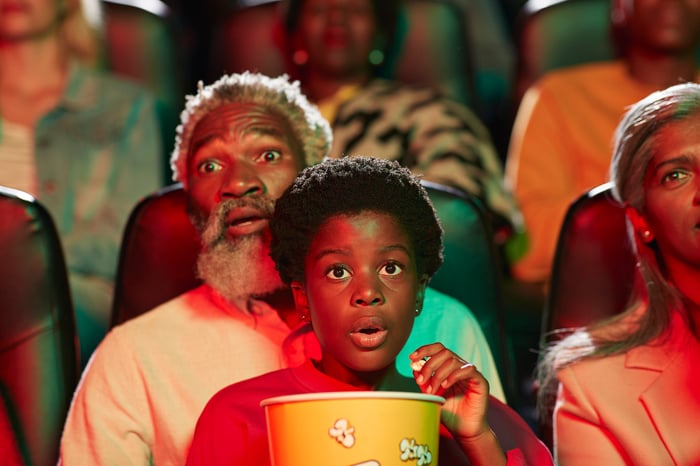 While AMC did report substantial first quarter cash burn at the beginning of the month, its U.S. theaters were only operating at 15% to 60% capacity in the March quarter, and only 27% of international theaters were open, also at limited capacity. With vaccinations accelerating faster than thought since March, reopening optimism apparently reignited the WallStreetBets message board on Reddit, because AMC's stock began appreciating shortly after earnings.

On May 13, a few days after earnings, AMC sold another 43 million shares for $428 million, at nearly $10 per share. Given that the company had sold shares in the low-single digits last fall and winter, selling shares at $10 may have seemed like a great deal... if only management knew what was coming!

In the wake of the equity raise, sell-side analysts at B. Riley upgraded the stock, saying the raise likely lessened the need for more capital ahead of an industry recovery. While that bullish call bolstered the stock further, B. Riley only raised its price target from $13 to $16 -- less than half of where shares trade now.

Then, as the stock climbed toward $12, Dalian Wanda, the Chinese group that had originally purchased AMC in 2012, sold all of its remaining shares on May 21. While most would take that as a hugely bearish sign, the stock inexplicably went on an enormous tear immediately thereafter, more than doubling to $26 per share by the end of the month.

Why did that happen? It's hard to say. On May 26, sell-side firm CFRA upgraded AMC, but only from "Sell" to "Neutral" and giving an $18 price target. That coincided with the hashtag "#AMCSTRONG" trending on Twitter. The stock rallied about 20% that day, and continued to rise through the end of the month. A short squeeze likely played into things, as nearly 20% of shares outstanding were sold short heading into May.

The stock's rise has continued into June, along with more capital raises. On June 1, the company raised $230.5 million at $27.12 per share from hedge fund Murdick Capital. The stock surged 20% on the news, and Murdick sold all of its stake that same day, telling clients shares were "massively overvalued," according to Bloomberg.

Murdick had also owned AMC's debt, likely at distressed prices, so the equity raise may have been a ploy to increase the value of its debt by increasing AMC's creditworthiness. Although a savvy trade by Murdick, it apparently sold too early as well, as AMC's shares skyrocketed over 100% the next day, reaching a high of $72.62, and prompting trading halts. Incredibly, AMC was allowed to sell another 11.5 million more shares to the public the following day at $50.85 per share, raising a whopping $587.4 million while only minimally diluting shareholders. Shares ended last week at $47.91.

All in all, AMC has raised $1.246 billion this quarter, adding to the $813.1 million in cash it had at the end of the first quarter. The company is still likely burning through cash, so it likely has a little less than $2 billion in cash against a still-high $5.46 billion in debt -- and some of that at very high interest rates. The company's share count has also nearly quintupled from pre-pandemic levels to 502 million shares outstanding.

Ironically, with investors bidding up the stock and the company selling shares, likely well above intrinsic value, AMC has likely fended off bankruptcy for the foreseeable future and actually increased the intrinsic value of the company. For instance, if a company is really worth $1, but is able to sell shares at $10, let's say, doubling its share count, it increases the company's intrinsic value from $1 to $6 ($1 plus $5 per share in cash).

The problem? It's still worth $6 -- less than the $10 price at which investors bought shares. Ironically, the more shares the company sells above intrinsic value, the closer intrinsic value will move toward the sale price, but it will never exceed that value.

The big exception to that rule is if the company can use that cash to make high-return investments that will increase intrinsic value going forward. That is also possible, as CEO Adam Aron said on the Murdick capital announcement that "it was time for AMC to go on offense again," saying AMC is pursuing the high-end deluxe theater chain Arclight Cinemas in California, which went bankrupt this year as a result of the pandemic, as well as other "highly attractive theater opportunities."

So if AMC sold shares at high prices, and can then buy high-quality theaters at bargain prices, and if movie-going bounces back in a big way, it could in fact create value above where the company sold shares.

However, that still seems like a long shot. In 2019, before the pandemic, AMC reported "adjusted" free cash flow of $358 million -- and that figure incorporated some generous adjustments. Still, assuming AMC can get back to its prior free cash flow on the new quintupled share count, that's only about $0.71 per share. So, at the current stock price, shares are valued at 67.5 times 2019 adjusted free cash flow per share.

Of course, movie theaters weren't exactly a growth industry prior to COVID, and could very well struggle to fully bounce back. Studios are shortening the window for theater exclusivity, and some may even begin releasing titles directly to streaming services in conjunction with theater releases.

While accretive theater acquisitions could add value, I doubt any acquisitions would materially increase AMC's free cash flow, since AMC already has massive scale as the largest theater chain in the world.

Basically, shares seem massively overvalued from a fundamental point of view, and the stock is extremely risky at these levels. That doesn't mean investors can't make money on technical buying bursts like we've seen over the past month, but that's not really investing; it's subscribing to the greater fool theory.

Billy Duberstein has the following options: short January 2022 $3 puts on AMC Entertainment Holdings. His clients may own shares of the companies mentioned. The Motley Fool owns shares of and recommends Twitter. The Motley Fool has a disclosure policy.