The videoconferencing giant looks even more attractive after its latest earnings report.

Investors were worried heading into its first-quarter earnings report that Zoom (ZM -6.24%) might have some bad news to announce. While its platform was among the biggest winners from pandemic changes to working habits, a slowdown seems inevitable now that the COVID-19 threat is waning in key markets like the United States.

But this week, the video communications specialist showed that it isn't done growing at triple-digit year-over-year rates. Let's look at a few key highlights from that report. 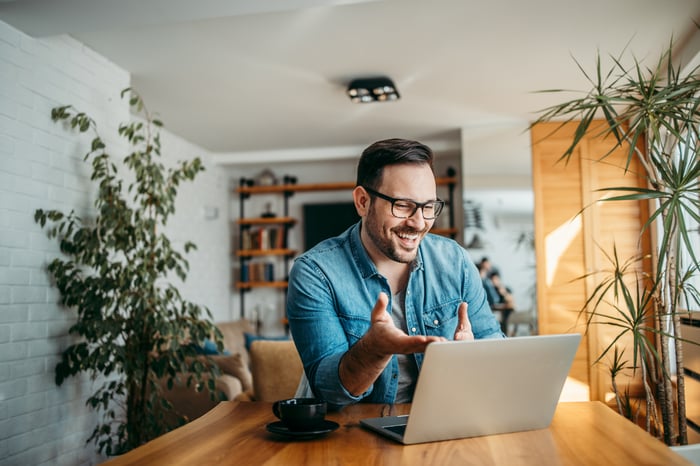 Zoom quickly became a household word during the pandemic as social distancing drove millions of new users to its platform as a substitute for all types of in-person meetings. Growth remained strong as that demand slowed in early 2021, with sales rising 191% to $956 million. Most investors had been expecting closer to $900 million of revenue.

The key factor driving that spike appears to be enterprises, especially those with huge tech budgets. Zoom's pool of small business accounts rose 87% in Q1, but its penetration with big clients was even more impressive. It counted roughly 2,000 customers with contracts above $100,000 per year -- up 160%. "Our commitment to empowering customers to work and learn from anywhere," CEO Eric Yuan said in a press release, "continued to drive our results."

Zoom spent more cash across several expense categories, including tech development, marketing, and salaries. But the business's finances still sparkled in Q1. Operating income soared to $229 million from $29 million a year ago. That result translates into 24% profitability, compared with 9% at this time a year ago.

Investors can reasonably expect that margin figure to grow over time as Zoom's installed base grows. But, for now, management is prioritizing investments in the business that will help it consolidate its latest market share wins. "We are energized to help lead the evolution to hybrid work," Yuan said.

Zoom executives apparently like what they're seeing so far in the fiscal second quarter, which they say will show nearly $1 billion of quarterly sales. That's why the new fiscal year outlook calls for $4 billion of revenue, marking a big upgrade from the $3.8 billion the company had predicted in early March. At that time, Yuan and his team said Zoom was well positioned for strong growth even after boosting 2021 sales by over 300%.

The outlook has only brightened since then. Zoom now has a good shot at crossing the $4 billion mark, compared to $2.7 billion last year and $623 million in the year preceding the pandemic. Sure, the stock has surged in response to that dramatically improved growth outlook.

But Zoom continues to earn its premium with solid operating and financial results like the ones it just reported. And its expanding foothold in large enterprises gives it flexibility to boost its portfolio of services over time. Rather than crashing back down, its sales look primed to keep growing even as working habits shift away from the remote focus that characterized the past year.