The liquefied natural gas company got a big vote of confidence from an analyst.

Shares of NextDecade (NEXT 8.72%) surged more than 34% by 2:30 p.m. EDT on Monday. Fueling the liquefied natural gas (LNG) stock was an analyst upgrade.

Morgan Stanley upgraded its rating on NextDecade from "equal weight" to "overweight," and boosted its price target from $2 per share to $6 per share. That new target is still more than 80% above the current price even after Monday's rally. Underpinning that upgrade is the view that a global recovery in the natural gas market is "well underway." 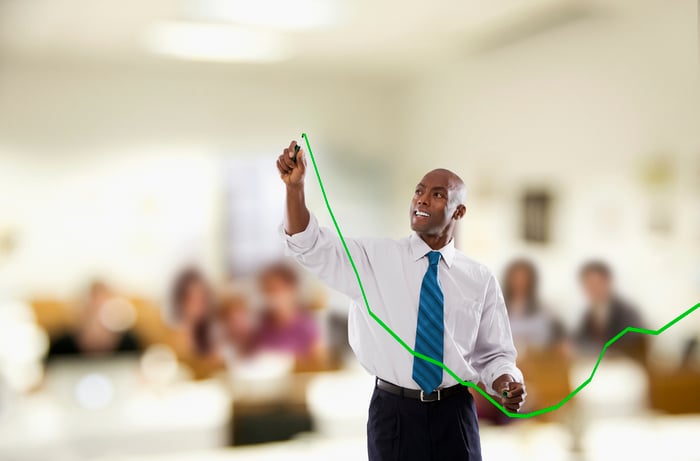 Morgan Stanley believes NextDecade stands out in its field because its carbon-capture venture will enable it to produce low-carbon LNG, which should boost its prospects of reaching a final investment decision on its proposed Rio Grande LNG facility. Further, the company should benefit from higher natural gas prices and an expected capacity shortfall in the coming years.

Those improving market conditions also led Morgan Stanley to upgrade shares of rival Tellurium (TELL 2.22%) from "underweight" to "equal weight" while boosting that stock's price target from $2 per share to $8, nearly 90% above its current level. Tellurium's Driftwood LNG project is also on the path to achieving a final investment decision after securing large LNG purchase agreements.

Energy demand is recovering from the drop-off it experienced earlier in the pandemic. That's making it increasingly likely that NextDecade will be able to move forward with its long-awaited Rio Grande LNG project. That has the potential of generating a significant amount of cash flow for investors. If the company can move forward with that needle-moving project, its stock should have lots of upside.

Why NextDecade Stock Tanked as Much as 15% Today