Please ensure Javascript is enabled for purposes of website accessibility
Log In Help Join The Motley Fool
Free Article Join Over 1 Million Premium Members And Get More In-Depth Stock Guidance and Research
By Courtney Carlsen - Updated Jun 8, 2021 at 11:05AM

The two financial services firms have made huge acquisitions in recent years to diversify income and weather any environment.

These two financial services giants have a lot in common. Both firms have made big acquisitions in the past year that have grown their investment and wealth advisory businesses, adding clients at a rapid pace. And they both purchased trading platforms to make their businesses recession-resistant. With so many similarities between the two, which one should you buy? 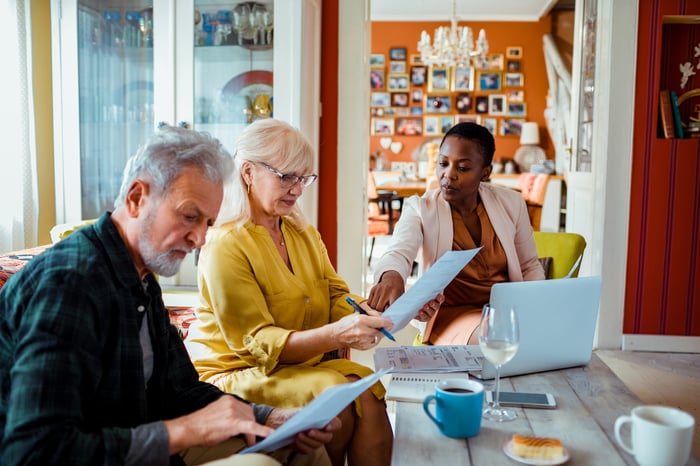 Morgan Stanley made a splash in January 2020 when it announced it would acquire E*Trade for $13 billion. The move helped it fill some gaps and offer complementary services to clients through its electronic trading platform. Not only that, but in times of high volatility -- like we saw last year -- trading platforms benefit from increased trading activity, which in turn drives transaction revenue higher. At the time, CEO James Gorman said the E*Trade acquisition "provides more balance to our business model. It's more wealth management revenue, it's more stability, it's less volatile than the core markets business."

In the first quarter, these acquisitions helped Morgan Stanley post record profits, with revenue up 61%, driven largely by growth in its investment management and wealth management segments, which saw revenue from these segments grow 90% and 47%, respectively. Despite these acquisitions, Morgan Stanley is trading at a relatively cheap multiple, with a price-to-earnings (P/E) ratio of 12.3 and price-to-tangible-book-value (P/TBV) of 2.4.

Charles Schwab was the first of the two to acquire a discount brokerage when it announced it was buying TD Ameritrade in November 2019 to the tune of $22 million. This acquisition gave it a trading platform that grew its technology offerings while expanding its customer base, and Charles Schwab CFO Peter Crawford said the acquisition make the company more resilient for a variety of market environments. The company also acquired USAA's investment management company two years ago.

Charles Schwab also posted record profits in the first quarter, with revenue up 80% from the year before, to $4.7 billion, which helped diluted EPS grow 26%. This growth was driven by increased trading revenue from its TD Ameritrade acquisition. Trading revenue was up $1 billion from the year before -- representing a growth in this revenue of 547% from last year. The company also saw increased revenues from net interest and asset management thanks to a larger client base giving.

Charles Schwab has long held a competitive advantage over peers with its high profit margins, which have hovered in the 30% to 40% range over the past 10 years and has traded at a richer price tag than Morgan Stanley for this reason. As of Friday, the firm traded at a P/E ratio of 33.6 and P/TBV of 6.2, making it nearly three times as expensive as Morgan Stanley.

Morgan Stanley and Charles Schwab are both great stocks to own. Both have done an excellent job of diversifying revenue sources from investment management to wealth management, advisory, and transactions-based revenue on their trading platforms to better weather different market environments.

Choosing between the two, I would go with Morgan Stanley primarily based on valuation. Morgan Stanley has done a solid job of diversifying its revenue sources that match Charles Schwab, but despite its progress it still trades at a steep discount compared to the competitor. While I think both stocks will continue to excel, Morgan Stanley gets the nod from me.