Please ensure Javascript is enabled for purposes of website accessibility
Log In Help Join The Motley Fool
Free Article Join Over 1 Million Premium Members And Get More In-Depth Stock Guidance and Research
By Zhiyuan Sun - Jun 8, 2021 at 6:15AM

Failure is not an option for this small-cap biotech developing a COVID-19 treatment.

The U.S. Food and Drug Administration (FDA) has historically refrained from providing confidential information regarding unapproved products to protect the trade secrets of drug developers. However, the agency made a stunning exception last month with the issuance of a statement regarding CytoDyn's (CYDY -5.13%) leronlimab, which is currently being evaluated as a treatment of COVID-19.

This is the company's leading drug candidate, and is also in clinical trials to treat cancer and HIV. Just what exactly is behind the monoclonal antibody that set off the FDA? 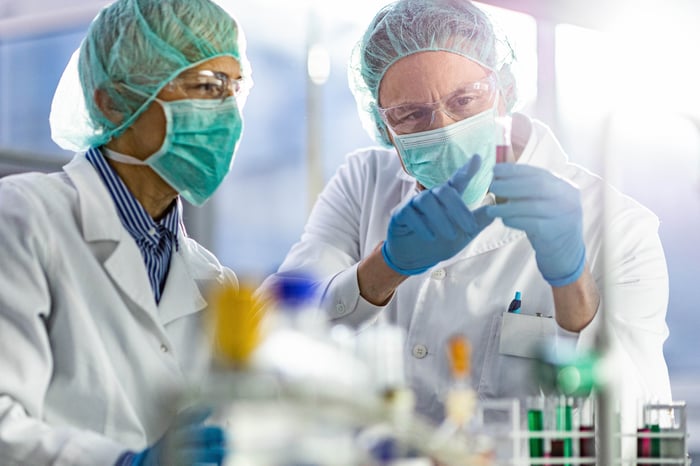 A hard thumbs down

The FDA does not believe there is any data supporting the use of leronlimab to treat COVID-19. In the first of two clinical studies (CD10), leronlimab did not meet the primary endpoint of reliving fever, muscle aches, shortness of breath, and cough associated with mild to moderate viral disease compared to placebo. In addition, the study did not meet any of the secondary endpoints such as mortality, time to symptom resolution, and time to return to normal activity.

In the second study (CD12), leronlimab did not improve survival rates of patients with severe or critical COVID-19 compared to those in the control group. It also did not meet any of the secondary endpoints, such as time to recovery.

Facing rejection, CytoDyn did what all prudent biopharmaceutical companies would do if they were in similar shoes -- ignore the agency completely and move the drug's development and distribution abroad. (That's sarcasm, of course.) The company has experienced quite a degree of success outside the jurisdiction of the FDA.

It is now shipping leronlimab to the Philippines to "help" fight COVID-19 there. The former president of the country, Joseph Estrada, has been taking the biologic after catching the coronavirus in April. He has since recovered.

The drug has attracted a cult following similar to hydroxychloroquine, an alleged cure to COVID-19 as touted by former President Donald Trump. Soon after the trial's failure, people noticed that the estimated half-life of leronlimab was only 10 days. Meanwhile, patients in the CD12 study only received two doses of leronlimab in the first week, while the investigators tallied up the endpoints after 28 days. Hence, bullish investors allege that the study design is responsible for the drug's failure, not the drug itself.

The most obvious flaw in the seemingly impeccable argument is that patients were followed up every week during the 28-day period. If there was any survival benefit compared to placebo by day 14, then it would have caught the attention of the FDA. But there wasn't.

With that option off the table, CytoDyn now claims a small subset of patients in the CD12 study developed a substantial survival benefit after receiving the drug. The efficacy was as high as 82% in the subgroup and was statistically significant.

The whole ordeal comes from a misunderstanding of statistical averages. In the 394-patient study, the mortality rate of those receiving leronlimab was 20.5% and 21.6% for placebo. If leronlimab reduced the risk of death by 82% in a subgroup of 62 patients, then it must have done considerably worse than placebo in another for the overall mortality rates to be roughly equivalent. Interestingly enough, the company has not released any analysis for that subgroup.

CytoDyn's CEO Nader Pourhassan does not find criticism very amusing. Pourhassan has been regularly on air, accusing media outlets that criticize the drug of engaging in "false reporting." In addition, Pourhassan regularly promotes the "benefits" of leronlimab for treating COVID-19 on platforms like YouTube and during company earnings calls.

Can this end well?

The most perplexing element about all this is that leronlimab has a good chance of regulatory approval to treat its other indication, HIV. In clinical studies, 81% of patients with HIV saw their viral load, as measured by the number of HIV RNA copies per milliliter (mL) in their blood sample, fall below 50. Although not directly comparable, 92% of HIV patients treated with Gilead Sciences' (GILD 0.82%) blockbuster drug Biktarvy saw their HIV RNA copies fall below 50/mL. So there's definitely promise there.

Unfortunately, it's safe to say that the company hurt its relationship with the FDA over its recent COVID-19 drug fiasco. The ethics of what CytoDyn is trying to do are also very suspect. All of this causes a great deal of uncertainty for leronlimab, not to mention potential legal repercussions. A good rule of thumb is to never invest in a company, especially in a biotech, that you can't trust. I don't think that could be any more applicable here.