This would-be uranium miner rose along with its broader industry peers, but that doesn't mean nothing happened in May.

Shares of Denison Mines (DNN 6.89%) advanced roughly 14% in May according to data from S&P Global Market Intelligence. That, however, wasn't out of line with the performance of its peers, which were up about the same amount. But Denison isn't exactly comparable to most of its uranium mining peers because its biggest asset isn't an operating mine but a mine development called the Wheeler Project.

Uranium prices have been relatively strong since January 2020, and they increased in May. So there was a clear tailwind for uranium companies last month that likely played a big role in Denison's price increase. However, the sector has been receiving increasing interest of late because nuclear power plants don't emit carbon, making them a source of clean energy (despite the negative image of nuclear power). Uranium miners have actually been building stockpiles of the fuel as investments, with plans to sell it later on the belief that prices will rise. That belief is driven by the fact that low uranium prices in recent years have stymied mine development plans even as new power plants are set to come on line, largely in Asia. 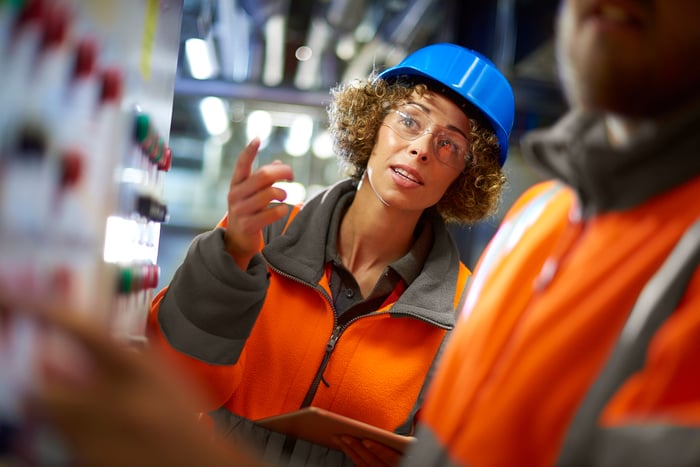 The problem here is that the logic underpinning the stockpiling effort is that it is cheaper to buy uranium than mine it. That isn't exactly a great backdrop for a company that is building a uranium mine. That said, Denison is getting in on the arbitrage and buying its own stockpile. That's been funded by stock sales, taking advantage of Denison's stock gain of over 90% through the first five months of 2021. But there's more to that story, too, since the company also managed to fund its environmental assessment and feasibility study for the Wheeler Project and its 2021 and 2022 exploration programs. In other words, Denison's stock sales appear to have set it up fairly well for the next couple of years of development efforts and then some (noting the uranium stockpile). This list of positives was the lead in the company's first-quarter earnings release in early May.

Denison Mines is not an appropriate stock for most investors, given that building a mine is a long, complex, and expensive process. More aggressive types, however, should find the pre-funding of development costs achieved so far in 2021 very interesting. Notably, uranium production won't start until at least 2024 (assuming limited delays from the work stoppage caused by the coronavirus pandemic) and might actually get pushed out further (if delays end up being material). Which means that production could be coming online just as uranium demand is picking up, if current industry projections pan out as expected. So the company using the market interest in uranium stocks today to its advantage to reduce near-term funding risks is actually kind of exciting and, perhaps, justifies investors' enthusiasm here. Denison just needs everything to go smoothly on the Wheeler Project if it hopes to live up to the positive being priced into the stock right now.

Is Denison Mines Stock a Buy?