It's not just about GameStop and AMC anymore.

So-called meme stocks like GameStop and AMC Entertainment Holdings have been in the spotlight for quite a while, with huge gains in January having put them on the map and a recent revival once again raising awareness of the stocks. And some new names are getting added to the list of stocks that retail investors are paying close attention to. Today, GEO Group (GEO -0.29%) and Clean Energy Fuels (CLNE 7.00%) saw their shares soar as they came into the spotlight. Below, we'll look more at their businesses and what's behind the moves.

GEO gets a big bounce

Shares of GEO Group were up more than 55% on Wednesday afternoon. The private prison operator has found itself in a broad decline for years now, but today's bump up came as investors looked at sizable short interest in the company's shares.

GEO Group's long-term drop stemmed from the growing sentiment against private prison operators. In particular, changing attitudes in Washington led the Justice Department to stop using the services, and many states have considered similar measures for their own prison populations. Moreover, with unique exposure to issues related to the pandemic, GEO Group has raised some risk-management concerns among some investors.

However, GEO Group actually saw its bottom line perk up in its most recent quarter. The company is also considering some major strategic decisions, including potentially giving up its status as a real estate investment trust (REIT) in order to give it more flexibility with respect to capital allocation. REITs are required to distribute nearly all of their profits in order to retain favorable tax status, which limits their ability to reinvest in their own businesses without raising capital.

With short interest making up roughly a third of shares outstanding as of mid-May, according to Yahoo! Finance, GEO Group meets the qualifications for a potential short squeeze. That's been the strategy for identifying meme stocks, and it'll be interesting to see if GEO catches on as well as GameStop and others have. 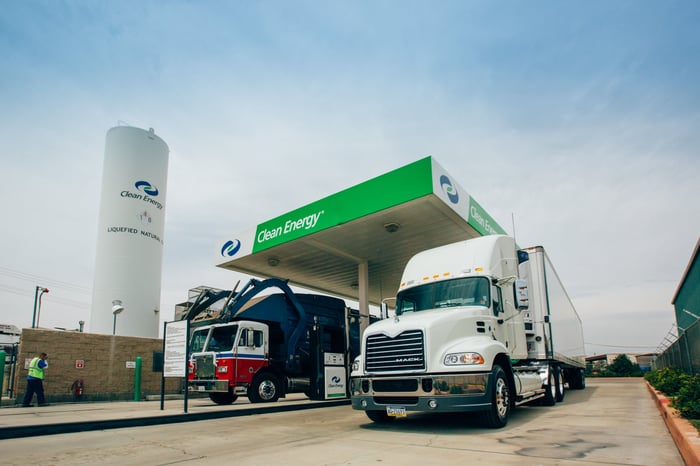 Elsewhere, shares of Clean Energy Fuels were up 27%. The natural-gas fueling network provider has been stuck in the doldrums for years, but recent gains have investors looking more closely at the company once again.

Institutional investors have been skeptical of Clean Energy Fuels' long-term strategy, but not for the reasons you might expect. The company has actually done a reasonably good job of bringing on customers, with the high-profile signing of an agreement with Amazon (AMZN -0.99%) perhaps the biggest deal for the small supplier of natural-gas fueling stations.

The problem, though, is that Clean Energy has had to make big concessions to sign deals. For instance, the Amazon agreement gave the e-commerce giant huge numbers of options to purchase shares. That would seem to cap potential future gains, because if Amazon exercises its options, the resulting new shares would dilute existing shareholders.

Clean Energy Fuels is in a promising business. If it can do better on the execution front and land more deals with better terms, then it could justify gains like this in the long run.