Please ensure Javascript is enabled for purposes of website accessibility
Log In Help Join The Motley Fool
Free Article Join Over 1 Million Premium Members And Get More In-Depth Stock Guidance and Research
By Daniel Sparks - Jun 9, 2021 at 8:35AM

Here are some of the most important features Apple announced -- and when they're set to be released.

Despite the Street's high expectations for Apple (AAPL 0.88%) going into its important annual Worldwide Developers Conference on Monday, the tech giant seems to have delivered -- at least based on the fact that shares not only didn't take a hit following the event but have actually risen slightly.

As investors continue to digest all of the announcements the tech company made, here's a look at three key announcements from the event. 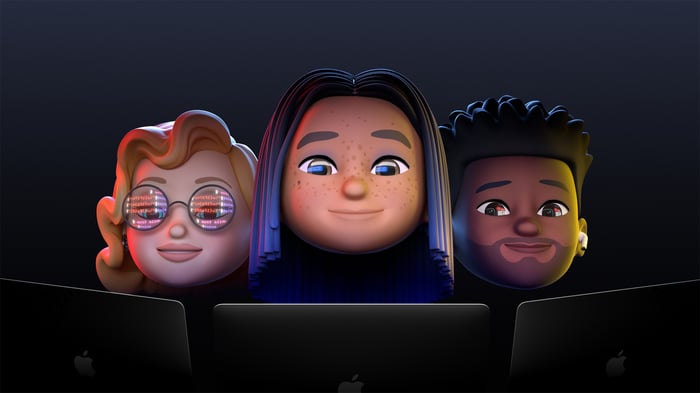 As expected, Apple revealed its latest version of iOS -- its iPhone operating system. iOS 15 featured a number of major updates, including an improved FaceTime, a new Focus feature, enhanced Maps, and more.

FaceTime was a major focus during the event, with new features aimed to make the experience feel more natural. For instance, FaceTime uses spatial audio to make the sound seem as if it's coming from wherever a person is positioned on a screen. Furthermore, a new microphone mode helps isolate the user's voice from any background noise. In addition, a new grid view in Group FaceTime lets users see more faces while chatting in a group. But perhaps one of the most interesting announcements about FaceTime was that it now works on Web browsers on Android and Windows devices, letting anyone join a FaceTime call.

A new Focus feature helps users customize notifications and apps based on what they want to focus on.

The updated iOS experience, which will be available for free as a software update this fall, will help Apple build on its momentum in iPhone. The important product segment saw revenue increase 66% year over year in Apple's most recent quarter, driven by strong customer reception of Apple's newest iPhone models.

One FaceTime feature is worth its own bullet point, enabling all sorts of new creative ways to collaborate, communicate, and share: SharePlay. The feature lets users stay connected on FaceTime while listening to songs, streaming movies, or viewing apps together. The feature works with iPhone iPad, Mac, and even Apple TV.

SharePlay will make its debut on iOS 15 later this fall.

Finally, it's worth pointing out what sadly didn't make it to the event -- Apple's rumored new 14-inch and 16-inch MacBook Pros. The new computers, whenever they launch, are expected to have an overhauled design and feature Apple's new in-house designed personal computer processors.

While the ever-active Apple rumor mill is undecided on when these potential new devices might see the light of day, most speculation points to an unveiling at some point later this year.

Apple's Mac business has been on fire, helped by a recently launched smaller MacBook Pro and new MacBook Airs. Mac revenue rose 70% year over year in the company's most recent quarter.

If there's one overarching narrative from Apple's event, it's that the company's ecosystem of hardware, software, and services looks as if it will be made even stronger from these new features.