The Waymo Via system will be put through its paces on the Houston-to-Fort Worth run.

Waymo, the self-driving vehicle unit of Google owner Alphabet (GOOG -1.39%) (GOOGL -1.40%), is accelerating the development of its autonomous truck program. On Thursday, Waymo's Waymo Via trucking division and J.B. Hunt Transport Services (JBHT -1.52%) said in separate announcements that they are teaming up to test limited autonomy in live delivery situations.

The two companies will run a series of human-supervised runs on the I-45 highway between the cities of Houston and Fort Worth in Texas. These will be conducted with J.B. Hunt trucks loaded with Waymo Via's self-driving systems. As we are not currently near 100% autonomous driving, a licensed human driver will be on board the vehicles, in addition to a software engineer. 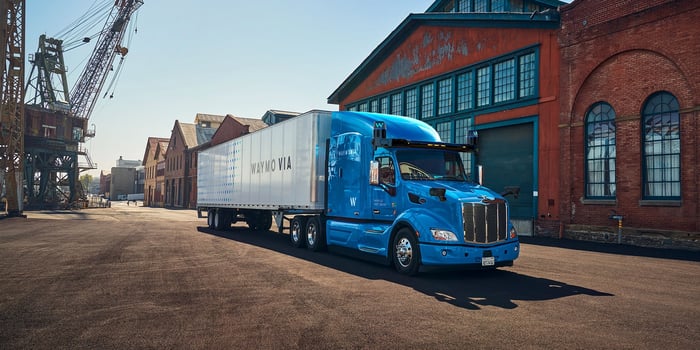 In these trials, the Waymo Via-equipped trucks will harness Level 4 autonomous technology that is to be consistently monitored by Waymo officials. The trucks will be able to self-drive on the highway; presumably the human operator will take over on smaller roads.

In its press release on the arrangement, J.B. Hunt said that it and the Alphabet unit "will be exploring how autonomous driving technology can be integrated across fleets and enhance safety and efficiency." The two companies have previously collaborated on the development of such technology.

Meanwhile, Waymo Via wrote in an official company blog post that this new program should "help us define how we can continue working together long-term to advance the trucking industry through the deployment of autonomous driving technology."

Waymo Via didn't hesitate to mention that it has been hauling freight for clients since 2018.