Please ensure Javascript is enabled for purposes of website accessibility
Log In Help Join The Motley Fool
Free Article Join Over 1 Million Premium Members And Get More In-Depth Stock Guidance and Research
By Zhiyuan Sun - Jun 11, 2021 at 11:14AM

There is more than meets the eye for this energy stock.

On June 8, shares of California-based renewable natural gas (RNG) producer Clean Energy Fuels (CLNE -2.19%) surged by 31.52% in a single day. No fundamental changes led to the surge, but members of the 10 million-strong WallStreetBets trading community began to note the company as a new "meme stock."

Investors are arguably wondering if this will be a one-time pop or if there is momentum building for an even greater rally. Just what is so special about Clean Energy? 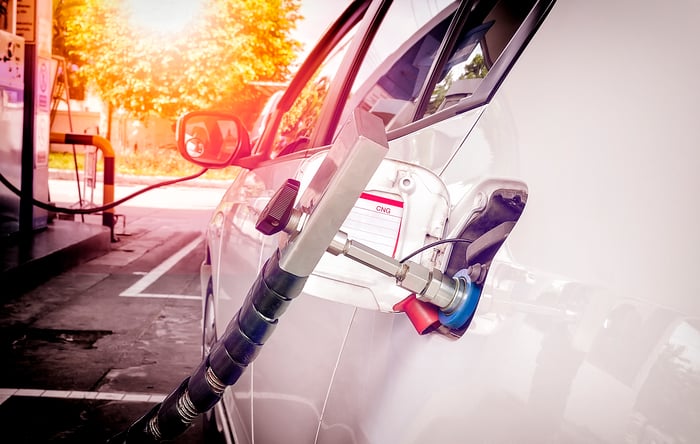 It's easy to see why Clean Energy has "good vibes" with the WSB community. On April 19, the company signed a five-year agreement with Amazon (AMZN 0.80%) to provide RNG at 27 of its existing fueling stations and another 19 once construction finishes. Last month, energy giant Chevron invested an additional $20 million ($28 million total) in the Adopt-a-Port initiative with Clean Energy. The initiative delivers RNG to trucking fleets serving Los Angeles and Long Beach ports to help reduce carbon emissions.

Clean Energy operates 565 stations across the U.S. and Canada. It serves thousands of vehicles, airport shuttles, buses, and trucks in reducing their carbon emissions. Its RNG consists of methane that comes from the breakdown of organic matter at waste treatment plants, farms, landfills, etc. By capturing this gas and refining it rather than letting it leach into the atmosphere or flaring it on-site, RNG makes better use of existing emissions and is considered much more environmentally friendly than using fossil-fuel derived gas.

According to the California Air Resource Board, dairy gas RNG (captured methane emissions from cow waste) is the only fuel source that is carbon-negative when compared to gasoline, diesel, hydrogen, renewable diesel, electric vehicles, and landfill biofuel. Every 100,000 gallons of RNG supplied equates to removing 1,025 cars from the road.

Clean Energy delivers about 92 to 99 million gallons of RNG each quarter, representing a significant portion of the country's total annual production capacity of 500 million gallons. In the first quarter of 2021, its revenue fell by 10.3% year over year to $77.1 million. Simultaneously, the company's net loss increased to $7.2 million compared to a net income of $1.7 million in Q1 2020.

The decline is mostly due to COVID-19 related disruptions in its supply chain. Amazon seems to agree with this assessment as well. RNG deal aside, the e-commerce company also plans to take up to a 20% stake in Clean Energy over the next decade.

Like with all renewable energy, the biggest problem with RNG is its cost. Clean Energy strives to match its RNG prices to regular natural gas and has been somewhat successful. In Q1 2021, fossil-fuel-derived natural gas hovered between $4 and $9.45 per thousand cubic feet. That translates to about $0.33 to $0.79 per gallon. Meanwhile, dividing Clean Energy's fuel revenue by gallon of RNG supplied equates to an average price of $0.74 per gallon.

It's not perfect, but the company is getting there. Furthermore, the company is well aligned with the Biden administration's plans to reduce the country's carbon emissions by 50% compared to 2005 levels over the next decade. As the nation's top producer of RNG, Clean Energy is well-positioned to benefit from the initiative. That's not to mention potential incentives such as energy subsidies.

Clean Energy stock currently trades at nine times sales, which is expensive for an energy company. However, keep in mind that its agreement with Amazon could supply hundreds of millions of gallons of RNG alone. Overall, given its upcoming growth catalysts, high RNG quality, and competitive pricing, it is a solid energy stock to put on your radar.