Please ensure Javascript is enabled for purposes of website accessibility
Log In Help Join The Motley Fool
Free Article Join Over 1 Million Premium Members And Get More In-Depth Stock Guidance and Research
By Manali Bhade - Jun 12, 2021 at 7:31AM

These companies are well-positioned to weather a downturn and safeguard your portfolio from risk.

Since March 2020, the U.S. equity market has witnessed the shortest bear market in history, followed by a ferocious tech-driven rally and then a sharp rotation from growth to value stocks.

Things may now be on the verge of changing again -- and for the worse. In April, the consumer price index (CPI, a metric used to gauge inflation) rose year-over-year by 4.2% , a stark jump from 2.6% year-over-year increase in March . This has left investors and analysts worried that the U.S. Federal Reserve could tighten its monetary policy earlier than expected. While Treasury Secretary Janet Yellen sees this inflation as transitory, increasing labor costs (wage inflation is sticky) and rising commodity prices seem to point to a more persistent inflation trend.

Against this backdrop, another market crash might now seem inevitable. However, you can safeguard your portfolio from dramatic drawdowns even in such an uncertain environment by picking up some fundamentally strong all-weather stocks -- including American Tower (AMT -0.71%), Visa (V 0.34%), and Trulieve Cannabis (TCNNF 2.03%) (TRUL 1.38%). 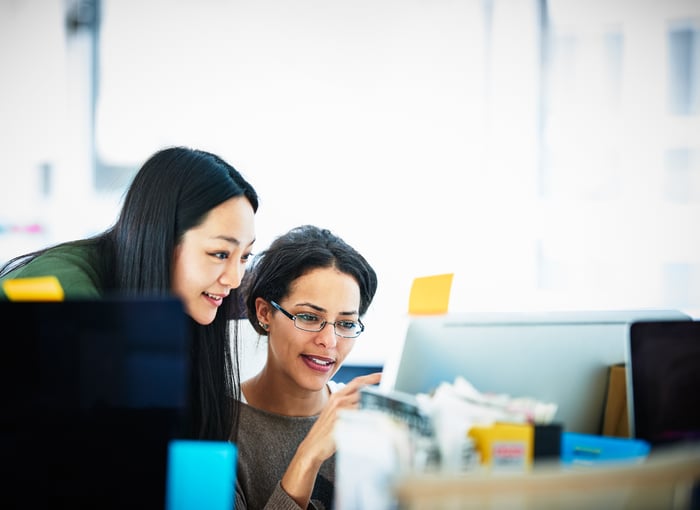 With a broad cell tower footprint, AMT has emerged as a key beneficiary of many recent trends, including increasing wireless mobile phone penetration, rising mobile data usage, and the availability of lower-cost smartphones. All of these are driving carriers to accelerate the pace of 5G network deployments, acquiring mid-band spectrum assets such as 2.5 gigahertz and C-band frequencies to expand coverage of the 5G network in urban and rural locations. American Tower is well-positioned to leverage these structural tailwinds in the long run. The company is investing in several initiatives, including upgrading the capacity of its towers to accommodate more tenants and more equipment for existing tenants, building or acquiring new towers, and power-saving solutions.

In the first quarter (ending March 31), American Tower's revenue rose 8.3% year over year to $2.2 billion, while adjusted funds from operations (AFFO, a profitability metric used in the REIT industry) were up 23.8% year-over-year to $1.1 billion. The company enjoys high-revenue visibility and low top-line volatility, mainly thanks to its long-term contracts with prominent wireless carriers such as AT&T (T 0.05%), Verizon (VZ -2.54%), and T-Mobile (TMUS 0.90%).

Being a REIT, AMT must return at least 90% of its taxable income as dividends. AMT is currently paying a quarterly dividend of $1.24 per share, which translates into a dividend yield of 1.85%. With a trailing-12-month (TTM) dividend payout ratio (based on dividends paid as a percentage of AFFO) of 58.8%, AMT has sufficient financial flexibility to continue increasing its dividend payments in coming quarters.

AMT is trading at a TTM price-to-sales (P/S) multiple of 14.48, which is not cheap -- the average for REITs in the first quarter was 8.32. However, considering that the REIT already enjoys a strong moat in a rapidly expanding market, it could still prove to be an attractive investment for retail investors even at these elevated levels.

Visa expects contactless services such as digital wallets and phone payments to become huge growth drivers in coming years. The company has also added real-time payments platform Visa Direct Payouts and is gradually rolling out infrastructure for multiple types of cryptocurrency transactions. The shift in consumer preferences toward digital experiences is also driving up demand for Visa's value-added services, including secure payment platform Cybersource as well as risk management and authentication offerings.

Thanks to these structural tailwinds, Visa's second-quarter (ending March 31) operational performance has already surpassed pre-pandemic levels in many areas. The company's global payments volume was up 11% year over year and 16% higher than the corresponding quarter in 2019. U.S. payments volume also rose by 18% year-over-year and 24% from 2019.

With a TTM P/S multiple of 22.9, Visa seems quite expensive. However, this is a company well-positioned to enjoy network effects and economies of scale in a recovering economy that is rapidly going digital. Hence, despite the rich valuation, the company offers an attractive risk-reward proposition to retail investors.

Trulieve Cannabis has gained 194% in the past year -- and for good reason. This is one of the very few profitable U.S. multi-state operators (MSOs) in the cannabis space. Trulieve has focused extensively on the medical marijuana market in its home state, Florida. As of May 13, the company operated 82 dispensaries  and had sold its products to 2.5% of the total 500,000 registered patients in Florida. Trulieve is also focusing on building a presence in the medical marijuana markets of California, Connecticut, Pennsylvania, and Massachusetts.

Trulieve's acquisition of Arizona-based Harvest Health & Recreation (HRVSF) in an all-stock deal worth $2.1 billion will further expand the combined company's geographic presence to 11 U.S. states. After deal completion, which is expected in the third quarter, Trulieve will have 126 medical and recreational dispensaries in its portfolio targeting the burgeoning cannabis market in the southeast, west, and northeast U.S. The combined company is expected to report fiscal 2021 revenue of $1.2 billion and adjusted EBITDA of $461 million. The deal is also expected to reduce Trulieve's geographic concentration risk, which has arisen from the company's extensive reliance on the Florida market.

With a TTM P/S of 7.6, Trulieve is cheap compared to other U.S. MSOs such as Curaleaf Holdings (CURLF 3.02%) and Green Thumb Industries (GTBIF 4.87%). Recent history has shown the legal cannabis industry is mostly recession-proof -- meaning Trulieve can survive a market crash. Against a backdrop of solid top-line growth, profitability, and robust growth strategy, this company can prove to be a long-term winner for retail investors.

3 Stocks to Buy During the Coronavirus Pandemic