Please ensure Javascript is enabled for purposes of website accessibility
Log In Help Join The Motley Fool
Free Article Join Over 1 Million Premium Members And Get More In-Depth Stock Guidance and Research
By Jason Hawthorne - Jun 13, 2021 at 5:11AM

It's a recent IPO using artificial intelligence to make better decisions for buyers and lenders. Its stock could see massive gains.

Born in the ashes of the 1837 financial panic, the credit rating system has come a long way. What started as subjective pseudo-detective work about a borrower's character and assets has grown into a multibillion-dollar industry. It still leaves a lot to be desired.

Upstart (UPST 9.62%) is stepping into the void and using artificial intelligence to connect loan demand to its network of banking partners. Using artificial intelligence (AI) to more accurately assess risk, the company is able to facilitate higher approval rates, lower interest rates, and an overall better user experience. It's just getting started but the potential is enormous. 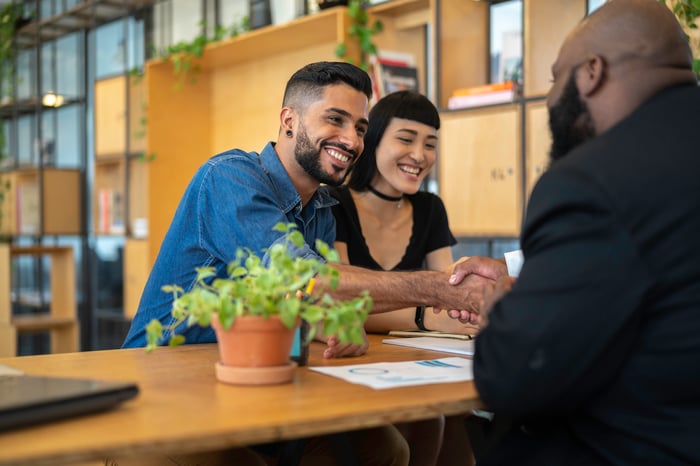 Artificial intelligence is eating the world

In 2011, venture capitalist Marc Andreessen penned an editorial titled "Why Software Is Eating The World." His argument was that the economy was undergoing a dramatic change where technology -- specifically software -- was becoming the force behind many traditional businesses. Looking around today, you could make the same argument for AI.

Upstart's AI model is built with 10.5 million historical repayment events and relies on more than 1,000 variables. Although traditional financial institutions might have more transaction data, they don't have as many variables to use as inputs. Those factors help Upstart determine the likelihood that a borrower will repay, how consistent the payments will be, and even whether they'll repay early.

The company delivers all of this through a simple cloud-based application as a bank-branded loan portal. It can be on a website or mobile. It also allows lenders to customize decisions based on their risk tolerance and specific needs like loan duration, return thresholds, and the borrower's personal financial ratios. It is a much more customized approach than is typically used today. In fact, traditional credit scores are fairly simplistic algorithms that often underapprove and overprice credit.

One benefit of using Upstart's application is the user experience. With an AI-based model contained in a single website or mobile app, much of the waste is eliminated. Last year, about 70% of the loans processed were done instantaneously -- without requiring any phone calls or document uploads. That wasn't happening at all as recently as late 2016.

The most important measures of success are related to the loans. Using Consumer Financial Protection Bureau criteria, the company showed it approved 27% more borrowers than traditional high-quality lending models with 16% lower interest rates. Just like the automated decision process, you would expect those results to improve over time. They say they have. The company has done this by iterating its predictive model with more robust techniques and as more data becomes available. They have been at it for eight years. That's a good head start if others try to copy the approach.

A strategy that scales

Since Upstart earns its revenue through fees, it has scaled efficiently with loan volume. That means as more loans are given, more revenue is generated, and costs don't rise nearly as fast. In 2020, the company finally produced operating profit. The financials show it was only a matter of time. For the first quarter of 2021, the trend continued. Upstart grew year-over-year revenue 90% with an operating margin of 13% -- its highest to date. For the fiscal year, management has guided to 158% top line growth.

So far, the company's application has been used to evaluate relatively small, personal loans. Its customers have been regional banks and credit unions vying to compete with larger financial institutions. It's natural to expand the types of loans supported. CEO Dave Girouard has pointed to auto lending as the next big opportunity. To that end, the company finalized an acquisition of Prodigy in the first quarter. Girouard describes it as Shopify for auto dealers -- a total e-commerce solution to get them online. It will immediately increase the number of dealerships with Upstart's application by 45%.

If AI is eating the world like software did, it will do it one bite at a time. For Upstart, it began with personal loans and is shifting into the $1.4 trillion auto lending market. With a business that is growing rapidly and already producing profit, it's tantalizing to imagine just how large an investment could grow. As with any newly public company, I'll take a small position at first. But as soon as rules allow, Upstart is going to be the next stock I buy.