Please ensure Javascript is enabled for purposes of website accessibility
Log In Help Join The Motley Fool
Free Article Join Over 1 Million Premium Members And Get More In-Depth Stock Guidance and Research
By Billy Duberstein - Jun 15, 2021 at 7:00AM

Dividend investors may have a difficult time finding attractive payouts in more popular growth sectors, such as technology and consumer discretionary stocks. And while utilities tend to payout nice dividends, rising inflation and interest rates would be decidedly bad for utility stock prices.

For dividend stocks that can also benefit from the economic reopening, investors may wish to look to two sectors: financials, and energy. Of the two, energy may present the greatest potential upside, along with the biggest potential dividends.

That's because of three factors: One, oil prices are climbing again, recently touching $70 on the back of improving demand and extreme discipline on the part of OPEC+ and shale operators. Second, the sector has fallen out of favor, having underperformed for the better part of the last decade, so the stocks are still cheap despite strong performance year-to-date. Third, the companies themselves have changed, and are now focused on disciplined production and cash flows, not growth at-all-costs.

Perhaps no oil company reflects this change better than Devon Energy (DVN 0.88%), and its industry-first variable dividend policy, which could pay out a double-digit yield this year at today's oil prices. 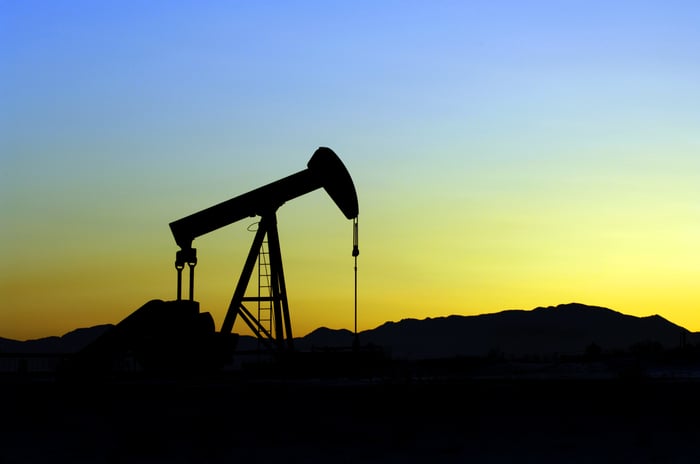 The new, new Devon energy is an example of a changed oil industry

Today, Devon Energy looks vastly different than it did less than a year ago. In January, it closed an all-stock merger of equals with WPX Energy, combining two of the more efficient shale oil producers in the U.S. Devon and WPX had some of the highest well productivity in the industry, and should reap $600 million in merger synergies on top of that.

Increased efficiencies come with a change in philosophy on the part of U.S. oil producers. Under "Shale 3.0+," as Devon's management team calls it, shale players are generally holding oil production growth between zero and 5%, while focusing on free cash flow, de-leveraging, and a new type of fixed-plus-variable dividend structure.

Management believed the combined company oil price breakeven was $33 per barrel at the time of the merger, but on its recent conference call with analysts said it believes it can continue to improve that number. At WTI prices of $60, the combined company could yield substantial free cash flow, with one analyst estimating $3.4 billion in free cash, once all of the merger synergies are realized, and once Devon takes off its oil price hedges.

Devon's market cap is a little less than $20 billion and its enterprise value is around $25 billion right now, so the stock would seem pretty underpriced in that scenario. While unpredictable, WTI prices today are around $70, which could lead to even better numbers than that forecast.

Monster dividends could be on the way

As part of its new fixed-plus dividend structure, Devon has committed to an $0.11 fixed dividend, as long as its balance sheet meets a minimum threshold, which it well exceeds today. Beyond that fixed dividend, the company will pay up to 50% of its excess free cash flow to shareholders. The remainder will go to debt paydown, and once the company hits its leverage targets, management may even begin to buy back stock.

As a result of a good first quarter, the combined dividend was $0.34, which annualizes to about 4.6%. However, oil prices are now higher, so look for the variable dividend to rise in the second quarter and potentially throughout the year. Based on a $60 WTI price, Devon management guided its dividend yield to about 7% this year. But if oil prices remain in the $70 range, its possible Devon could pay out a double-digit dividend yield, all while still retaining enough cash to bolster its balance sheet.

Oil stocks have under-performed for the better part of the last decade, after the shale revolution led to chronic oversupply, and demand waned due to slow economic growth, the rise of electric vehicles, and of course, the pandemic.

However, after an investor revolt against oil stocks, U.S. management teams are now acting with a shareholder mindset, limiting production growth, focusing on profits, and paying out cash to shareholders. Devon is one of the first major U.S. shale producers to implement this fixed-plus-variable payout structure, but it's not the only one, as others have stated their intention to do the same next year.

While the oil industry is fairly risky as ESG concerns sweep the world and OPEC+ largely controls supply for the near-term, this new paradigm is a very welcome sign. If the economy continues to have a strong recovery, Devon and some of its oil stock peers could be some of the best dividend stocks to own in 2021.