Please ensure Javascript is enabled for purposes of website accessibility
Log In Help Join The Motley Fool
Free Article Join Over 1 Million Premium Members And Get More In-Depth Stock Guidance and Research
By James Brumley - Jun 15, 2021 at 8:30AM

Their simple, proven business models equip these stalwart companies to fund their payouts in almost any environment.

Looking for a little more income from your investment portfolio? It may not be a bad idea given the current economic backdrop. While the global economy is coming out of a rough patch caused by the coronavirus contagion, inflation is popping up in a big way in certain areas. And while we don't know what the future holds, it certainly seems as if several growth-first companies have become a bit riskier as investments than they were just a few months back.

With this in mind, here's a rundown of three great all-weather dividend stocks that should be able to push through whatever economic headwind awaits on the horizon. In no particular order... 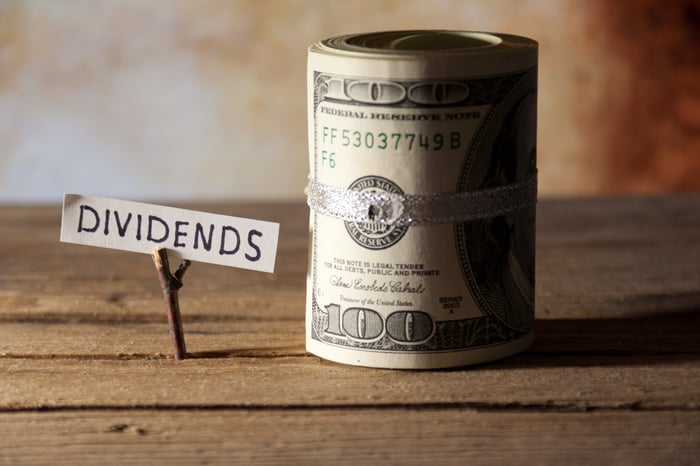 But there's an important detail that's not evident in the yield alone. That's the rate at which the company raises its dividend. Over the course of the past 10 years, JPMorgan's quarterly payout has improved from $0.25 to $0.90 per share, growing at an annualized clip of 13.7%. That's huge.

Be aware that this diversified banking and finance name trimmed its dividend pretty significantly in the wake of the subprime mortgage meltdown, and could certainly do so again should the company find itself in similar circumstances. After all, about half of its revenue is ultimately linked to interest rates.

Even with inflationary pressures rising, however, a recreation of those unusual underpinnings isn't very likely. Then, interest rates were peeling back from above-average highs, sapping loan margins in addition to piling on costs linked to soured loans. Now, conversely, rates are hovering near record lows and poised to rise in a way that actually makes lending more profitable. A recession curbs the demand for loans, but shouldn't outright kill that demand unless economic weakness turns downright cataclysmic. In the meantime, the other half of JPMorgan's business comes from things like asset management, credit cards, investment banking, and even consumer banking. These businesses are pretty resilient even if they don't exactly thrive in a lethargic environment.

Would it surprise you to know that technology company Hewlett Packard Enterprise (HPE 0.41%) is a dividend stock? Well, it is, and a good one too. Sure, you can find higher yields, but they're not easy to find within the tech sector.

This company is, of course, the business and enterprise-facing half of the 2016 split of what used to just be known as Hewlett Packard, with the other consumer-facing half going its separate way. Then in 2017, Hewlett Packard Enterprise spun off its services business to merge it with Computer Sciences Corp., further narrowing its portfolio.

They've been smart moves. A tighter focus on each organization's core customer has ultimately produced greater success than was being achieved as a bigger, broader outfit.

That's not always been easy to see, granted. Revenue and earnings have been just as apt to fall as to rise since the company as we know it today first took shape. The thing is, even after adjusting for one-off, non-operating expenses, Hewlett Packard Enterprise has never really struggled to make its quarterly dividend payment. The current annualized payout of $0.48 per share is only a fraction of the $1.88 (give or take a few cents) per share the company expects to report on a non-GAAP earnings basis for the current fiscal year.

Hewlett Packard Enterprise may not be a major growth machine, but surprisingly enough, it's evolving into a picture of consistent progress as the cloud computing and edge computing markets mature.

Finally, add Coca-Cola (KO 1.26%) to your shortlist of dividend stocks to consider adding to your portfolio.

Like most other consumer-oriented companies, Coca-Cola's been crimped by the coronavirus pandemic. Its challenges were more logistical in their nature than linked to a lack of demand. The ultimate impact is the same though. Last year's top line tumbled 11%, clipping earnings by a similar degree.

Yes, the beverage behemoth will work its way out of the pandemic-prompted slump. As fellow Fool writer Parkev Tatevosian points out, Coca-Cola is apt to gain lost market share as the world reopens for business since consumers are more likely to drink a Coke outside of their home than they are within it.

That's not necessarily the top reason to step into this trade while the yield's at a respectable 3%, however. More compelling is the fact that the noise -- and impact -- of the pandemic obscured the upside of moves that Coca-Cola has been making since 2014, and in a big way since 2017. Simply put, Coke has been stepping back from the bottling business by selling bottling operations back to franchisees so it can focus more on licensing. This diminishes revenue, but in that franchising and licensing is a (much) higher-margin business, the end result is greater overall profits.

This new and improved fiscal profile was just starting to come into view in 2020 when COVID-19 wrecked it. With the end of the pandemic in sight though, investors may be surprised to see just how well-suited Coca-Cola is for funding dividend payments.

Then, of course, there's the fact that Coke hasn't failed to raise its dividend for 59 consecutive years now, putting it near the very top for longevity honors among all the Dividend Aristocrats.