A new blockbuster release should lead to another record year for EA.

Electronic Arts (EA -1.44%) just closed the books on a record fiscal 2021. Strong player engagement in EA Sports titles (FIFA and Madden) and 42 million new players playing its games give EA plenty of momentum for the year ahead.

The stock has been inching closer to new highs in the first half of calendar 2021 and could be poised for a breakout. Here are three catalysts on the horizon that could send the share price higher. 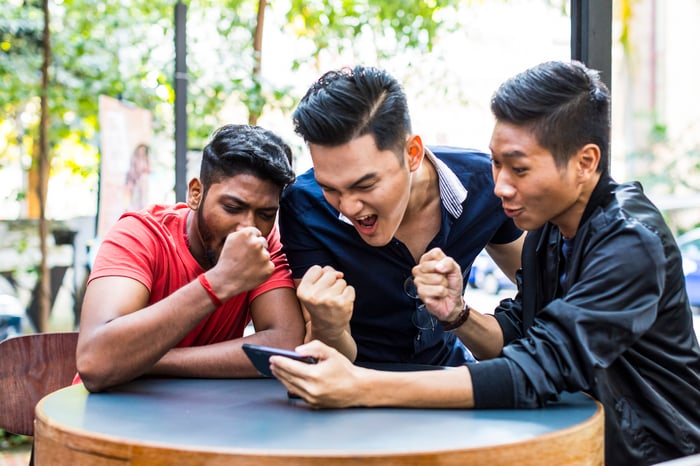 Apex Legends launched in February 2019 and quickly tapped into the demand for battle royale shooters. Apex has experienced growing viewership since late 2019 on game-streaming sites, and that has translated to growing bookings for the title.

Apex achieved $1 billion in lifetime bookings in the most recent quarter. The game averaged over 12 million weekly average users after season eight launched during the fiscal fourth quarter. In fiscal 2022, management is guiding for Apex to deliver 20% growth, achieving around $750 million in bookings, or approximately 10% of EA's total expected bookings. 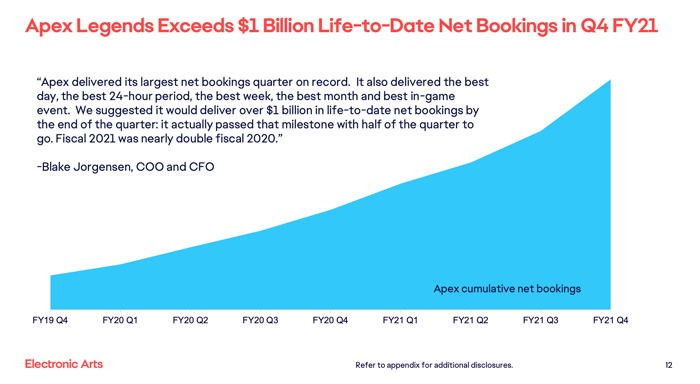 Apex is an example of how EA is turning its biggest franchises into social networks. In a multiplayer shooter like Apex, users build their friends list and team up to compete against other players. "It's going to be a huge part of the industry's business, as we've already seen, but it will continue on for us," CFO Blake Jorgensen said during the Q4 earnings call.

EA just revealed the trailer for Battlefield 2042, currently scheduled for release in the December-ending fiscal third quarter, and it could be the biggest release yet for the series. The game is being developed by EA's DICE studio, and the development team has got some innovative tricks up its sleeve to make it a competitive title on the market when it launches.

For example, Battlefield 2042 will allow AI-controlled bots to fill matches when there aren't enough players in the queue, especially given that Battlefield will allow up to 128 players to compete in a match. This is important for those who queue into the game from a location where online servers don't have enough players to fill a match. It will also introduce a new multiplayer mode called Hazard Zone and feature the largest in-game maps in the franchise yet.

CEO Andrew Wilson expects the debut of the Battlefield series on Sony and Microsoft's next-gen consoles to take the series to the next level. "If you look back through the history of our industry, every time we are able to deliver high-fidelity, more meaningfully immersive products as a result of increased processing power as platform transitions, we've been able to grow the market dramatically," he said during the last earnings call.

EA's mobile segment was the company's slowest-growing sales category in fiscal 2021, which looks weak since mobile games are the fastest-growing platform in the video-game industry. But EA's mobile woes might soon end.

Later this year, EA is planning to launch a new mobile version of Apex Legends and Battlefield. Shooters have started to gain more of a following on mobile devices in recent years, likely driven by improved graphics technology on smartphones. This trend could spell success for EA.

The addition of Glu Mobile is expected to more than double EA's mobile business to $2 billion in annual bookings in the next three years, but EA isn't settling for that. Management recently reorganized the mobile segment by bringing in new leadership and talent, which shows a real effort to get this segment growing.

The stock is undervalued compared to its peers

The stock trades at a discount to its peers, with a forward price-to-earnings multiple of 22.8. That trails Activision Blizzard's valuation of 35.8 times expected earnings and Take-Two Interactive's multiple of 25 times forward estimates.

With clear catalysts on the horizon, I don't think this valuation gap will last for too long. EA generated $1.8 billion in free cash flow in fiscal 2021, initiated its first quarterly dividend, and is experiencing momentum with its top franchises. EA is a top gaming stock to buy right now.