Please ensure Javascript is enabled for purposes of website accessibility
Log In Help Join The Motley Fool
Free Article Join Over 1 Million Premium Members And Get More In-Depth Stock Guidance and Research
By Nicholas Rossolillo - Jun 16, 2021 at 8:00AM

Robotic software could feature prominently in the future of work.

As the economy recovers from the effects of the pandemic, businesses across the country are reporting difficulty hiring employees and a shortage of workers. Some have left to work for themselves, others have quit simply to recapture some life-work balance. There has been concern vocalized in the past over AI's potential to eliminate jobs, but the fact of the matter is AI could be a necessary tool to help organizations evolve in a post-pandemic world that has a shortage of employee help.

Software-based automation could have massive potential as a result. Enter robotic process automation (RPA) company UiPath (PATH -0.10%). The company just went public this past spring and had a fantastic showing in its first quarter since its initial public offering. It isn't a cheap stock, but if you are looking very long-term, it could be time to start nibbling. 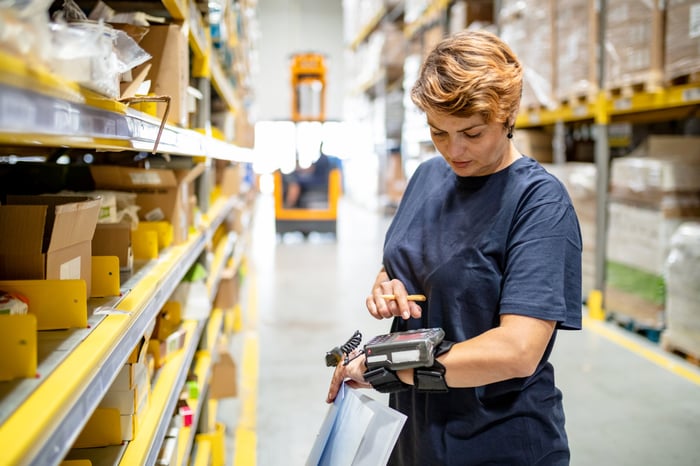 Robotic software to the rescue

UiPath is the leader in RPA, robotic software that can automate tasks people don't have the time or desire to complete. Just like physical robots have replaced repetitive tasks in the manufacturing sector, RPA can help alleviate the tedious day-to-day grind in the office, like form completion, data entry, and compliance record keeping.

UiPath's platform has some notable competition. Microsoft is a player in this field, as it seemingly is in all niches of the software realm, but other names include Pegasystems, Blue Prism, and Automation Anywhere. Low-code software development platform Appian bought its way into the RPA space at the beginning of 2020 as well.

But UiPath is the leader for a reason. Its software bots are available via subscription and can be deployed across legacy IT systems or set loose on the cloud. It makes use of computer vision -- the same AI system that Tesla and other automakers are utilizing in autonomous vehicle and advanced safety features -- to help its software bots "see" what's on a computer screen and intuitively get work done with minimal human input. UiPath says its total addressable market is currently worth $60 billion a year and going strong, which isn't farfetched if businesses continue to struggle hiring and staying up to date in the cloud era. RPA is entering the workforce, and robotic engineers (the software developers that train bots) are quickly becoming top human employees to help implement needed automation.

About that quarterly report

UiPath had an impressive first quarter of 2021 as a result of this demand for increased workflow automation. Revenue increased 65% year over year to $186 million. On an annualized basis, revenue was up 64% to $653 million. Free cash flow in Q1 was negative $20.1 million, but that is mostly by design as the company spends heavily on development of new RPA capabilities and on marketing. This will be a profitable company sooner rather than later, though. Gross profit margin on services rendered was at 74% in the quarter -- and is historically even higher than that (89% last year), but new product rollouts are dragging down the average for now until they get more customers and reach a more profitable scale.

This automation leader can afford to expand aggressively, too. It ended April 2021 with nearly $1.9 billion in cash and equivalents and zero debt, over four years' worth of operating expenses (when excluding non-cash stock-based compensation to employees) at the Q1 annualized run rate. The payoff could be huge. UiPath expects annual recurring revenue (ARR) to be at least $850 million by the end of this year, 30% higher than what it was in Q1 and 47% higher than last year.

But this growth comes at a steep premium. UiPath's market cap is at $35.5 billion as of this writing, valuing the company at over 41 times management's guidance for ARR this year. Is it worth the price tag? Clearly only if UiPath's current momentum is sustainable for at least a few more years -- and if it swings to profitability at some point. It has the potential to do so. The software industry is massive, and UiPath's current ARR is only around 1% of its immediate addressable market. Plus RPA is becoming a flexible option businesses can employ to automate a wide range of processes in their operations. If effects of the pandemic are here to stay (and I think they are), UiPath may just be getting started.

But here's what I wouldn't advise: Don't go loading up on a ton of this stock. Keep your position (if you buy one at all) very small when starting out. When I make my first buy, it will likely be less than 0.5% of my total portfolio. With such a sky-high premium, UiPath is already priced to perfection, and this is no social media-hyped meme stock headed to the moon. I plan to just dip a toe in first and brace for some possible turbulence. That can be expected with high-growth, high-premium stocks, especially within the first couple of years after an IPO. But at the very least keep this RPA leader on your radar.

Could UiPath Become the Next Microsoft?