Please ensure Javascript is enabled for purposes of website accessibility
Log In Help Join The Motley Fool
Free Article Join Over 1 Million Premium Members And Get More In-Depth Stock Guidance and Research
By Jason Hawthorne – Updated Jun 16, 2021 at 9:07AM

New approaches to treating Alzheimer's could mean even bigger gains in the future.

With all of the recent news around a new treatment for Alzheimer's disease (AD), the huge gains by smaller biotechs developing treatments can get lost. The excitement is understandable. There have been 130 failed attempts to bring an AD treatment to market since 1998.

Now that the Food and Drug Administration has approved Biogen's (BIIB -4.46%) Aduhelm despite its mixed results, it theoretically made it much easier for new treatments to get the green light.

That anticipation -- and positive early results -- are why shares of Annovis Bio (ANVS 0.07%) and Cassava Sciences (SAVA -1.76%) are both up more than 1,000% so far this year. They each offer a new way for treating Alzheimer's that has shown promising results. Those novel approaches could be the path to profits for investors willing to buy shares while the future is still uncertain. 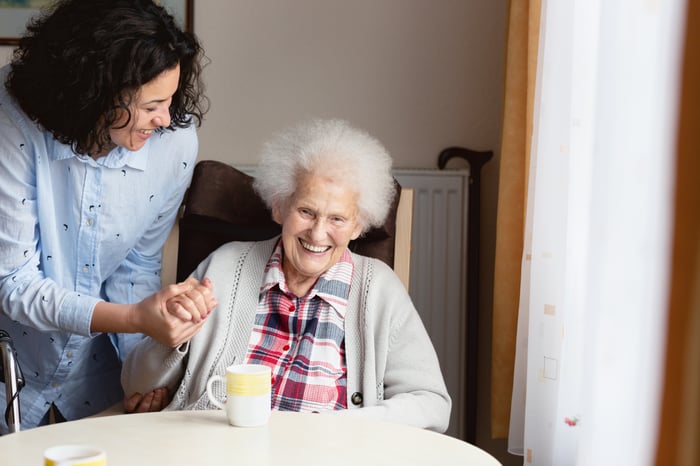 Unlike most AD drugs, Annovis Bio's ANVS401 isn't designed to get rid of amyloid in the brain. Rather than address the symptom apparent in the end-stage of Alzheimer's, the company is targeting the initial steps of the toxic cascade. Its scientists have focused on reducing a neurotoxin protein that leads to nerve cell death. These proteins are valuable when the brain is slightly damaged. However, they linger when damage is severe, impeding the highway cells use to transport substances.

Despite its phase 2 study only being set up to detect biomarkers (secondary indicators of possible improvement), preliminary data is showing gains in primary function. It's also working for Parkinson's disease (PD). The study consists of 14 AD patients and 14 PD patients. In the AD patients, ANVS401 led to 30% improvement in cognition in just 25 days. In PD patients, there were statistically significant gains in motor function, coordination, and speed. Inflammation was also lower.

Its scientists were not surprised. In four previous animal models studied for memory and learning, the drug led to a full recovery in mice with AD, stroke, Down syndrome, and traumatic brain injury. The phase 2 study continues as Annovis, and the investing community, eagerly await data from the remaining 40 participants in the study. That phase is projected to conclude in September. If previous data is any indication, the gains in the stock might have only just begun. 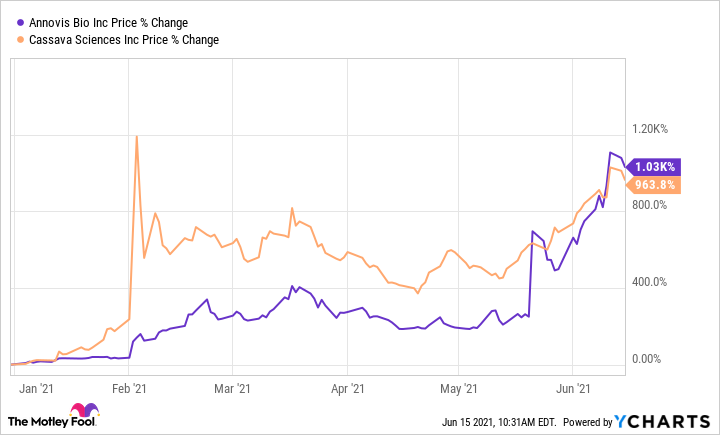 Like Annovis Bio's treatment, Cassava's simufilam isn't designed to remove amyloid from the brain. Instead, the drug restores the normal shape of a scaffolding protein. That protein -- altered filamin A (FLNA) -- helps build the cells' flexible structure. It is the stuff responsible for physically holding up the brain. When it folds incorrectly, it creates inflammation like that observed in Alzheimer's.

In February, the company announced it had ended its phase 2 study and had agreement from the FDA on how to proceed with phase 3. That news sent the stock nearly 400% higher over the next few days. That's even after it gained more than 250% in September 2020, the month its initial results were released. Data from that study showed Alzheimer's patients who received the treatment for six months demonstrated both improved cognition and behavior scores. Cognition rose 10% and dementia-related behaviors fell 29%.

The company has also received several votes of confidence from the National Institutes of Health (NIH). Last spring, the agency awarded Cassava $2.5 million. This spring, it was awarded $2.7 million. Overall, Cassava has received about $12 million from the NIH. With the clinical progress clear and the funding in place, a phase 3 study is expected to kick off later this year.

CEO Remi Barbier captured both the historical futility of AD drugs and the new hope in a recent interview when he said: "They call it the graveyard of drug development, but cancer was like that for about 30 years. Until it wasn't." In that context, a successful trial could result in even more massive returns for shareholders despite the gains in the past year.