Please ensure Javascript is enabled for purposes of website accessibility
Log In Help Join The Motley Fool
Free Article Join Over 1 Million Premium Members And Get More In-Depth Stock Guidance and Research
By Rich Duprey – Jun 16, 2021 at 8:00AM

They've proven themselves capable in good markets and bad.

Dollar stores were already a dynamic force in retail from when the housing market collapse over a decade ago sent the economy reeling into recession, attracting even upper-income shoppers to their aisles.

Last year's pandemic cemented their role as essential businesses, often because their broad assortment of consumable goods and even fresh produce allowed strapped consumers to consolidate all of their shopping in one trip.

While most had expansion plans already in place, the post-pandemic period is likely when those new stores will flourish and we'll see just how well the investments pay off. Below are three discount retailers investors should keep their eyes on now. 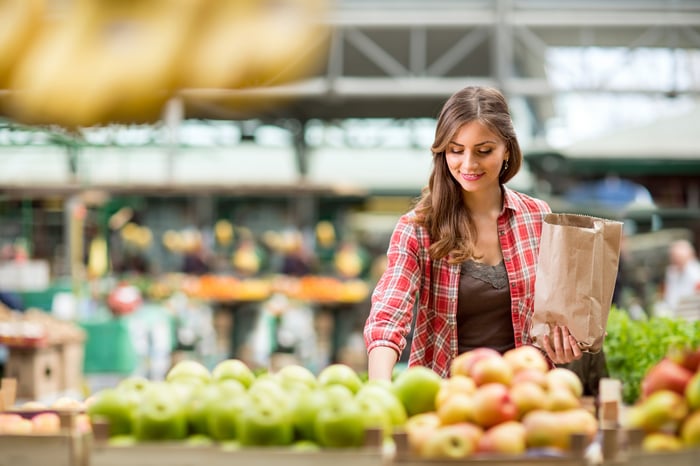 Big Lots (BIG -4.29%) sells a full range of goods, from groceries and household items to home furnishings and toys. And because its stores have a much smaller footprint than rival big-box chains, it's not an overwhelming experience for the consumer.

That translated into a big gain for the discounter, which saw sales jump from $5.3 billion in 2019 to some $6.2 billion in 2020. It benefited from its product assortment as many consumers stayed home and fixed up their homes.

Last month it reported record first-quarter results as sales hit $1.6 billion, up 13% year over year, on an 11% gain in comparable sales, indicating the upward momentum likely isn't over.

Big Lots plans on opening 50 to 60 new stores this year, adding to its base of over 1,400 locations. President and CEO Bruce Thorn says that "we're well positioned for post COVID-19. And I think the customer is healthy. And those trends on value home and e-commerce are going to stay and be strong."

Even though the stock has nearly doubled in the past year, it still trades for four times trailing earnings, 10 times next year's estimates, and seven times the free cash flow it produces, making it a deep discounter worthy of the name. It also pays a dividend currently yielding a modest 1.7% annually.

Dollar General (DG 0.16%) has some of the biggest expansion plans of any retailer, discount or otherwise. It intends to open 1,050 new stores, remodel 1,750 stores, and relocate 100 stores, representing 2,900 real estate projects in total. It's also expanding its new pOpshelf concept store that sells most of its goods for $5 or less. It opened three new stores in the first quarter, bringing the total to eight, but plans to have 50 by the end of the year and believes the market can support as many as 3,000.

As the biggest dollar store chain with almost 17,000 stores, Dollar General intends on maintaining its supremacy. Yet despite the far-flung footprint, it was still able to beat analyst revenue and earnings forecasts while suffering only modest declines in comp growth rates.

Having also invested heavily in expansion of food and beverages as consumers began calling for healthier options at affordable prices, it offers investors a stable business model that is producing robust growth at a reasonable price.

At 18 times trailing earnings and forward estimates, it's not the bargain basement stock Big Lots might be, but as the industry leader it arguably deserves the premium it carries. It also pays a dividend, though it yields less than 1%.

Behind Dollar General stands rival Dollar Tree (DLTR -0.54%), almost as large with over 14,000 locations between its namesake chain and the Family Dollar brand.

Dollar Tree is also merging the two stores together in rural communities currently underserved by a discount chain. While both stores keep their individual banners, the stores inside are actually a combination of the two and give consumers a broad range of affordable goods. It's easy to see this expanding to large markets because it minimizes the cost of building a store.

Even so, Dollar Tree has big expansion plans of its own, opening 600 new stores and renovating 1,250 Family Dollar stores in fiscal 2021.

The Family Dollar chain has turned into a success story after being a drain on performance for years after its acquisition, and Dollar Tree is holding its own. Having "broken the buck" and introduced slightly higher-priced items onto its shelves to increase production selection and name brand availability, the chain continues to grow, though it has faced greater variability than its rivals.

At under $100 a share at the time of this writing, Dollar Tree trades at 16 times earnings, 14 times estimates, and at a fraction of the sales it produces. It also goes for 16 times its free cash flow, making it a decent stock to consider for the price.

Yet the three stocks have shown they can weather the storms and extremely tough conditions. They've learned a lot over the past decade and are putting that knowledge to work. Look for them to continue thriving in the post-pandemic era.