Please ensure Javascript is enabled for purposes of website accessibility
Log In Help Join The Motley Fool
Free Article Join Over 1 Million Premium Members And Get More In-Depth Stock Guidance and Research
By Prosper Junior Bakiny – Jun 17, 2021 at 9:28AM

Can they keep outpacing the popular cryptocurrency?

In the past few months, several big-name companies -- including Tesla and Square -- have collectively bought billions of dollars' worth of Bitcoin. The cryptocurrency is obviously rising in prominence, which bodes well for the bull case for the asset, which some investors believe will eventually replace fiat (or government-issued) currency.

Because of these factors (and others), Bitcoin has easily outpaced the performance of the broader market year to date. However, some stocks have performed significantly better than the digital coin. Two such stocks are Ocugen (OCGN -2.72%) and Novavax (NVAX -6.42%). Are these high-flying biotech stocks buys? 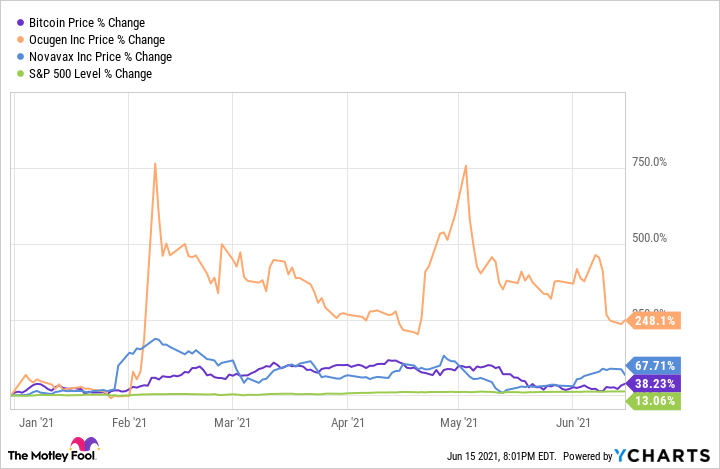 Ocugen is hoping to make a name for itself by entering the COVID-19 vaccine market. The company is developing Covaxin, a potential vaccine for the disease, in collaboration with India-based Bharat Biotech. Bharat is running a phase 3 study in India for this candidate, and according to interim results released by the two partners back in March, Covaxin proved 81% effective at preventing COVID-19.

What's more, there is evidence that it is also effective against newer variants of the SARS-CoV-2 virus that causes the disease, particularly those that emerged in the U.K. and Brazil. Based on these results, Ocugen had planned to apply for emergency use authorization (EUA) from the U.S. Food and Drug Administration (FDA) for Covaxin.

Importantly, the company will have the right to commercialize the vaccine in the U.S. and Canada if it is approved. Ocugen is set to keep only 45% of the profits Covaxin will generate in these countries. However, the biotech's plan to request an EUA hit a major roadblock. On June 10, the company announced that under the recommendation of the FDA, it will now pursue a Biologics License Application (BLA) for Covaxin. 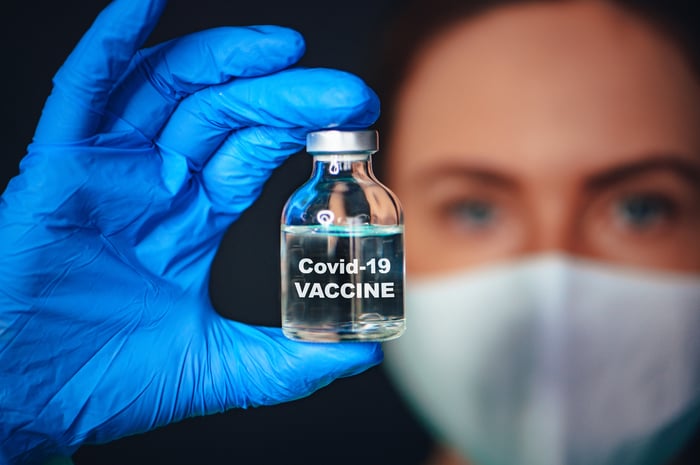 This change matters for one simple reason. An EUA would take only a few weeks (at most) to get approved, whereas a BLA typically takes at least six months and can take up to 10. In other words, Covaxin won't hit the U.S. market anytime soon, which is awful news for Ocugen and its shareholders. It is no surprise that the company's stock plunged on the news. But there is more.

The FDA also requested additional information and data to support the company's BLA for Covaxin, which means even the six- to 10-month timeline to bring Covaxin to market seems optimistic at the moment. By the time Ocugen's candidate finally earns FDA approval, COVID-19 vaccines will likely be commonplace.

And whatever profit the company will generate from it in the U.S. and Canada, Ocugen won't even retain half of it. Further, the rest of the company's pipeline is thin, and none of its other candidates are even close to reaching late-stage clinical trials. For those reasons, investors would do well to stay a safe distance away from this biotech stock.

Novavax is also developing a coronavirus vaccine candidate, one by the name of NVX-CoV2373. And although the company has yet to earn an EUA for its potential vaccine, there are a few things to consider. First, the biotech initiated rolling reviews for its candidate in several countries, including Canada and the European Union. The company expects to file for an EUA in both the U.K. and the U.S. in the third quarter of its fiscal year 2021.

Second, Novavax's vaccine was highly effective in a phase 3 clinical trial conducted in the U.K., with an overall efficacy of 90%; it proved 100% effective against moderate and severe cases of the disease. NVX-CoV2373 also seems potent against severe cases of the disease caused by the newer variants of the virus, such as those that have emerged in the U.K. and South Africa.

Third, Novavax has already signed agreements with several governments worldwide to supply more than 300 million vaccine doses. Even if the company is late to the market, it will generate at least modest revenue from NVX-CoV2373.

Novavax does have other things going its way; two in particular deserve mention.

On April 23, the biotech announced that data from a phase 2b clinical trial for a malaria vaccine called R21 was published in Preprints with The Lancet, an online journal that publishes non-peer-reviewed medical research. R21 was developed by the University of Oxford and is licensed to Serum Institute of India, but Novavax's Matrix-M adjuvant helped boost its efficacy. 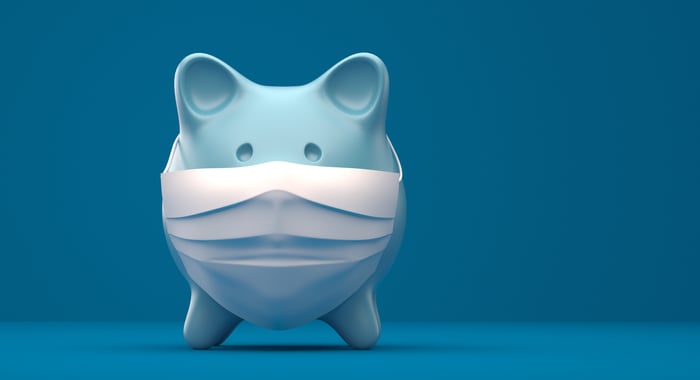 Then there's the company's NanoFlu, a potential flu vaccine for adults aged 65 and older. According to the U.S. Centers for Disease Control and Prevention, between 70% and 85% of seasonal flu-related deaths have occurred in patients 65 years and older in recent years. There is still a dire need for a vaccine that addresses this problem.

In a phase 3 clinical trial, NanoFlu demonstrated non-inferior immunogenicity (the ability to trigger an immune response in the body) compared to Fluzone, the leading flu vaccine for seniors on the market. NanoFlu is likely to go on to earn regulatory approval, making it another long-term opportunity for Novavax.

But the company has yet to file for FDA approval for this candidate, much to the dismay of investors. Still, in my view, the company's late-stage pipeline (NanoFlu and NVX-VoV2373) could reach combined annual worldwide sales of several hundred million dollars. For a company that currently has no products on the market, this bodes well for its future. That's why I think Novavax is worth serious consideration, especially for those investors willing to be patient.