Please ensure Javascript is enabled for purposes of website accessibility
Log In Help Join The Motley Fool
Free Article Join Over 1 Million Premium Members And Get More In-Depth Stock Guidance and Research
By Adria Cimino - Jun 17, 2021 at 6:00AM

The company is one of Wood's biggest biotech holdings.

Star investor Cathie Wood is usually one to follow. The founder of ARK Invest has watched her biggest fund gain nearly five times more than the S&P 500 over the past five years. But what about when Wood goes for a company that's disappointing investors?

That's the case with Vertex Pharmaceuticals (VRTX -1.24%). In less than a year, the biotech company ended development of two candidates in one of its rare-disease programs. After news broke of the latest to go, the stock sank more than 11% in one trading session.

That's when Wood moved to increase her Vertex holdings. The stock is among the top 10 holdings in the ARK Genomic Revolution ETF. Now the question is, should you follow Wood's lead and consider shares of this biotech company? 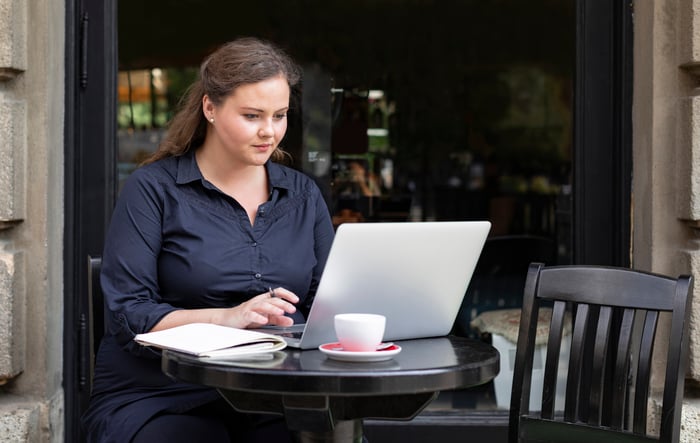 More than $6 billion in revenue

First, a little background about the company. Vertex is the leader in cystic fibrosis (CF) treatment. The company last year made $6.2 billion from its CF portfolio. In late 2019, the U.S. Food and Drug Administration (FDA) approved Vertex's newest drug, Trikafta. It became a blockbuster the next year.

The drug could be an important revenue driver in the coming years because it has the potential to treat more than 90% of all CF patients. Revenue will grow progressively from today as Vertex wins approvals in different countries and age groups.

Morningstar predicts $7 billion in sales this year for Vertex, and Trikafta will lead the way. Thanks to booming sales, Vertex has been profitable for the past four years -- and last year reported more than $2.7 billion in net income.

This is all very positive, but investors are concerned about what will happen when increases in CF sales start to slow. At a certain point, Vertex will have reached most potential patients. CF is a rare disease, so once Vertex serves all of today's market, the number of new patients over time will be limited.

Eyes have been on two pipeline programs in particular: treatments for rare lung and liver disorder alpha-1 antitrypsin deficiency (AATD), and gene editing for blood disorders. AATD has spurred Vertex's share-price woes over the past year. The company ended development of one candidate last fall and a second candidate this month, which was the reason for the recent share decline. Vertex said it would bring other AATD candidates into trials next year.

A normal part of drug development

At the same time, Vertex's results in its gene-editing program for blood disorders sickle cell disease and beta thalassemia are encouraging. The company offered an update this month. In a follow-up after more than three months on 22 patients, all of them showed "consistent and sustained" response to the therapy. And more good news is that this is Vertex's most advanced program outside of CF. The company aims to file for regulatory approval in the coming 18 to 24 months.

Today, stem-cell transplants are the only cure for the two blood disorders. But they are complicated and not options for everyone. Vertex is hoping its one-time gene-editing therapy may offer another option.

Unfortunately, investors' concern over AATD has outweighed their optimism about the gene-editing program. Vertex shares have dropped about 20% so far this year.

For Cathie Wood, this created opportunity. Vertex's shares are trading at about 17 times forward earnings estimates. That's the lowest since at least January 2020. 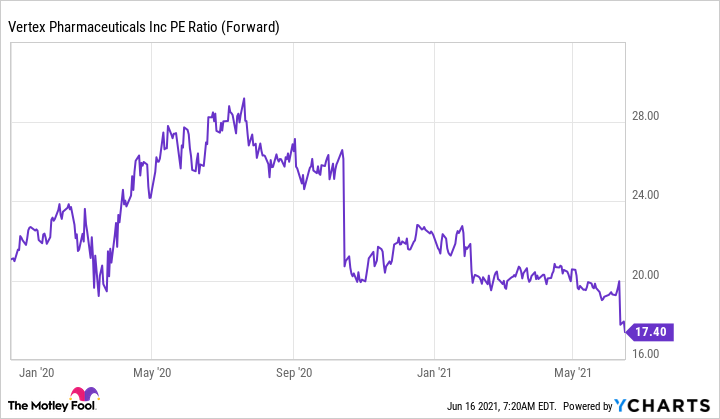 Now let's get back to our original question. Should this also create a buying opportunity for other long-term investors?

My answer is "yes," and here's why: We can expect strong CF revenue from Vertex for several years. Vertex even predicts its CF leadership will last through the late 2030s. The billions in dollars of revenue will fund pipeline programs, and we can add to that Vertex's $6.9 billion in cash. This amount of cash even offers Vertex the possibility to buy a close-to-market candidate at any point.

If Vertex is successful with AATD, that would be a plus. But I'm particularly interested in the gene-editing therapy for blood disorders. It's closer to market and could be a game changer.

Vertex may not deliver big gains this month or even this year. But investors who favor buying and holding are likely to reap rewards further down the road, so they may be very happy about their decision to follow Cathie Wood.