The stock is still down about 36% from recent highs.

Shares of data-driven advertising company The Trade Desk (TTD) jumped sharply on Thursday, following their 10-for-1 split. Today marks the first day that the company's stock is trading on a split basis.

Stock splits in and of themselves don't do anything to make shares better investments. But The Trade Desk's split -- following massive shareholder value creation since its initial public offering in 2016 -- does highlight management's consistent ability to grow revenue and earnings, something likely to persist in the coming years.

This 10-for-1 split, therefore, is a good reminder of what an incredible business The Trade Desk is. 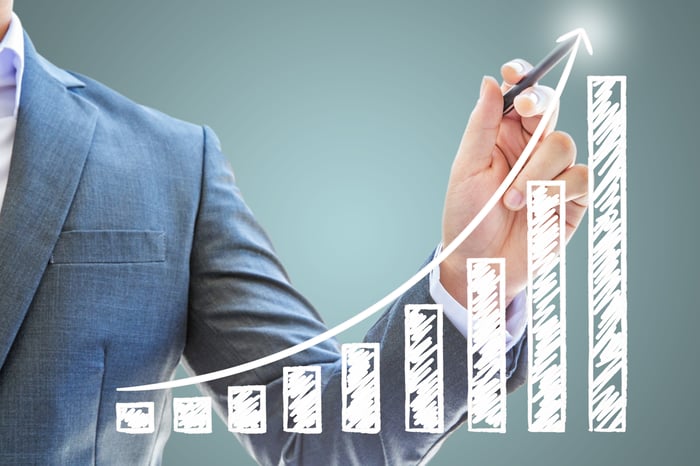 The tech stock's split follows a period of incredible growth for The Trade Desk, and management says the move reflects its confidence in the company's prospects.

"The Trade Desk has consistently delivered strong top line growth and GAAP profitability as a publicly traded company," CEO Jeff Green said in a press release about the stock split. "In that time, we have emerged as the default demand side advertising platform for the open internet, and we continue to invest to build on that leadership position."

Over the past four years, The Trade Desk's revenue has risen more than fourfold and its net income has increased 12-fold.

Even in 2020 -- when digital advertising took a temporary hit as uncertainties surrounding COVID-19 led some ad buyers to reduce spend or even pause their campaigns -- The Trade Desk saw its revenue increase 26% year over year. And as the year ended, its momentum picked up sharply. "Those brands spending more than $1 million on our platform in 2020 more than doubled from a year ago," The Trade Desk said in its fourth-quarter 2020 earnings call.

Adjusting for U.S. political ad spend, The Trade Desk's top-line revenue growth accelerated further in the first quarter of 2021 compared to its impressive momentum at the end of last year.

"Excluding political spend related to the U.S. elections last year, which represented a mid-single-digit percent share of our business in Q1 of 2020, revenue increased around 42% year over year in Q1 of this year," CFO Blake Grayson said in the company's first-quarter earnings release. "This represents a material acceleration on a sequential basis from Q4 of 2020 after excluding election spend."

Furthermore, Grayson said the company saw broad-based strong growth across every region and channel during the quarter. In fact, ad spend on its platform accelerated in every one of its major geographic regions, management said.

Though The Trade Desk's stock split might be drawing attention to the stock on Thursday, the company's fundamentals and recent sell-off are what make it seem like an attractive long-term investment.

Even though shares are up sharply today, they are still notably far below a split-adjusted all-time high of $97.28. Shares were slammed earlier this year along with many other growth stocks -- and The Trade Desk has been slow to recover, still trading 36% below a 52-week high.