The fun ride might not last if analysts are right about these stocks.

Meme stocks have been all the rage so far this year. That's understandable, with several of them delivering triple-digit and even four-digit percentage gains.

However, what goes up can come down. Analysts don't expect the online frenzy fueling the ginormous jumps for some of the most popular stocks will be sustainable. Here are three meme stocks that Wall Street thinks will plunge by more than 20% within the next 12 months. 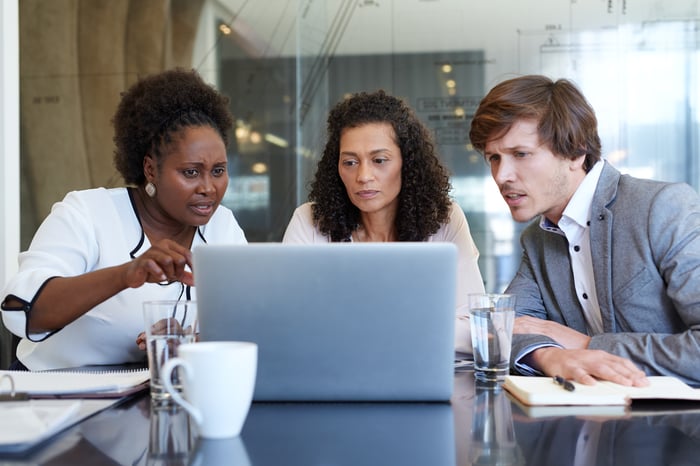 AMC Entertainment (AMC -2.14%) ranks as the best-performing meme stock of all. Shares of the movie theater operator have skyrocketed close to 2,500% year to date.

The consensus among analysts, though, is that the stock could lose 90% of its current value. Even the most optimistic analyst surveyed by Refinitiv has a price target for AMC that's more than 70% below the current share price.

But isn't AMC's business picking up? Yep. The easing of restrictions has enabled the company to reopen 99% of its U.S. theaters. AMC could benefit as seating capacity limitations imposed by state and local governments are raised. The releases of multiple movies this summer and later this year that are likely to be hits should also help.

However, Wall Street clearly believes that AMC's share price has gotten way ahead of its business prospects. The stock is trading at nearly eight times higher than it was before the COVID-19 pandemic.

Only a few days ago, it looked like Clover Health Investments (CLOV -6.61%) might push AMC to the side as the hottest meme stock. Retail investors viewed Clover as a prime short squeeze candidate.

Since the beginning of June, shares of Clover Health have jumped more than 65%. Analysts, however, don't expect those gains to last. The average price target for the stock is 25% below the current share price.

Clover Health's valuation does seem to have gotten out of hand. The healthcare stock currently trades at more than 170 times trailing-12-month sales. That's a nosebleed level, especially considering that the company is the subject of investigations by the U.S. Department of Justice and the Securities and Exchange Commission.

Still, Clover Health could deliver improving financial results this year. The company hopes to significantly increase its membership by targeting the original Medicare program. This represents a major new market opportunity in addition to its current Medicare Advantage business.

At one point earlier this year, Sundial Growers (SNDL -4.21%) appeared to be a legitimate contender to become the biggest winner among meme stocks. The Canadian marijuana stock vaulted more than 520% higher year to date before giving up much of its gains. However, Sundial's share price has still more than doubled in 2021.

Analysts anticipate that the pot stock could fall even further. The consensus price target for Sundial reflects a 23% discount to its current share price. One analyst even thinks the stock could sink 55%.

There certainly are reasons to be pessimistic about Sundial's core cannabis business. The company's net cannabis revenue fell year over year in the first quarter of 2021. Although Sundial is taking steps that it hopes will turn things around, it remains to be seen if those efforts will succeed.

Sundial's business deals could give investors reasons for optimism. After all, the company posted positive adjusted earnings before interest, taxes, depreciation, and amortization (EBITDA) in Q1 due to its investments.

However, the cash that Sundial is using to make these investments has come at the cost of increased dilution of its stock. The company can't afford any additional dilution without having to resort to desperate measures to keep its listing on the Nasdaq stock exchange.