Please ensure Javascript is enabled for purposes of website accessibility
Log In Help Join The Motley Fool
Free Article Join Over 1 Million Premium Members And Get More In-Depth Stock Guidance and Research
By Adria Cimino - Jun 18, 2021 at 6:00AM

Let's look at data -- and other points needed for market dominance.

Moderna (MRNA -5.93%) and Pfizer (PFE -1.18%) have remained a step ahead of most potential coronavirus vaccine rivals. That's thanks to their products' overall efficacy of more than 90%. But one up-and-coming vaccine maker just reported data that may give these leaders a run for their money.

Novavax (NVAX -8.19%) plans to submit its coronavirus vaccine candidate for emergency authorization in various countries including the U.S. in the third quarter. And the company has already lined up orders for doses worldwide.

Now the question is whether Novavax has what it takes to join leaders Pfizer and Moderna at the top. Let's take a look at how Novavax compares to its more advanced rivals. 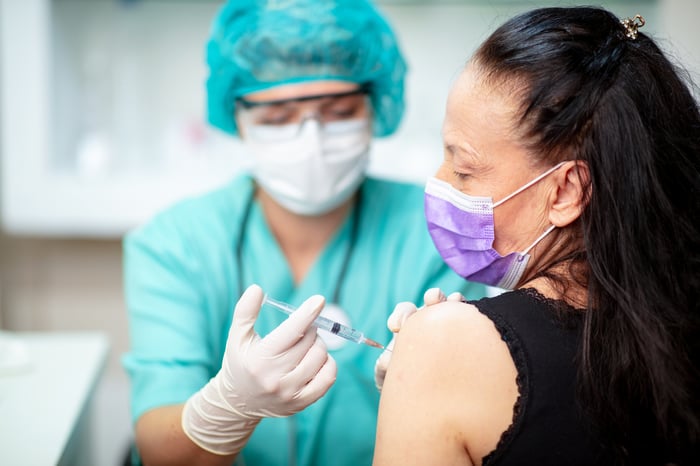 First, let's examine efficacy. Novavax recently said its candidate is 90.4% effective overall -- that means in preventing all coronavirus cases, regardless of their severity. The investigational vaccine showed 100% efficacy when it comes to preventing moderate-to-severe cases of COVID-19. The data are from Novavax's phase 3 U.S. trial. The study enrolled more than 29,000 people.

We should keep in mind that Novavax began its U.S. study in December, and efficacy was examined from Jan. 25 through April 30. Moderna and Pfizer began their phase 3 studies in July of last year, so there's been more time for cases to accrue.

That means the comparison isn't completely apples-to-apples, but it can offer us a general idea of where Novavax stands compared to its rivals. Moderna's phase 3 study accrued more than 900 coronavirus cases through April 9. The overall efficacy of Moderna's vaccine stands at more than 90% -- and its effectiveness in preventing severe coronavirus is more than 95%.

The Pfizer phase 3 trial included more than 900 cases through the middle of March. The vaccine was 91.3% effective overall and 95.3% effective against severe disease.

For the moment, Novavax looks more effective against severe disease. However...Moderna also reported 100% efficacy against that level of illness in its initial trial analyses; that percentage went down as cases accrued.

So, it may be too early to say Novavax's efficacy in severe disease is better than that of today's leaders. It's a safer bet to say it's about on par with those rivals.

Where Novavax may have an advantage right now is the formulation of its vaccine candidate, which is stable at standard refrigerator temperatures. That's for at least six months, Novavax told Genetic Engineering and Biotechnology News late last year.

However, Moderna and Pfizer are making progress on temperature requirements. Moderna recently said its vaccine can be kept for as long as three months at refrigerator temperatures. It's waiting for a nod from the Food and Drug Administration before that can be applied. Right now, it's authorized for one month's storage at those temperatures.

Novavax's investigational vaccine may soon have a chance to prove itself in the real world -- if the FDA grants it authorization. So far, things are looking good. Novavax's efficacy data are strong. And its temperature requirements make it an even easier vaccine to store than those from Pfizer and Moderna. These two elements could clearly help Novavax on the path to gaining market share.

The biggest problem so far

Novavax's main problem so far has been obtaining certain raw materials to make its vaccine. The biotech company said it expects suppliers to add capacity so that it can in turn operate at full capacity; Novavax aims for that to happen by the fourth quarter.

If raw materials continue to be a problem beyond that point, Novavax could struggle to keep up with its more advanced rivals. But if the raw-materials situation improves, the picture looks bright. After all, the company is scaling up to produce -- with help from its partners -- 2 billion doses a year. And it expects to be at that level as early as the end of this year.

Of course, major market share won't happen overnight. Moderna and Pfizer have already gained a lot of ground and established themselves in the top spots. But there still is plenty of room for Novavax to approach -- even pretty closely. So, if the raw-materials problem doesn't hold Novavax back, we could be looking at a third major player in the coronavirus vaccine market.