Please ensure Javascript is enabled for purposes of website accessibility
Log In Help Join The Motley Fool
Free Article Join Over 1 Million Premium Members And Get More In-Depth Stock Guidance and Research
By Daniel Sparks - Jun 18, 2021 at 9:20AM

Kroger's business may not be sexy. But this doesn't mean investors should overlook the grocer's investment potential.

Shares of Kroger (KR 0.94%) rose sharply on Thursday, climbing more than 4%, even as the S&P 500 dipped slightly. The stock's gain came after the grocer reported better-than-expected fiscal first-quarter results and management raised its outlook for its full-year financial performance.

There was a lot to like about the quarter. Not only were revenue and non-GAAP (adjusted) earnings per share both ahead of analysts' estimates, but the company's strong financials relative to its conservative valuation continued to show why the stock is attractive -- especially for investors looking for income. 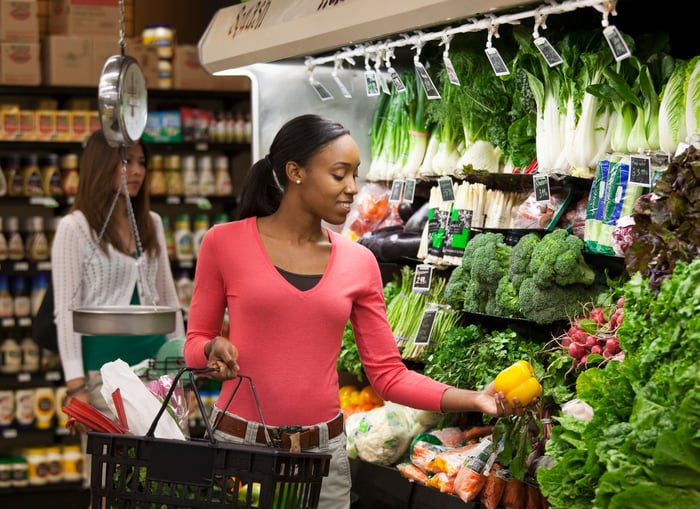 Kroger was up against some tough comparisons in its fiscal first quarter. The year-ago period included a period when people were stocking up on goods as they worried about how long COVID-19-related lockdowns would last. So it wasn't surprising when Kroger said its same-store sales declined 4.1% during the period or that total sales fell from $41.5 billion in the year-ago quarter to $41.3 billion. Analysts were expecting a worse decline, with a consensus forecast for fiscal first-quarter revenue of about $39.8 billion.

But as Kroger points out, same-store sales increased 14.9% on a two-year stack basis. Likewise, though digital sales grew just 16% year over year during the period, they were up 108% on a two-year stacked basis (a measure that helps investors zoom out and view the past two years in comparison to the two years before).

With strong fundamentals, healthy cash flow, and growing sales on a two-year stack basis, Kroger looks particularly attractive trading at just 12 times earnings. Dividend investors, in particular, may like the stock, as the company currently has a 1.9% dividend yield. Further, the dividend is growing nicely, with its quarterly payout more than doubling over the past six years.

While Kroger may not be as sexy as some fast-growing growth stocks, it offers a lot of value for investors, given its conservative valuation relative to its financials. And its growing dividend is like icing on the cake.