Please ensure Javascript is enabled for purposes of website accessibility
Log In Help Join The Motley Fool
Free Article Join Over 1 Million Premium Members And Get More In-Depth Stock Guidance and Research
By Demitri Kalogeropoulos – Jun 18, 2021 at 11:29AM

The supermarket chain raised its 2021 outlook after a strong first quarter.

Kroger (KR -2.08%) investors were bracing for some bad news in the supermarket chain's fiscal first-quarter results. After all, the company was going up against an unusual prior-year period that included some of the biggest pantry-stocking demand spikes of the pandemic.

Yet Kroger outperformed expectations by announcing only modest sales declines. And management brightened its outlook on the rest of the year.

Let's dive right in and see what else the report tells us about this national grocer. 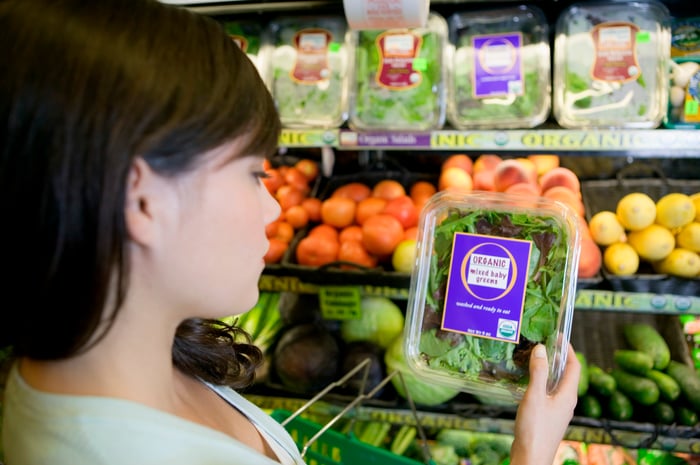 Kroger had a soft landing

With consumer mobility returning to normal, investors were expecting Kroger to report a sales drop. It had an unusually high bar to clear, too, as revenue a year ago soared 19% in the initial phase of the pandemic. Kroger had previously been growing at about 2% before comparable-store sales began surging during restaurant and retailing shutdowns.

Kroger's 4% decline in the first quarter was surprisingly strong. On a two-year basis, which smooths out the pandemic's noise, revenue is up 15%, management noted. "Customers are responding to the investments we have made in digital," CEO Rodney McMullen said. That popular e-commerce offering is allowing Kroger to hold its own against Walmart (WMT -1.93%), its main competitor in most markets.

The news was just as good on profits. Several cost factors ate into earnings, including rising prices and higher labor expenses. But gross profit margin was still strong at 23% of sales. Adjusted earnings fell just slightly, dipping to $1.19 per share from $1.22 per share a year ago.

Operating cash flow wasn't nearly as strong as a year ago, but Kroger still generated over $2 billion to give it plenty of flexibility for the rest of the year. "We were disciplined in driving costs out of the business," McMullen said.

Kroger is raising the bar

The sum of those positive trends was a brightening outlook on both the top and bottom lines. Kroger now sees comps falling by between 2.5% and 4%, marking an improvement over the prior forecast range of a drop between 3% and 5%. On a two-year basis, that equates to growth of roughly 11%.

The earnings forecast got a similar upgrade, with two-year operating profit on pace to rise by between 9% and 11%. These predictions describe a stronger business than the one that shareholders saw before the pandemic started scrambling consumer demand trends in early 2020. If you believe the management team, then you can expect faster annual sales growth and yearly profit increases that approach double digits.

We won't know for a few quarters whether Kroger really is on a better competitive footing following the pandemic. But these results suggest consumers are sticking with the chain and remain connected to popular in-store brands like Simple Truth. Kroger's digital selling platform is giving it room to compete against industry heavyweights like Walmart. Thus, it's no surprise that investors cheered the news by pushing its stock higher following the announcement.

Kroger appears to be on a strong growth path, with shareholder returns likely to be amplified by rising profitability and stock buybacks. Those are attractive characteristics for investors seeking exposure to the competitive, but lucrative, consumer staples retailing niche.