Please ensure Javascript is enabled for purposes of website accessibility
Log In Help Join The Motley Fool
Free Article Join Over 1 Million Premium Members And Get More In-Depth Stock Guidance and Research
By Alex Carchidi - Jun 19, 2021 at 7:32AM

Its growth trajectory is ready to accelerate.

After 2020, nearly everyone is feeling like they could use a vacation. And, for many people, that means traveling to Las Vegas for some fun. Luckily for investors, there's one stock in particular that's already cashing in on pent-up demand among Vegas vacationers -- and it has nothing to do with gambling.

Thanks to its luxury cannabis dispensaries in Las Vegas, Planet 13 Holdings' (PLNH.F -5.59%) stock price has grown more than 283% in the past 12 months, and there's almost certainly more to come. The small company's stores aim to make buying marijuana an experience rather than a transaction, which is perfect for tourists looking for a thrill. But, given its struggle with turning a profit, can its ambitious expansion plans pay off? 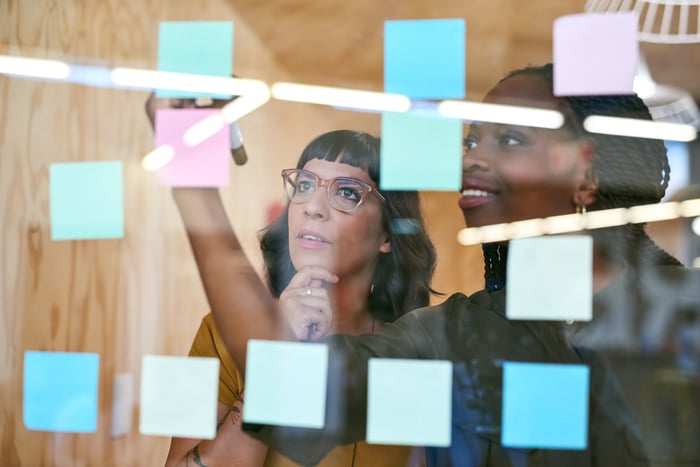 Why it's worth buying

The secret to Planet 13's success so far is its primary retail location near the Las Vegas Strip. In 2019, the store accounted for about 9% of Nevada's total cannabis sales, serving more than 1 million customers. In 2020, it made $70.49 million in total revenue despite a collapse in tourism. As tourism rebounds to its 2019 levels throughout the rest of this year and next, the Las Vegas store will continue to be the company's main money faucet.

It's also a competitive advantage, as competitors will likely struggle to find real estate that's as close to the major tourism areas. So, one of the biggest reasons to buy Planet 13's stock is that it's uniquely positioned to sell cannabis to an eternally fresh crowd of people eager to spend money and have a good time while they're on vacation.

Planet 13's growth prospects are nothing to sneeze at, either. The company will be opening a new store in California in July, which will be its first foray outside of Nevada. The Santa Ana store will be its third location in total, and it could be the key to expanding revenue over the next couple of years. Its second location, the Medizin dispensary, opened in the fourth quarter of 2020, meaning that it likely hasn't had a normal economic environment to operate in yet. That's actually favorable for investors, as the store could lead to unexpectedly high revenue growth as things begin to normalize.

Over the next five years, management plans to open more than eight new stores in lucrative markets along the east and west coasts of the U.S. The potential rewards for shareholders are quite high, as the company will be expanding its operations several times over in comparison to where it is now. Finally, it's unlikely that the market has fully priced in the stock's future growth, as there's no finalized information about plans for expansion beyond the store in California. 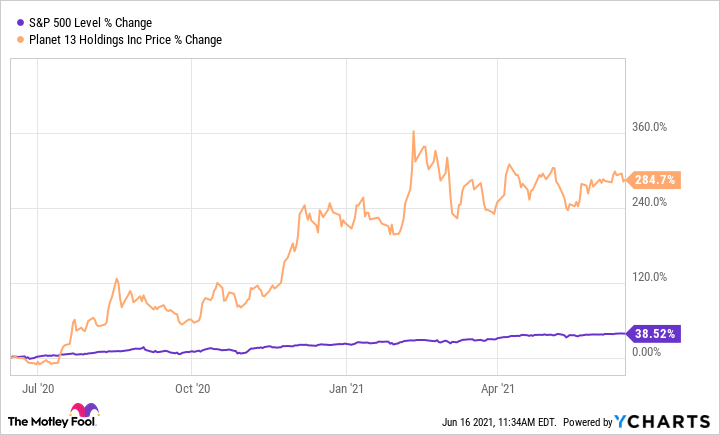 There's a lot of potential upside for investors with Planet 13, but it isn't a proven company yet, and risk-averse people should probably look elsewhere.

Despite its killer location in Las Vegas, its profit margin is thin and inconsistent, and it's unclear whether the new store in Santa Ana will provide as much revenue as its high-traffic location near the Strip. At a minimum, the company will need to adjust the new store's strategy to account for a much smaller flow of potential new customers, perhaps by starting new initiatives to encourage repeat business. Furthermore, it's uncertain whether the recovery from the pandemic will be enough to propel sales to grow faster than they had been growing before in Las Vegas.

In fact, revenue from its Las Vegas location didn't increase much during its first full year of operations in 2019. It earned $16.6 million in the first quarter of the year, and $16.8 million in the fourth quarter. After that, the pandemic started to sharply impact travel and sales volume dropped accordingly. So, it's possible that Planet 13 was capturing as many of the city's tourists as possible, making future growth less likely -- assuming that tourism rebounds to reach its prior level but does not exceed it.

So far this year, Planet 13 has broken its sales records for each of the past three consecutive months. If that's not a positive sign, nothing is, and it points to a strong earnings report coming up for the second quarter. (That said, management hasn't yet announced when the Q2 earnings report will drop, so investors might need to wait until later in the summer.)

In the long term, it'll need to demonstrate stronger and more consistent profitability to wow shareholders, but in the meantime, it has $141 million in cash as a runway, so it shouldn't have much trouble.

Overall, I think that Planet 13 is a good purchase for investors looking to add exposure to the cannabis industry to their portfolio. Its growth over the next year will look especially strong as a result of its economic recovery from the pandemic and the opening of a major new store, and there are no major roadblocks on the horizon as of yet.