Please ensure Javascript is enabled for purposes of website accessibility
Log In Help Join The Motley Fool
Free Article Join Over 1 Million Premium Members And Get More In-Depth Stock Guidance and Research
By Brett Schafer - Jun 21, 2021 at 9:40AM

The audio platform continues to sign shows to multimillion-dollar deals.

The global podcast industry is estimated to be worth around $10 billion and is growing rapidly each year. The steady rise of podcasts as the next step in audio entertainment has attracted many businesses to the space, but music streamer Spotify (SPOT -4.95%) has been the most aggressive. From starting its own advertising network to buying studios and distribution platforms, the Swedish company is pouring hundreds of millions, if not billions, of dollars into podcast initiatives.

One headline-grabbing tactic has been Spotify's multimillion-dollar deals with popular content creators to host them exclusively on Spotify. With such major investments, can Spotify make this exclusive strategy work? A few years ago, Spotify started signing podcasts to go exclusive on its platform. One of the most high-profile deals was The Joe Budden Show, which signed with Spotify in 2018 but has since moved off the platform due to payment disputes. In 2018 and 2019, it looks like the company was just testing the waters with this exclusive strategy, but in 2020, its pace of exclusive deals has started to increase.

The momentum started with a two-year, $100 million deal to bring The Joe Rogan Experience, the most listened-to podcast in the United States, exclusively to Spotify starting last December. It has also signed Barack and Michelle Obama, Kim Kardashian, and Prince Harry and Meghan Markle to podcast deals. Most recently, the company announced it has signed Dax Shepard's Armchair Expert and Alexandra Cooper's Call Her Daddy, the 18th and 15th most listened-to shows in the country, respectively, to go exclusive on Spotify this summer.

Spotify is investing tons of money to get shows onto its platform. Investors have to evaluate whether the company will get a strong return on these investments -- here's how management is likely thinking it can make money on these deals.

How the unit economics will work

The obvious reason Spotify would sign exclusive deals is that it wants the listeners of these shows to move from other podcast apps to Spotify. It can then make money directly off these programs by getting them on its new advertising platform called the Spotify Audience Network.

For example, let's look at the recent Call Her Daddy deal, which is for three years and $60 million. If the show averages three million listeners a week, at a $50 CPM (the dollar payout per thousand ad impressions, the standard measurement in podcast advertising), that is $150,000 in sales per week, or $7.8 million annually.

This may look low relative to the $20 million Spotify is shelling out to make the show exclusive each year. However, what a lot of investors aren't considering are the indirect benefits of bringing a show like Call Her Daddy to Spotify. For one, if it convinces people to listen to all of their podcasts on Spotify, the potential for advertising revenue is a lot higher than what Spotify is getting from direct listens of that specific show, especially when looking at a multi-year time horizon.

It will also help advertise Spotify's ad-free music subscription, which is where it currently makes the majority of its revenue. The more free users it gets listening to podcasts on the service, the closer they are to paying up for the monthly subscription.

These indirect benefits, while hard to quantify, show how these large exclusive deals can be profitable for Spotify. Investors shouldn't think of them purely as content deals but as customer acquisition tools to get more and more people to listen to podcasts on Spotify and/or subscribe to its paid music tier.

The importance of podcasts to Spotify's financials

Spotify is also betting heavily on podcasts, because they can help the company increase its gross margins. Due to the high payouts the company makes each year to music labels and artists, Spotify's gross margins have not gone much higher than 25% over the last few years, and will struggle to expand much more since these variable costs scale every time it adds a subscriber to its service. 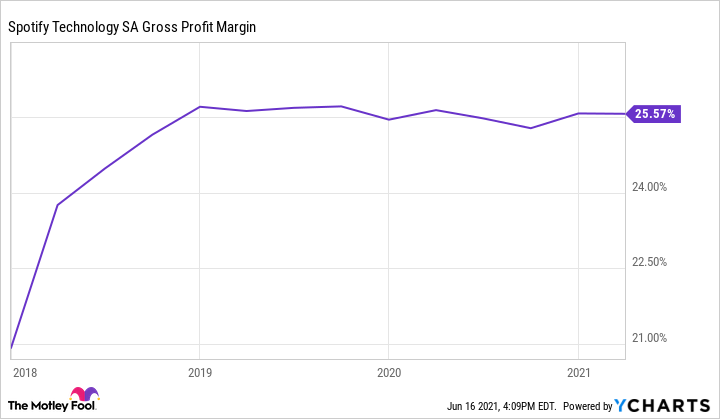 Podcasts free up Spotify from these high variable expenses -- that is, if it can execute on expanding its advertising network through its internal studios, exclusive shows, and the distribution services it owns (Anchor and Megaphone). Management is guiding for gross margins to rise to 30% to 40% in the intermediate term with a lot of that expansion due to its podcast investments.

Podcasts also give Spotify optionality with its premium subscription service. If and when it ever decides to make shows exclusive to premium subscribers only, that will give it more pricing power versus other streaming services from Apple or Amazon.

Spotify is the leader in music streaming, a fast-growing market with years of runway ahead of it. However, if it wants to become a dominant audio platform and start generating meaningful profits and free cash flow, the company is going to have to win the race in podcasts as well. These exclusive deals, while expensive, are a great step to helping it achieve these goals.