This company is going after a gigantic market and is returning lots of cash to shareholders.

The growth of the internet has gone on unabated for nearly three decades. Companies that sell the hardware that forms the backbone of the internet, called networking infrastructure, have seen a consistent rise in demand. One underfollowed stock in this space is Ubiquiti (UI 1.45%). Founded back in 2003 by an ex-Apple engineer, the company is trying to disrupt and displace some of the legacy infrastructure providers like Cisco Systems (CSCO 1.55%). 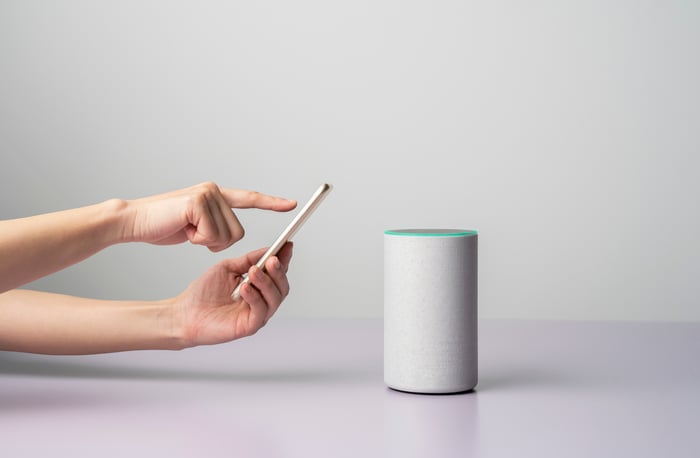 The networking infrastructure market has many different niches, and Ubiquiti operates in a few of them. One is Wi-Fi hardware. Its UniFi product line sells high-quality equipment that enables people and businesses to access wireless internet services.

Another large segment is cameras and security systems. Ubiquiti sells smart cameras and doorbells to help individuals and enterprises improve their security. And of course, these products all integrate to UniFi hardware as well. On top of these hardware products, Ubiquiti provides software applications to its customers so IT teams can constantly monitor their networks and security systems.

Lastly, Ubiquiti sells hardware to internet service providers (ISPs) to help them distribute and monitor the internet in their communities.

Ubiquiti has many competitors, including Netgear, Juniper Networks, and Dell Technologies, but its main competitor is Cisco Systems. The technology giant has been the market leader in networking infrastructure for decades. In fact, Cisco claims that 85% of internet traffic travels across its systems. The company had $49 billion in sales and $10 billion in net income over the past 12 months.

I mention Cisco's financials because they illustrate the large opportunity Ubiquiti is going after. According to Statista, the global networking infrastructure market is supposed to reach $227 billion by 2025. Ubiquiti serves only a small fraction of this market, and doesn't operate in every market globally, but this is a gigantic industry nonetheless. If it can continue to take market share from incumbents like Cisco, Ubiquiti should be able to grow its business for the foreseeable future.

Strong growth, but a high valuation

Speaking of growth, Ubiquiti has grown its top and bottom line consistently since going public in 2011. Revenue hit $1.7 billion over the last 12 months, and net income was $555 million. A 32.6% net margin is high for a hardware company, especially considering that revenue grew 38% over the last 12 months as well.

On top of this consistent growth, Ubiquiti continues to return cash to shareholders in the form of dividends and share buybacks. Its dividend yield sits at around 0.5%, and management has raised its dividend payout each of the last three years. Buybacks are a mainstay at Ubiquiti. Since 2015, its share count has gone from around 88 million down to 62.8 million, where it sits today. If Ubiquiti continues to grow its consolidated profits, this slowly shrinking share count will be beneficial to investors as it helps increase earnings per share and free cash flow per share. 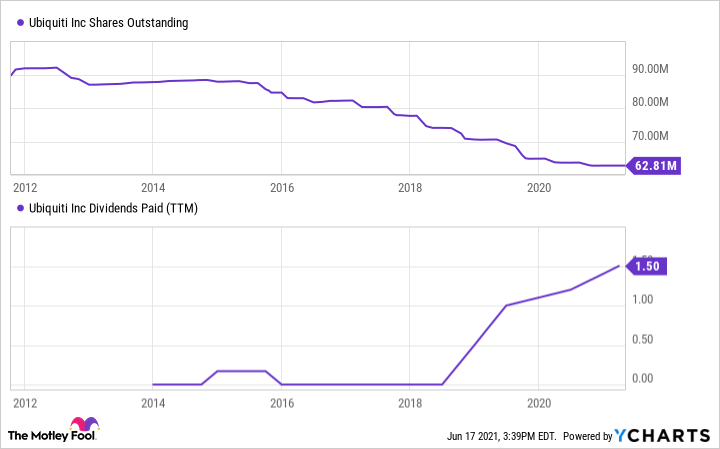 As you might expect, due to the company's strong financial performance, Ubiquiti stock trades at a premium valuation. With a market cap of $20 billion, its price-to-earnings ratio (P/E) sits at 36. This isn't a crazy-high multiple, but it isn't dirt cheap, either. However, as a potential investor, if you believe Ubiquiti can continue growing its market share in networking infrastructure while also returning cash to shareholders through buybacks and dividends, this P/E of 36 might look cheap a few years from now. For these reasons, it might not be too late to buy shares in this technology disruptor.