Shares of the recent IPO jumped on bullish analyst coverage.

Shares of FIGS (FIGS 0.78%) jumped 17.1% today after the maker of medical scrubs received a slew of positive analyst notes.

The good news came as the quiet period for analyst coverage lapsed following the company's IPO in May. 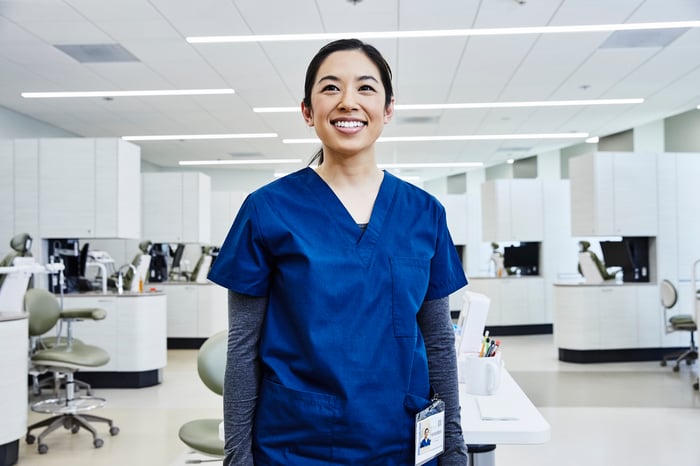 At least seven analysts gave FIGS positive ratings this morning, calling the stock a buy or rating it an outperform. Among the analysts weighing in was Piper Sandler's Erinn Murphy who gave the stock an overweight rating and a price target of $44, just slightly above the $42.61 it closed at today. Murphy said FIGS is "uniquely positioned as a growth brand" and is disrupting the $79 billion medical apparel industry.

Cowen's John Kernan called the stock an outperform and said the company's guidance was conservative. Kernan predicted that the company would triple revenue to $1.1 billion by 2025, and its market cap would exceed $8 billion. FIGS closed the day with a market cap of $6.8 billion.

FIGS has now nearly doubled from its $22 IPO price after the company debuted on May 27. The company offers an interesting opportunity in a corner of the apparel market that's rarely considered. FIGS' revenue growth has been impressive, accelerating during the pandemic last year to rise 138% to $263.1 million, following 102% revenue growth in 2019. However, it won't be easy to sustain a triple-digit revenue growth rate in the apparel industry as the sector doesn't have the same scalability of, say, the tech sector.

Even the forecasts of the most bullish analysts indicate that the stock may be ready to take a breather after nearly doubling in less than a month.

3 Reasons Figs Is a Buy

1 Bargain Buy That Just Got Crushed

Why Figs Stock Is Crashing Today