Please ensure Javascript is enabled for purposes of website accessibility
Log In Help Join The Motley Fool
Free Article Join Over 1 Million Premium Members And Get More In-Depth Stock Guidance and Research
By Royston Yang - Jun 23, 2021 at 6:07AM

These three companies have attractive prospects that make you want to snap up their stock this instant.

Investing involves more than just looking at financial numbers and ratios. A company also needs to possess a strong competitive moat along with a good growth story to make it attractive. All these attributes need to be evaluated in totality to determine if a company makes a great investment candidate.

The pandemic has undoubtedly dampened consumer demand and wreaked havoc on a large swath of businesses. However, there's also been a crop of companies that have either been quick to adapt to changing conditions, or whose businesses enjoyed a strong boost from trends accelerated by the crisis.

Here are three stocks that are displaying strong growth momentum that looks set to continue in the years ahead. 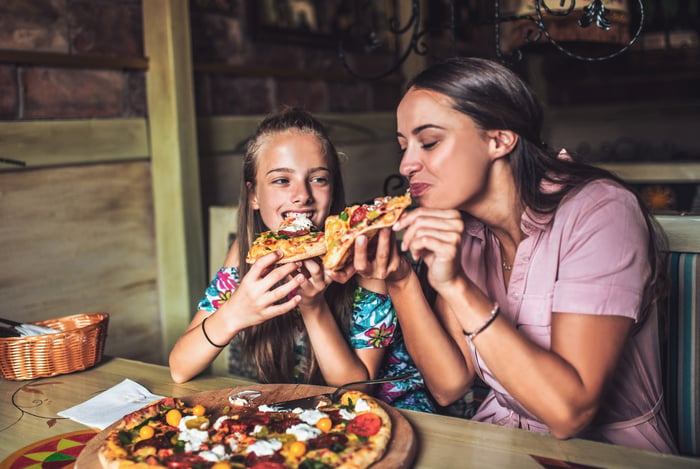 If you're hungry and are longing for a piping hot pizza, there's a high probability you'll dial up Domino's Pizza (DPZ -0.34%) to place an order. The world's number one pizza chain operates retail stores in more than 90 markets globally and has seen both its top and bottom lines powering upwards over the years. Domino's total revenue grew from $2.2 billion in 2015 to $4.1 billion in 2020, while its net income more than doubled from $192.8 million to $491.3 million.

The company's steady and consistent growth has been accelerated by the onset of the pandemic as more people telecommute and study from home. Its growth momentum has carried on in fiscal 2021's first quarter, with revenue up 16.7% year over year amid positive domestic and international same-store sales growth. Domino's has demonstrated that it can navigate the crisis well, with the recent news that it has launched robotic delivery services in the U.S. to cut down the risk of transmission through human contact.

A total of 175 net new stores were opened during the quarter, taking the total store count to 17,819. The company has identified the potential to increase the number of stores in the U.S. to around 8,000 from the current 6,391, with another 5,300 more stores that can be opened in its top 15 markets. The pizza giant's revenue and earnings look set to continue its growth trajectory in tandem with its new store openings.

Fitness equipment provider Peloton (PTON 0.00%) saw demand explode for its exercise bikes and treadmills as the pandemic's movement restrictions forced people to exercise at home. The company's connected fitness subscription service also includes guided workouts by certified trainers that customers can easily follow. These two factors contributed to the popularity of Peloton's products and services and resulted in a surge in the number of members signing up on its platform.

For its fiscal 2021 third quarter, Peloton's membership base grew to over 5.4 million, more than doubling from the 2.6 million a year ago. Connected fitness subscriptions also more than doubled from 886,000 to 2.1 million, underscoring the huge demand for home fitness sessions as more people kept fit from home. Total workouts more than tripled year over year during the quarter to 149.5 million. Peloton's revenue has increased sharply in line with the rise in its member base and workouts, with revenue for the first nine months of the fiscal year soaring 153% year over year to $3.1 billion.

Early May saw the company experiencing a rare hiccup as it recalled its Tread and Tread+ treadmills due to a high risk of injury. Customers who purchased both products were also offered a full refund. This incident is a one-off and should not permanently tarnish the company's reputation. Investors can look forward to better growth prospects as Peloton has completed its acquisition of Precor, a commercial fitness equipment manufacturer, for $420 million. The company is also committing $400 million to build its first U.S. factory that will be ready by 2023.

If you're looking for a company with a front-row seat to Asian growth, then Sea Limited (SE 1.42%) ranks high on the list. The Singaporean technology business has three key segments: e-commerce branded under Shopee, a gaming division called Garena, and a digital payments division called SeaMoney.

For its fiscal first quarter, Garena saw its quarterly active users surge 61% year over year to 649 million, while its quarterly paying users, a more crucial metric, more than doubled year over year from 35.7 million to 79.8 million. Impressively, the company's self-developed mobile game, Free Fire, continued to be the highest-grossing game in Latin America and Southeast Asia.

Sea's e-commerce arm is also growing by leaps and bounds, with gross orders up 153% year over year to 1.1 billion and gross merchandise value doubling over the same period to $12.6 billion. There was also more than 26.1 million quarterly paying users for the company's digital wallet, up 145% year over year, as its digital payments division saw increased adoption. Sea is firing on all its cylinders and is seeing healthy growth momentum powered by a surge in internet adoption by Asian countries. With a still vast population to tap on, Sea has room for deeper penetration into the region along with significant room for further growth.