Please ensure Javascript is enabled for purposes of website accessibility
Log In Help Join The Motley Fool
Free Article Join Over 1 Million Premium Members And Get More In-Depth Stock Guidance and Research
By Rekha Khandelwal - Jun 24, 2021 at 7:32AM

A biofuel producer and a solar component specialist are well-placed to benefit from a transition toward renewables.

The U.S. Energy Information Administration expects renewables to become the biggest source of primary energy worldwide by 2050. No wonder investors as well as analysts are upbeat about renewable energy, resulting in high valuations of several renewable energy stocks. In particular, Wall Street analysts estimate an average 37% upside for Renewable Energy Group (REGI) and a 20% upside for Enphase Energy (ENPH -3.41%) stock.

But sectoral tailwinds alone aren't enough to make a stock a buy. Let's take a closer look at the two stocks to find if they are quality stocks to buy and hold for the long-term or not.

Renewable Energy Group is the largest producer of biofuels in North America. The company's 12 biorefineries -- 10 in the U.S. and two in Germany -- use corn, soybean, inedible animal fats, etc., as feedstocks. 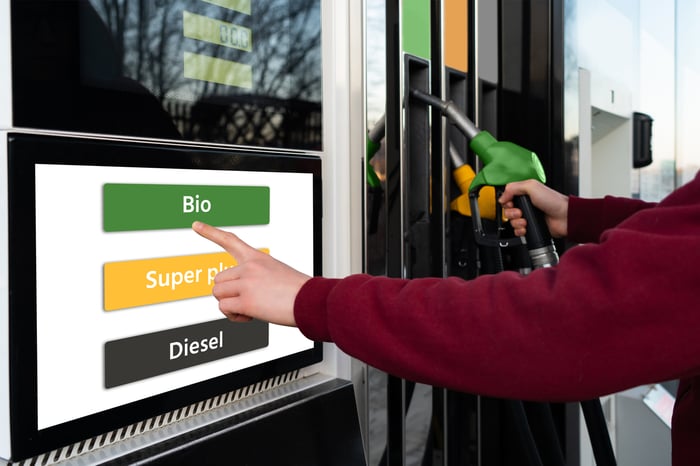 Earlier this month, The Fly reported that Citi analyst Prashant Rao expects Renewable Energy Group's returns on invested capital to double over the next three years due to its new projects. He has given the stock a price target of $90, higher than analysts' consensus target of $88.4. Renewable Energy Group's increased focus on renewable diesel has also made analysts upbeat on the stock. 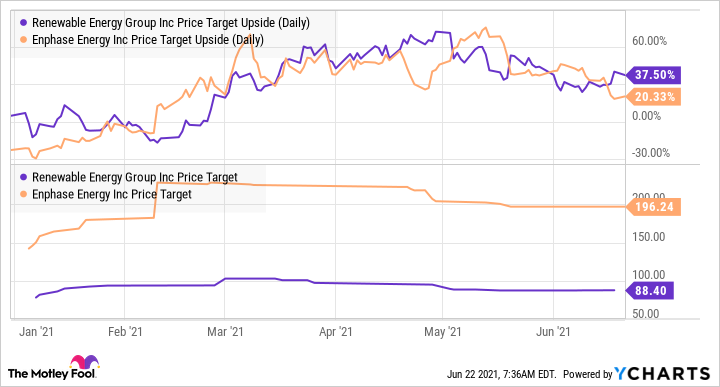 Numerous factors are driving the growth in demand for biofuels. The first is the push from governments. Clean fuel standards of various kinds are in effect in a number of states across the U.S. In North America, the demand for bio-based diesel may more than double from 2.9 billion gallons in 2020 to 5.9 billion gallons by 2030. Globally too, governments are focusing on reducing carbon emissions. The European Commission's Renewable Energy Directive (RED II) has set a target of 14% renewable energy use in transport by 2030. Other incentives such as a biodiesel tax credit and fuel standard are providing support to biodiesel producers like Renewable Energy Group.

The positive demand outlook for biofuels has attracted several large players in the energy industry into this segment, including top crude oil refiners Phillips 66 and Valero Energy. That's significantly amping up the competition for Renewable Energy Group. It could also lead to an oversupply in the medium term, which would put pressure on margins for all the players. However, Renewable Energy Group has certain advantages over newer entries to the segment.

The company has more than two decades of experience as a biodiesel producer. Its sizable network of facilities offers it several benefits. It can adjust its processing facilities to use different feedstocks based on changes in feedstock pricing, which gives it a cost advantage. Not many of its competitors have as much flexibility.

In addition to biodiesel production, Renewable Energy Group is focusing on downstream expansion. In 2019, the company opened its first own-branded fueling station. In its downstream operations, it aims to expand its margins through branded sales, by directing its production to geographies with most demand, and by blending biodiesel into petroleum and renewable diesel. 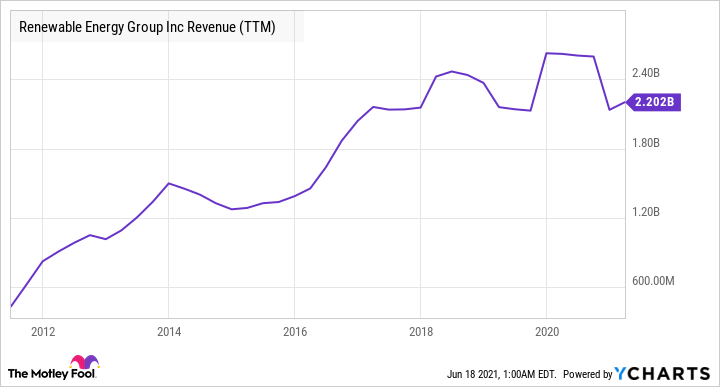 The capacity expansion of its biorefinery in Geismar, Louisiana, from 250 million gallons per year to 340 million gallons per year will also be a growth driver for the company. This plant produces renewable diesel, which generally commands a premium price compared to biodiesel due to its better ability to blend with petroleum diesel and its better performance in cold weather.

Renewable Energy Group has grown its revenues consistently over the years. Industry expertise, feedstock flexibility, large-scale operations, and its expansion in the downstream and renewable diesel segments position it well to continue doing so. No wonder analysts are upbeat on this stock.

Microinverter supplier Enphase Energy is a fast-growing company in the solar sector. A strong revenue and earnings growth backed by robust demand for its products has made analysts upbeat on the stock. However, it saw some downward price target revisions after its Q1 results, mainly on concerns of overvaluation. Despite that, the consensus price target right now implies a 20% upside from current levels.

In the first quarter, Enphase Energy increased its revenues by 47% year over year. That's a big achievement considering that rival SolarEdge Technologies' (SEDG -1.46%) revenues fell by 6% last quarter. Moreover, Enphase's U.S. revenue grew 38% in Q1, while SolarEdge's North America sales slipped. Enphase Energy derives more than 80% of its revenue from the U.S. market, and higher growth here can give it a significant edge over competitors in the long term.

Enphase Energy's newer power storage product should add a further tailwind to its growth. Batteries offer an easy cross-sell opportunity to the company. 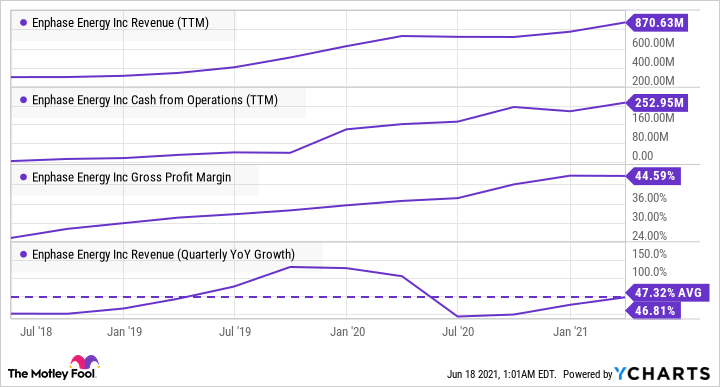 Enphase has been growing its quarterly revenue at an average rate of 47% over the last three years. Cash from operations grew steadily during this period, too. In addition, its gross margins are strong and trending higher, which the company attributes to its disciplined product pricing and its cost management.

Enphase Energy stock is trading down by more than 20% from its high early this year. Concerns relating to semiconductor supply constraints, which may hamper the company's growth in the second quarter, have contributed to the stock's fall. The decline also reflects some profit-taking by investors after the stock's significant rise during the last year.