Please ensure Javascript is enabled for purposes of website accessibility
Log In Help Join The Motley Fool
Free Article Join Over 1 Million Premium Members And Get More In-Depth Stock Guidance and Research
By John Ballard - Jun 25, 2021 at 7:15AM

These digital enablers continue to post stellar financial results. But which one is the best investment?

The pandemic accelerated the shift to digital services for many businesses, but the digital transformation continues to roll on in 2021. Both Adobe Systems (ADBE 1.20%) and Shopify (SHOP -2.26%) are leading the charge by offering innovative solutions in digital media and e-commerce.

Shopify has been the much faster grower, and that's reflected in the stock's performance. In 2020, Shopify's stock price rocketed up 184%, beating Adobe's return of 51%. Both companies reported stellar financial results in the most recent quarter. Shopify has continued to outperform Adobe in 2021, with the share price up 31.6% compared to 15.5% for the PDF inventor.

Will Shopify continue outperforming Adobe? Let's compare the two companies to find out. 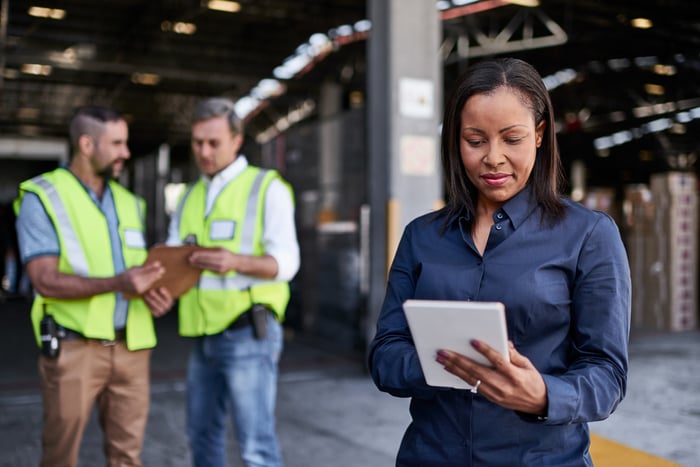 Adobe is seeing healthy demand trends for its Creative Cloud services, which include flagship products like Photoshop, Illustrator, and Lightroom. Students, artists, photographers, and other professionals continue to get more work done on their mobile devices, which is fueling demand for Adobe software.

Adobe is also seeing momentum with Document Cloud, including PDF documents and e-sign products. There were more than 300 billion PDFs opened in Document Cloud apps in 2020. The number of signed transactions in Adobe Acrobat spiked over 300%. The shift to remote work has obviously been huge for Adobe, but the long-term market opportunity is still significantly higher than Adobe's current annual revenue.

Adobe generated $14.4 billion in revenue over the last four quarters, but management estimates the addressable market for Acrobat applications alone at $11 billion. Adding in Creative Cloud and the company's business products (Experience Cloud), Adobe's total addressable market is estimated at $147 billion. In other words, Adobe can grow its business for a very long time, which could make the stock a great investment.

From a financial perspective, the appeal of Adobe's business to investors is its high-recurring revenue stream. Adobe generates virtually all its revenue from subscriptions, which made up 90% of Adobe's total revenue in fiscal 2020. This subscription-based business model leads to robust amounts of free cash flow that can be returned to shareholders through share repurchases or reinvested in the business in new software and features to create more demand.

Shopify is still reporting tremendous growth rates in revenue following the surge in demand for its services during the pandemic. In the first quarter, Shopify reported a revenue increase of 110% year over year, which came on top of a 47% increase in Q1 2020.

There are 1.7 million businesses that rely on Shopify to provide them a digital storefront for selling online. Shopify also offers valuable services, including payment processing, shipping solutions, and email marketing, that help merchants grow their businesses. These business owners are experiencing tremendous success with Shopify, as noted by the 137% surge in Merchant Solutions revenue last quarter. This reflects the trend of merchants increasingly adopting additional services that Shopify offers.

Most businesses start out with a subscription plan to use Shopify's platform for less than $50 per month. But as merchants have success, they tend to adopt more services, such as Shopify Capital and Shopify Shipping, which generate higher margins and pad the bottom line.

Before the pandemic, Shopify was consistently unprofitable, but the growth in Merchant Solutions has started to affect the company's profitability in a big way. Over the last year, free cash flow totaled $615 million. That's a free cash flow margin of 17.8%, which isn't as high as Adobe, but Shopify could see its margin head higher down the road as merchant solutions continue to grow faster than subscription revenue.

Is Shopify worth its premium?

Shopify looks very expensive no matter which way you slice it. On a price-to-sales basis, the stock trades at a nosebleed multiple of 54, compared to Adobe's 19.2. Even if Shopify converted 35% of its revenue into free cash flow, it would still command a P/FCF multiple of 154.

Shopify may be able to justify its lofty price tag. After all, e-commerce still makes up a small share of the $23 trillion global retail market. Sometimes great companies continue to trade at high valuation multiples for many years.

From my observations, the companies that serve the widest market tend to deliver the best gains over the long haul. Since both growth tech stocks trade at high valuations relative to their recent growth, I would buy the faster-growing business that is serving a multi-trillion global e-commerce market, and that would be Shopify.