Please ensure Javascript is enabled for purposes of website accessibility
Log In Help Join The Motley Fool
Free Article Join Over 1 Million Premium Members And Get More In-Depth Stock Guidance and Research
By Reuben Gregg Brewer - Jun 25, 2021 at 9:47AM

The two U.S. energy giants have taken off in 2021, but Exxon's stock has performed much better. Does that make it the better buy?

Oil prices are rising sharply as demand recovers from coronavirus-related economic shut downs. Chevron's (CVX 0.14%) stock is up around 25% so far in 2021 while peer ExxonMobil's (XOM 0.87%) shares have rallied a dramatic 50%. Should energy investors get on board Exxon's momentum train or does Chevron offer a better opportunity to invest in oil today?  Here's a quick look at what investors should be thinking about as they decide.

1. Similar in many ways

To be fair, the differences between Chevron and Exxon are actually pretty few. That fact is that they are both integrated oil and natural gas giants that operate on a global scale that would be very difficult to replicate today from the ground up. Exxon is the larger of the two companies by market cap, weighing in at $260 billion. Chevron's market capitalization is roughly $200 billion. Both have assets across the industry, from the upstream (drilling) to the downstream (chemicals and refining). The goal of this diversification is to help smooth out the cyclical energy industry's typical ups and downs. 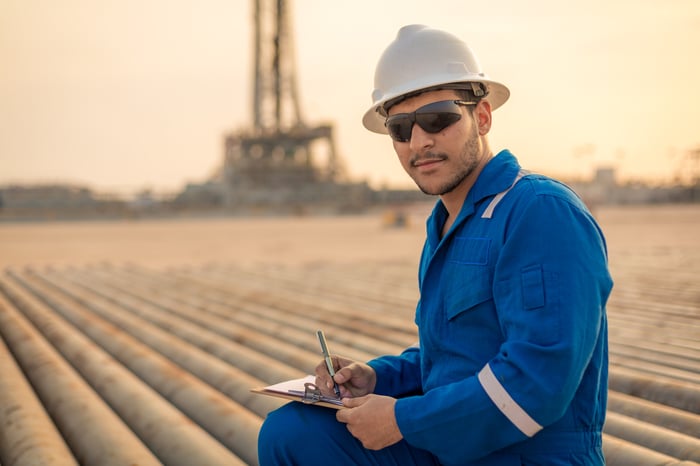 They aren't exactly interchangeable, but buying one or the other is about nuances, not broad brush strokes. Basically, if you are looking to own a large integrated energy major, either one would probably suit your purposes. And neither would likely be a huge mistake.

There's a very modest difference on the dividend yield front, with Exxon offering a 5.6% or so yield and Chevron 5.2%. For some dividend investors that might give Exxon the edge here, assuming that maximizing the income your portfolio generates is the primary goal. That said, Exxon also has a longer track record of regular annual dividend increases, with its streak currently sitting at 38 years. Chevron, however, isn't far behind at 33 years. Notably, they are both Dividend Aristocrats. That said, the cyclical nature of the business is important to keep in mind, because during bad years both companies will lean on their balance sheets to fund their cash flow needs, including the dividends they pay. So it is hard to point to payout ratio as a measure of dividend strength here -- each board's proven commitment to its dividend is probably more important.

On that score, Chevron announced a 4% dividend increase in April. Exxon hasn't increased its dividend since the second quarter of 2019. Because of that mid-year increase, 2020's full-year dividend was higher than the full-year 2019 dividend. But if Exxon doesn't increase the dividend in 2021, its streak will come to an end. It has two quarters left. Chevron probably has a slight edge right now for those that favor consistent dividend growth.

That brings us back to the balance sheet, which is a pretty important issue for this pair of energy giants. Unlike European peers that prefer to carry heavy debt loads and large cash balances, Exxon and Chevron tend to have smaller cash balances and lighter debt loads. That gives them the leeway to issue debt during industry downturns, like they did in 2020, to generate the cash needed to keep operating. Historically Exxon had the industry's strongest balance sheet, but it has a dilemma right now: It has material spending plans that it needs to fund if it wants to keep production up. Chevron's spending needs aren't quite as material. So the pair have switched places. Chevron's debt to equity ratio, at 0.35% or so, is now lower than Exxon's roughly 0.4 times. 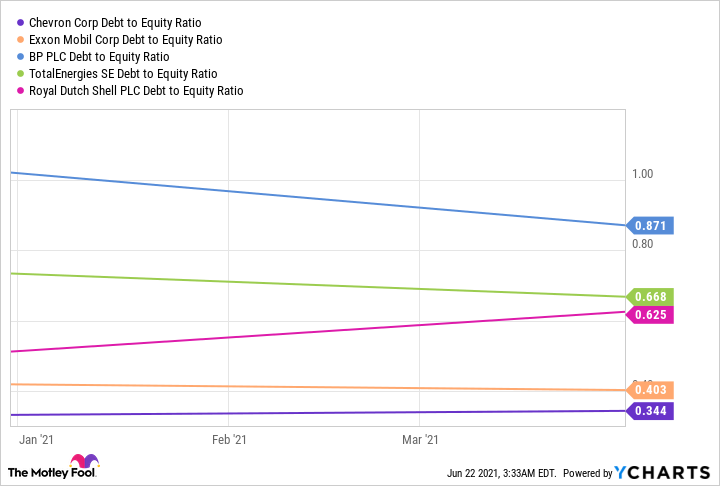 Neither number is outlandish, but there is a slight twist here. During 2020 Exxon had to cut spending. Chevron did the same, but it also acquired Noble Energy. It was an all-stock deal, but it required Chevron to take on Noble's debt. This opportunistic move has helped Chevron come out of the 2020 energy downturn a stronger company. That's a big difference from Exxon, which more or less muddled through. So, despite the similar financial strength, Chevron probably gets the edge here, too.

As already noted, neither of these two energy giants is likely to be a dramatically better or worse choice. Notably, both have chosen largely to stick to their knitting in the drilling space as opposed to shifting aggressively toward cleaner alternatives, like some of their European peers. But if you are a conservative investor looking for energy exposure, Chevron probably squeezes out the win thanks to its recent dividend hike, slightly stronger balance sheet, and that opportunistic Noble Energy acquisition.