Please ensure Javascript is enabled for purposes of website accessibility
Log In Help Join The Motley Fool
Free Article Join Over 1 Million Premium Members And Get More In-Depth Stock Guidance and Research
By Jason Hawthorne - Jun 25, 2021 at 9:00AM

If you've been bitten by the shiba inu, try investing in the type of dog that pays.

There are many different investment strategies. Until recently, buying a cryptocurrency started as a joke wouldn't have been on the list. Yet, Dogecoin (DOGE 8.83%) continues to garner attention despite falling 65% from its high. It's entertaining, but those looking to build wealth might be barking up the wrong tree.

Another approach is to buy high-yielding dividend stocks. The ones in the Dow Jones Industrial Average (^DJI 0.71%) with the largest payouts are often referred to as the "Dogs of the Dow." Two of these -- Walgreens Boots Alliance (WBA 2.36%) and Merck (MRK -0.01%) -- could give your portfolio a lot more bite if left to compound over time. Digging in reveals how. 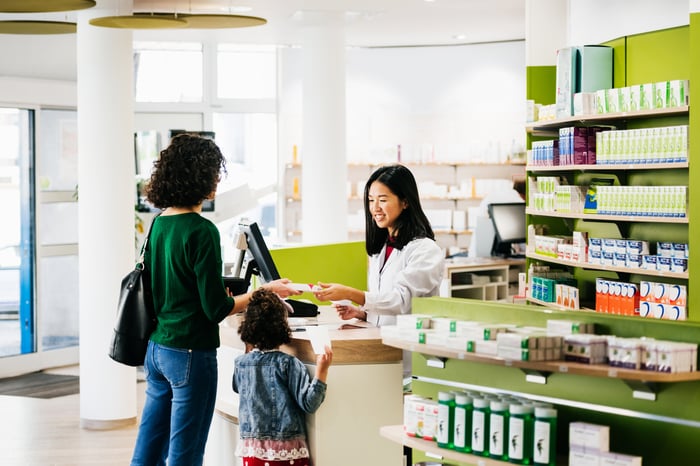 Most people are familiar with Walgreens' more than 9,000 retail pharmacies in the U.S. They may not know that the company has one of the largest pharmacy distribution networks in the world. It's made up of 425 distribution centers delivering to more than 25,000 locations across 20 countries. About three-fourths of the company's U.S. revenue came from that segment of the business. Globally, Walgreens generated about $140 billion in sales. That scale means it doesn't grow very fast, but it does generate a lot of free cash flow -- more than $4.1 billion last year, even during a pandemic. It gives a lot of that back to shareholders.

The company pays a little less than $0.47 per share each quarter, amounting to a 3.6% dividend yield. It has raised the payout for an impressive 45 consecutive years. It can be hard to think about the distant future when you're young, but those who bought and held the stock 30 years ago have turned every $1,000 into nearly $60,000. It won't generate that kind of return over the next three decades, but management is continuing to plan for the future. It's investing in automating pharmacy operations, embracing e-commerce, and launching its own branded financial services. For investors who want to fetch respectable gains, Walgreens might be a great addition to a portfolio.

Merck is a global pharmaceutical company best known for its asthma drug Singulair -- which went off-patent nearly a decade ago -- and cancer therapy Keytruda. The latter is one of the best-selling drugs globally, bringing in $14.4 billion in 2020. That was second to AbbVie's Humira. Keytruda is most commonly used to treat skin cancer, but has picked up approvals from the Food and Drug Administration over the years for various cancers like esophageal, lung, head and neck, and others. The drug accounted for 30% of the company's revenue last year. Keytruda's sales have grown quickly from just $1.4 billion in 2016 and it isn't done yet. The drug continues to march through clinical trials toward approval to treat other forms of cancer.

Merck sports a 3.4% dividend yield, distributing $0.65 per share each quarter. All told, it returned $7.5 billion to shareholders in fiscal year 2020, counting both dividends and share repurchases. That amounted to a roughly 4% total yield. The company has only been increasing the dividend since 2012, but an investor who bought $1,000 worth of stock back then would have about $2,100 today.

Merck will look a little different going forward. Its CEO for the past ten years, Ken Frazier, is retiring. Management has also spun out its women's health business, along with off-patent drugs and biosimilars, as Organon (OGN 0.55%). This spinoff allows it to focus on lucrative cancer therapies. Overall, the company has 23 programs in phase 3 trials and expects sales growth of between 8% and 12% this year. For those seeking stability and yield, the stock is worth a look. The combination of dividends and top-line growth make for an investment that isn't likely to chew up your returns.