Please ensure Javascript is enabled for purposes of website accessibility
Log In Help Join The Motley Fool
Free Article Join Over 1 Million Premium Members And Get More In-Depth Stock Guidance and Research
By Rich Duprey - Jun 25, 2021 at 8:15AM

The chicken wing chain is looking to ruffle some feathers in the industry.

Shares of Wingstop (WING 3.37%) were up almost 8% this week after the company launched a new virtual brand called Thighstop to help combat the rising cost of chicken.

Buying just chicken wings and breasts is much more expensive than buying a whole bird, so if it takes the entire chicken, and then uses all of the parts, it is a cheaper alternative. 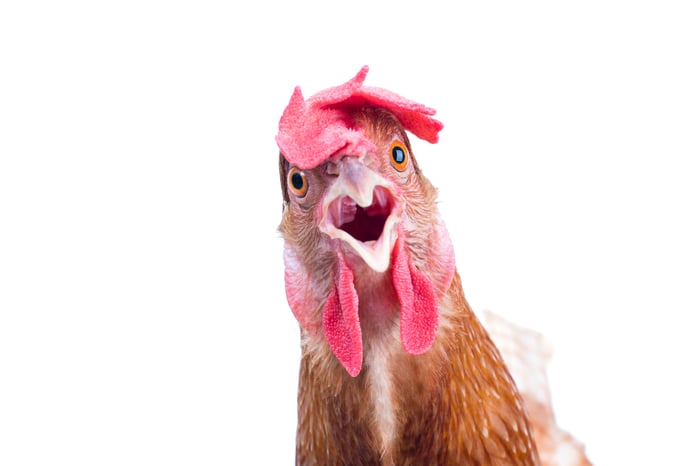 Chicken prices are at all-time record highs in 2021, surpassing the levels hit during an avian flu outbreak in 2014 and 2015 that led to widespread culling of flocks. Part of the reason for the sky-high prices is the increased demand for chicken from fast-food chains competing against one another in the chicken sandwich wars.

Another cause is consumers buying more chicken at the supermarket as all protein prices are soaring, partially due to the lingering effects of the pandemic. Also, meat processor JBS, which accounts for one-fifth of the country's entire meat supply, was hit by a ransomware attack. Beef prices are running 3% above where they were last year when there were shortages in grocery store meat cases and Wendy's was forced to remove burgers from its menu in some restaurants.

Thighstop is a virtual brand, meaning it won't have its own restaurants, but customers can order online and pick up or have their orders delivered at or from their local Wingstop chain. With some 1,400 locations, it gives the brand an immediate national presence, and puts it in competition with Yum! Brands' KFC chain.