Please ensure Javascript is enabled for purposes of website accessibility
Log In Help Join The Motley Fool
Free Article Join Over 1 Million Premium Members And Get More In-Depth Stock Guidance and Research
By Alex Carchidi - Jun 26, 2021 at 6:35AM

It's already a stunning success, and it's just getting started.

Back when its price was rising like a bottle rocket, Dogecoin (DOGE 2.15%) might have looked like a pretty good investment. While the cryptocurrency never had any fundamental value to speak of, investors found comfort in its upward momentum. More recently, when the Dogecoin hype faded, many people pivoted into Ethereum (ETH 2.10%), rightfully understanding that its utility in making smart contracts could retain value a bit better.

Unfortunately, even Ethereum collapsed from its heights in May, and its potential for recovery is uncertain. It's still possible that the cryptocurrency could become the financial tool that proves the real-world economic value of blockchain technology. But until that dream is developed a bit more, investors might have more luck if they invest in something entirely different, like a successful biotech that's on the road to becoming the capstone vaccine developer of the future. 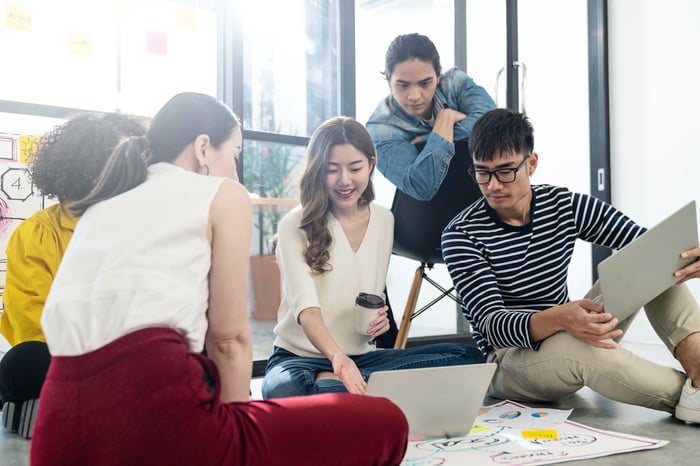 Coronavirus vaccines are just the beginning

People know Moderna (MRNA -3.78%) for its coronavirus vaccine, but the company's potential is far greater. The total global market for all vaccines was estimated by market research group Evaluate Pharma to be worth $35 billion in 2020. A large chunk of that market could be accessible by Moderna in the near future.

Using the same mRNA technology that it used to make its jab against the coronavirus, the company is already working on a slew of other protective vaccines against infectious diseases including HIV, cytomegalovirus, and mononucleosis. Its mRNA drug development platform makes the preclinical portion of the vaccine development process extremely quick and highly capital efficient, meaning that it can easily iterate prototypes and initiate new clinical programs to chase small and large infectious disease markets alike.

So, the platform is a major competitive advantage because it will allow Moderna to profitably target markets that might be too small for its competitors. And, because its vaccine technology can inexpensively address multiple immunological targets at the same time by including multiple mRNA sequences in the same jab, it might also be able to succeed where other technologies have failed, like with HIV.

One more thing that makes Moderna special is its therapeutic vaccine projects, which aim to treat diseases by training the immune system. Five of those projects are for cancers, which include its personalized cancer vaccine candidate for solid tumors. In this case, the company's mRNA technology meshes well with advances in genomics that allow doctors to understand the unique features of a patient's tumor at a molecular level. Whereas other cancer drugs might be prohibitively expensive or impossible to reconfigure to take advantage of these unique features therapeutically, Moderna's platform can tailor the vaccine against them efficiently. Hopefully, patients will massively benefit from the personalization process. But the program is still in phase 2 of clinical trials, so it'll be a while before it could be approved for commercialization.

Moderna is ready at the right place and the right time

In the long run, Ethereum could become a useful medium for doing business on the blockchain, which would support higher prices. That'd require much wider adoption of the technology, not to mention further development of the underlying protocol. Right now, however, Moderna's vaccine technology is making the company billions of dollars each quarter. As it churns out new programs and progresses them through the clinical trials process, its value will only rise further. What's more, it isn't facing any of the same regulatory scrutiny that cryptocurrencies are, and it's hard to imagine a situation in which its stock would be banned from being traded.

Nor is Moderna's stock price as volatile as Dogecoin or Ethereum. Best of all, it's possible for investors to actually calculate how much the stock is worth, unlike with the two cryptocurrencies. So, even if the things I've mentioned about its pipeline projects aren't convincing regarding its future prospects at its current price, it's still possible to look at the company's financials and decide for yourself what price would make it a good buy. Unfortunately for the cryptos, there's no method that'll alert you to whether more people will want to own them in the future, so there's no way to be sure you can avoid a big investor's headache one day.