Please ensure Javascript is enabled for purposes of website accessibility
Log In Help Join The Motley Fool
Free Article Join Over 1 Million Premium Members And Get More In-Depth Stock Guidance and Research
By Leo Sun - Jun 28, 2021 at 11:22AM

Realty Income and two other stocks will cut you generous checks 12 times a year.

Many companies pay quarterly or semi-annual dividends. However, certain stocks and exchange-traded funds (ETFs) pay monthly dividends, which might appeal to retirees who need stable income. Let's take a look at three rock-solid companies that will cut you a check each month.

Realty Income (O -0.16%) is a commercial real estate company that owns over 6,600 properties across the U.S. and U.K. It leases those properties to about 600 clients, including retail giants like Walgreens Boots Alliance, 7-Eleven, and Dollar General.

The company ended the first quarter of 2021 with an occupancy rate of 98%, even as many of its clients struggled throughout the pandemic. It deferred some rental payments last year, but its collection rate improved to 94.3% at the end of March. 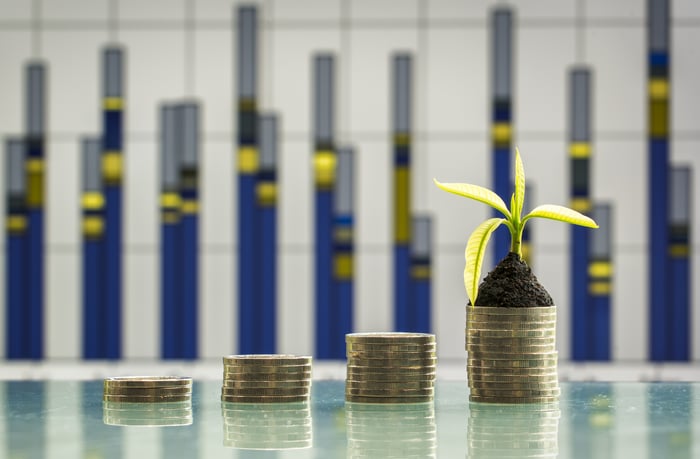 As a REIT (real estate investment trust), Realty Income must pay out 90% of its taxable profits as dividends to maintain a favorable tax rate. Its adjusted funds from operations (FFO), which REITs commonly use to gauge their profits, rose 2% to $3.39 per share in 2020. It expects that figure to rise 1.5%-2.9% this year to $3.44-$3.49 per share, which will easily cover its forward annual dividend of $2.83 per share.

Those monthly payments equal a forward dividend yield of 4.2%. Realty has paid out dividends for 611 consecutive months (that's almost 51 years), and it's raised its dividend for 95 straight quarters (almost 24 years). Realty's stock has stayed nearly flat over the past five years, but it generated a total return of over 220% after factoring in reinvested dividends -- so it's also a great choice for long-term investors who don't need monthly payments.

Prospect Capital (PSEC -1.59%) is a business development company (BDC) that holds private debt and equity in 123 companies across 39 industries. That diversification enables it to offset slowdowns in certain industries with the growth of others, and it generates most of its profits from interest payments on its secured and unsecured debt.

Prospect has funded over 365 investments and manages more than $6 billion in assets. Its net investment income (NII), a common measure of a BDC's growth, fell 15% to $0.72 per share in fiscal 2020, which ended last March, amid pandemic-related challenges. That figure stayed flat year-over-year in the first nine months of 2021, but analysts expect it to rise to $0.73 per share for the full year.

Prospect's NII should cover its forward annual dividend of $0.72 per share -- which translates to a hefty forward dividend yield of 8%. Prospect doesn't raise its dividends every year, but its NII growth should stabilize over the next few years as companies recover from the pandemic.

Like REITs, BDCs pay at least 90% of their taxable profits as dividends to maintain a lower tax rate. Prospect's stock price has only risen about 15% over the past five years, but it generated an impressive total return of nearly 110%.

The BlackRock Enhanced Capital and Income Fund (CII -0.74%) is an ETF that holds a basket of 58 stocks. Its top holdings include Alphabet, Microsoft, Amazon, and Apple.

Most of its top holdings pay low dividends or no dividends at all, so it might seem surprising that the ETF pays out monthly dividends that amount to a forward yield of 5.1%. It generates those dividends by constantly writing covered calls on its own positions.

For example, the fund might sell a covered call for Apple with a strike price of $150 and an expiration date of July 30. If Apple is still trading below $150 on that date, the call will expire and the fund will pocket the premium. But if Apple is trading at $200, it will need to sell its underlying shares for $150.

This approach might seem counterintuitive in a bull market, but it generates consistent gains when the market declines or treads water. Over the past five years, CII's stock has risen about 55% -- but it generated a total return of more than 115% with its reinvested monthly dividends. That stable growth rate arguably justifies its higher gross expense ratio of 0.91%.