Please ensure Javascript is enabled for purposes of website accessibility
Log In Help Join The Motley Fool
Free Article Join Over 1 Million Premium Members And Get More In-Depth Stock Guidance and Research
By Rich Duprey - Jun 28, 2021 at 7:38AM

There's a new opportunity to take this market even higher.

Forget whatever meme stocks internet chatroom traders are talking about this week, because they're mostly one-and-done events. A stock gets hot, everyone piles in, and then they move on with little to show for the effort.

To create lasting wealth, an investor should have a long-term mindset and be seeking out companies with long-term potential. That comes from having a solid business model preferably in an industry that is growing and will be around for years, decades even.

So while betting on beating hedge funds at the game they created might sound like fun, betting on gaming itself could actually be huge. That's why the esport stock below is a much better bet for your portfolio than any meme stock. 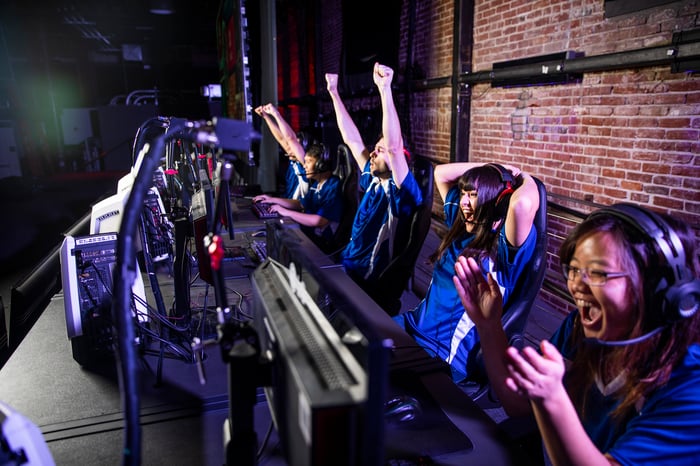 Esports is already big, but its potential is much greater. Global revenue for the industry is expected to hit almost $1.1 billion this year, up 14.5% from 2020, and data from Newzoo suggests over 75% of that figure, or $834 million, will come from media rights and sponsorships.

Major corporations such as GameStop, AT&T, and Hasbro are all lining up behind esports teams and leagues to be a part of the opportunity, because arguably the more important development is that the global livestreaming audience will grow to 729 million people in 2021, a 10% gain from last year, and one that will climb to 920 million by 2024. These companies want to ensure their brands are front and center.

Even though the COVID-19 pandemic essentially forced the cancellation of all in-person and tournament esports events last year, and such games will have limited avenues of participation this year, analysts see it growing at a 24% compound annual rate to hit $6.8 billion by 2027 -- with over 1 billion people tuning in.

Yet it's what comes next that makes it truly exciting.

The odds-on favorite for growth

Esports wagering is the industry's next-level opportunity. Last year Nevada expanded the betting options for esports in the state, and New Jersey -- which has become the sports betting capital of the country -- is poised to approve placing wagers on esport events. The state also recently approved financing the construction of an esports "innovation center" at Stockton University's Atlantic City campus to support industry research and development, technology innovation, and workforce development.

Betting on esports is now possible in about 15 states, and as more consider the potential of legalizing wagering on more traditional sporting events, esports will undoubtedly be tagging along for the ride.

That's why investors will want to keep an eye on Esports Entertainment Group (GMBL 4.00%), a company that bills itself as "the only esports-dedicated U.S. wagering platform."

As with just about any sportsbook with an esports offering, Esports Entertainment is taking a multi-pronged approach with three separate verticals.

Its namesake channel does not offer any casino gaming or sports betting, preferring to just focus on the opportunity presented by esports and keeping that vertical narrowly targeted to it. There's no real-money wagering occurring, but rather there's a skill-based tournament platform live in 41 states where skilled-based gambling is legal.

After monetizing its player relationships there, Esports Entertainment wants to migrate the players to its Vie.gg platform where actual betting can occur.  It's currently able to accept wagers globally in 149 jurisdictions, including Canada, Japan, Germany, and South Africa, and just signed an agreement with the Indian Gaming Esports Association to exclusively bring its esports technology and services to tribes and tribal casinos.

Esports Entertainment also entered a multi-year partnership with casino operator Bally's (BALY 1.59%) last year to launch its mobile sports betting platform in New Jersey. Sportsbooks in the state need to be partnered with a casino or racetrack to operate (Bally's sportsbook at its Atlantic City casino is operated by Flutter Entertainment's FanDuel).

Esports Entertainment announced last month that New Jersey's gaming regulators accepted its application to begin accepting bets on esports in the state. Though its software still needs to be tested by the regulator, Esports anticipates being able to accept bets by the end of its fiscal first quarter, which would be around September.

The company has a third vertical in online gaming and traditional sports betting with licenses in the U.K. and Ireland. 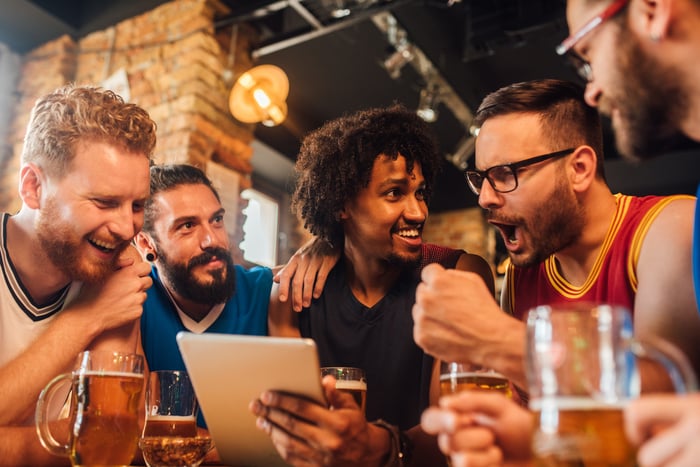 Esports Entertainment only went public last year, but it appears ready to seize upon the growth trends of esports, fan participation through live-streaming, and the potential to wager on the outcome of events. Revenue surged 129% sequentially last quarter to $5.4 million, with gross margin rising 135 basis points to 57%.

Its intense focus on esports could eventually make it an attractive takeover target by bigger sportsbooks, such as DraftKings, FanDuel, or even MGM Resorts, which is looking to turn its BetMGM sportsbook into the second largest in the country.

Yet even as a stand-alone operation, Esports Entertainment seems like a good bet to capture a large percentage of the interest in the industry's growth potential.