Please ensure Javascript is enabled for purposes of website accessibility
Log In Help Join The Motley Fool
Free Article Join Over 1 Million Premium Members And Get More In-Depth Stock Guidance and Research
By Rich Duprey – Feb 18, 2020 at 10:53AM

It would be the next logical step for the state since it legalized sports betting in 2018.

New Jersey just set a record for sports betting for the month of January with $540.1 million wagered, while sportsbooks saw their revenue rise nearly threefold to $54 million for the month.

While the NFL's Super Bowl championship game played on Feb. 2 undoubtedly had a lot to do with the amount of money wagered, the state has become the country's sports betting capital since the Supreme Court struck down the federal law prohibiting wagers on sports in 2018. Now New Jersey is looking to capitalize on that by expanding into esports. 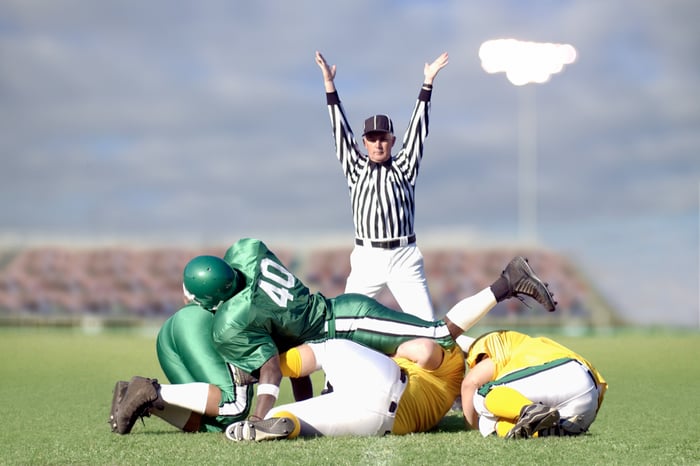 Esports is huge and getting bigger. Data analytics firm Newzoo says esports global revenue surpassed $1 billion in 2019, and viewership is expected to hit 646 million people by 2023, a 9% compound annual growth rate, according to Business Insider Intelligence. Moreover, the biggest names in technology, including Alphabet's Google, Apple, and Microsoft, are competing for market share for live-streaming esporting events.

China's Tencent is the world's biggest esports company, generating over $20 billion from the industry, but Sony is quickly gaining ground, while Activision Blizzard and Google are partnering to host esports events in the cloud.

In short, esports is a massive opportunity, which is why the gambling industry is naturally attracted to it.

New Jersey legislators recently introduced a bipartisan bill to legalize betting on esports, with a few exceptions, such as events sponsored by or affiliated with a high school, or ones where most of the competitors are under 18.

Using the state's 2018 sports betting legislation, the new law would expand the definition of a sports event to include any skill-based attraction, including awards competitions and even competitive eating contests. (Hey, hot dog eating contests could be big!) The law was previously changed to allow betting on video game tournaments where participants were adults.

The gambling enforcement division actually allowed sportsbooks to accept wagers placed on esports' League of Legends World Championship in Paris that ran from October to November.

Support for the bill is driven by efforts to help Atlantic City survive. The state has been in the forefront of making gambling more accessible, and spearheaded the drive to legalize sports gambling and eliminate Nevada's monopoly. It was also one of the pioneers in online gambling, which has been fueled by FanDuel, which partnered with the Meadowlands Racetrack, and DraftKings, which partnered with Resorts Atlantic City. Sportsbooks and online gambling sites have to be affiliated with either a physical casino or racetrack.

FanDuel and DraftKings, which recently filed for an IPO, control about 80% of the online market in the state through their partnerships with The Meadowlands Racetrack and Resorts Casino, respectively, though FanDuel is the biggest U.S. sportsbook with a 60% share. Yet only half of the state's 10 operators in New Jersey were able to report seven-figure sports wagering revenue in January. By expanding the law to include esports, it could make Atlantic City casinos much more popular with millennials.

Gambling at physical casinos appeals to an older demographic, but the group of gamblers who most often bet online are between the ages of 25 and 34, and make up over 35% of the total. In contrast, the average age of esports players ranges from around 21 for League of
Legends to about 25 for Super Smash Bros. Melee.

The average age of esports viewers is 28, which might be older than you'd suspect, but in comparison to major league sports championship games, where the average viewers are in their 40s, these are young whippersnappers. They also have money to burn, with an average income of $50,000 or more.

Esports betting is the next logical progression, and New Jersey could be a pioneer once again if it passes this bill. It has bipartisan support in the lower house of the legislature, and the state's gambling regulator fully supports its passage.

Because online gambling is the only real growth channel in New Jersey, extending the law to esports, which may then find more tournaments hosted in Atlantic City (the first one was held at Caesars Resorts casino in 2017), could be a major growth opportunity.