Please ensure Javascript is enabled for purposes of website accessibility
Log In Help Join The Motley Fool
Free Article Join Over 1 Million Premium Members And Get More In-Depth Stock Guidance and Research
By Jason Hawthorne – Jun 28, 2021 at 10:00AM

Its fast-growing platform is entrenched in physicians' workflows, and it's already turning a profit.

With so many stories happening at once in the financial markets -- inflation, jobs, meme stocks, cryptocurrency -- it would have been easy to miss the initial public offering (IPO) of a fast-growing digital platform for doctors. Investors who overlook it might be missing a transformational company before its growth really takes off.

Doximity (DOCS -1.08%) made its debut this week and promptly doubled on its first day of trading. The company has an enviable roster of customers, and financial results that set it apart from most other high-flying tech companies. Digging deeper highlights just how many things the company has going for it. 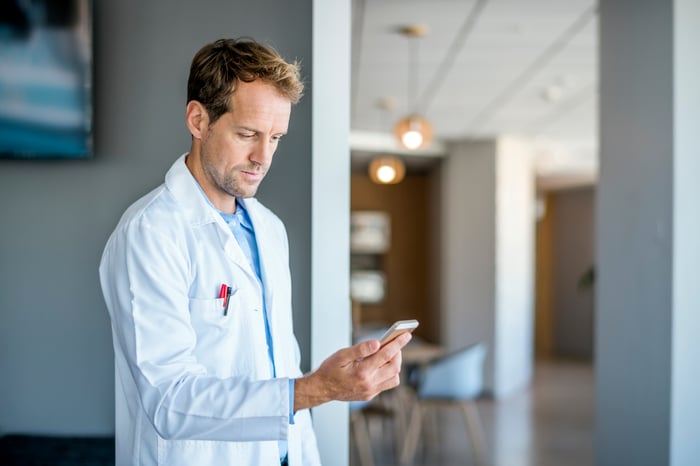 Impressive penetration in the industry

The company has been compared to LinkedIn for doctors. That's far too simplistic a description. But it's understandable since more than 80% of U.S. physicians are members. In fact, the company is so focused on doctors that it set aside shares and allowed doctors to participate in the IPO. More than 10,000 took advantage.

Its reach extends beyond individual docs. The company also claims to have the top 20 pharmaceutical companies, as well as the top 20 hospitals and health systems as clients. The extent of those relationships is unclear. But the ecosystem it is creating is quickly becoming an integral part of how many physicians perform their work.

Despite the comparison to a professional network, the platform offers many productivity tools beyond just connecting with other physicians. Co-founder and chief strategy officer Nate Gross jokes that the company is a mix of 'docs and dorks'. The combination is producing time-saving applications that doctors love.

For instance, the dialer tool allows physicians to contact patients from their cellphones while displaying their office number. This enables them to make the best use of their time while keeping personal information private. Similarly, the video dialer sends patients a 'no reply' text link for video calls. That extended the telehealth application it launched early in the pandemic.

The platform also has a newsfeed. It is a curated stream of the latest medical news and research. This feed can be highly targeted to a physician's specialty. The hiring solutions function offers a digital recruiting channel to help staff vacancies and manage their own careers. With over 100,000 reviews on Apple's App Store, Doximity rates a 4.8 out of five.

The platform is free to doctors. Revenue comes from paying clients such as health systems and pharmaceutical companies. That revenue is generated through subscriptions that tend to grow over time. The company's net revenue retention -- a measure of how much the same customers spend year over year -- was 153% for the year ending March 2021. That's outstanding. And it isn't the only impressive financial metric.

The company hasn't taken cash from investors for the past seven years. It turns out, it hasn't needed to. Not only is the company cash flow positive, Doximity has generated profits in each of the past three years. The financials show the platform is scaling nicely. As sales have grown, profit margins have expanded.

Despite the profits, investors will have to keep an eye on costs. In the three years the company shares in its initial filing with the Securities and Exchange Commission (SEC), both research and development and sales and marketing costs dropped as a percent of revenue. That could mean management didn't need to invest as much to grow. On the other hand, general and administrative expenses (G&A) have remained steady.

Headcount in the most recent fiscal year was up 139%, while G&A expenses climbed 122%. In its filing, management pointed to its acquisition of a healthcare staffing company as the culprit. At a price-to-sales multiple of 48, Wall Street expects management to spend money on growth. As the top line continues expanding, it will want to see those non-growth expense ratios come down.

Doximity's platform has the potential to play a unique role in the changing healthcare industry. With so much of a doctor's productivity dependent on technology built without user experience in mind, the company could be an important catalyst for reducing physician burnout. Similar to Veeva Systems' use of cloud computing to streamline the life sciences industry, Doximty could do the same for physician workflows. The industry has missed in most of its attempts to work smarter not harder over the years. Doximity might be the tool that changes that.

Why Doximity Stock Is Sinking Today