A presentation at a world congress seems to have given the flying taxi company a lift.

Shares of EHang Holdings (EH 2.58%) climbed roughly 11.4% on Monday, according to data from S&P Global Market Intelligence. The stock gained ground in conjunction with the company's presentation of its electric flying taxi at the Mobile World Congress (MWC) in Barcelona, Spain. 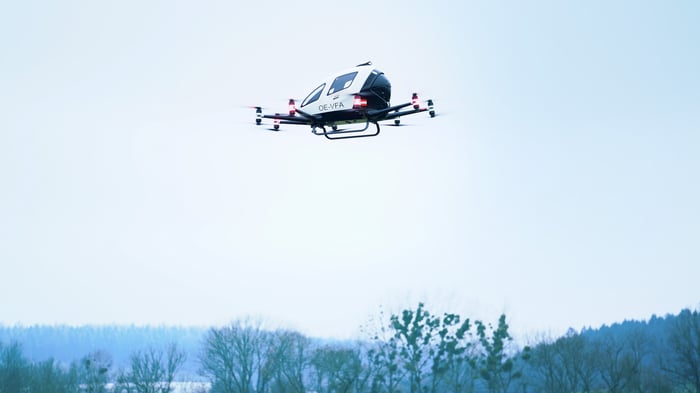 Andreas Perotti, the company's chief marketing officer in Europe, gave presentations and showed off the EHang 216, its electric-powered, autonomous flying taxi. In addition to the MWC exhibition, June has also seen investors rotate back into growth-focused technology stocks. It's unclear which factor played the bigger role in the stock's gains on Monday, but the market's overall appetite for risky growth plays could have a significant impact on the company's share price in the near term.

EHang stock soared early in 2021's trading as electric vehicle stocks rallied and excitement surrounding the company's flying taxis mounted. But its valuation was cut down as the market moved out of growth-dependent tech companies. A short report from Wolfpack Research suggesting that EHang was "an elaborate stock promotion" and that the company's sales contracts were "largely fabricated" didn't inspire investor confidence, either.

EHang is a young company in a market that's basically brand new, which makes it hard to gauge its performance outlook. If its flying taxi services take off, it could deliver fantastic performance over the next decade. But investors should proceed with the understanding that there's not much visibility into the company's future, and the stock looks like a risky investment.

Why EHang Stock Is Falling Today